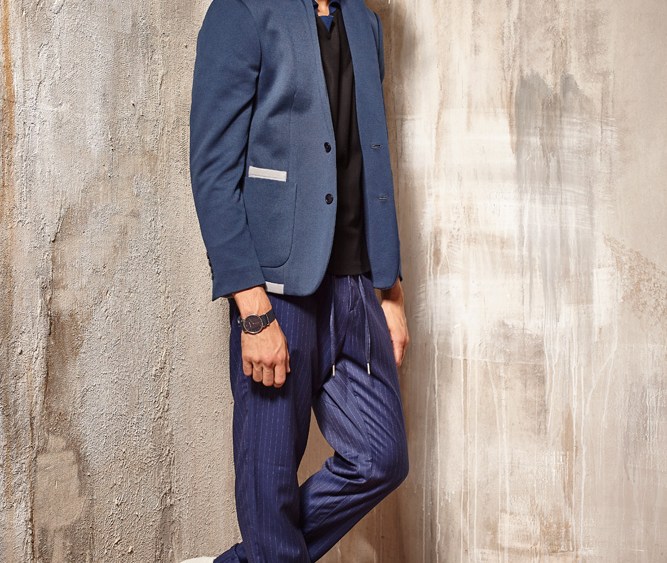 Canadian men’s designer Christopher Bates will be celebrating his 10th anniversary with a runway show Tuesday night during Toronto Fashion Week at the same time he reveals a deal with Nordstrom as the brand’s exclusive department store partner in Canada.

“Spring/summer 2019 is by far one of my most technically advanced collections and having it launch with such an iconic retailer as Nordstrom is a dream come true,” said Bates.

The spring collection is inspired by vintage tennis and cycling wear and includes a focus on technical fabrics and modern tailoring. Each piece is created with luxury textiles from Italy and include 3-D textured bomber jackets, jersey travel blazers, colorful knitwear and lightweight jackets and coats.

In addition to ready-to-wear, Bates has a bespoke business, working with a master tailor in Toronto to produce suits, tuxedos, jackets and shirts. For five seasons, Bates has partnered with Canadian specialty retailer Harry Rosen on a shoe collection, which will be rolling out from four to 10 stores next year, and he is creating a line of sneakers in collaboration with MTV that will launch next month. He also produces a line of unisex eyewear. He was tapped to create the uniforms for Air Canada that some 29,000 employees began wearing in March.

“When I first started my brand, everyone said it would take 10 years and they were right,” he said. “Everything is coming together at the same time and things are happening.”

To commemorate his anniversary, Bates said he has worked with a videographer who has documented his career since the beginning to create a three-minute retrospective that will be shown before the show tonight. The footage includes clips from his career as well as Bates talking about his journey. “It’s short and sweet, but I think it will be an interesting piece for people to see,” he said.

Looking ahead to the next decade, Bates said he hopes to capitalize on the momentum he is experiencing to grow further, both in terms of product categories and distribution. If the line performs as well as he expects at Nordstrom in Canada, he’s hopeful he’ll be given the opportunity to expand into the U.S. market with the department store retailer as well as others. “We got our foot in the door, now it’s up to us to do a great job,” he said.

Canadian-born Bates trained in Milan at the Istituto Marangoni and launched his men’s line in 2008. For four years, he has been headquartered in Milan.

Bates said in two weeks he will be traveling to China to meet with potential partners about expanding his collection into Asia. He hopes to one day open “monogram stores if I meet the right partner,” he said. Expanding into women’s wear is also in his sights for the future. “I would love to do women’s wear,” he said. “That’s one of my dreams.”

His signature Romeo dress shirt, which features a kiss print on the collar, has become popular with women and Bates produces it in women’s sizes as well.

Bates was the only men’s designer to be selected in the Mercedes-Benz Start Up Program, was a finalist for the Notable Awards for Fashion in Canada in 2014 and 2015 and most recently was nominated for Canadian Menswear Designer of the Year by the Canadian Arts and Fashion Awards.

Although Nordstrom is his department store partner in Canada, Bates’ collection is also sold in high-end boutiques including GotStyle in Toronto, ESPY in Calgary and Magenta Homme, New Time, Baglioni and others in Italy.

His collection has been worn by several actors and athletes including Don Cheadle, Michael Shannon and José Bautista.

Bates’ show will be held at Yorkville Village at 9 p.m. in Toronto.