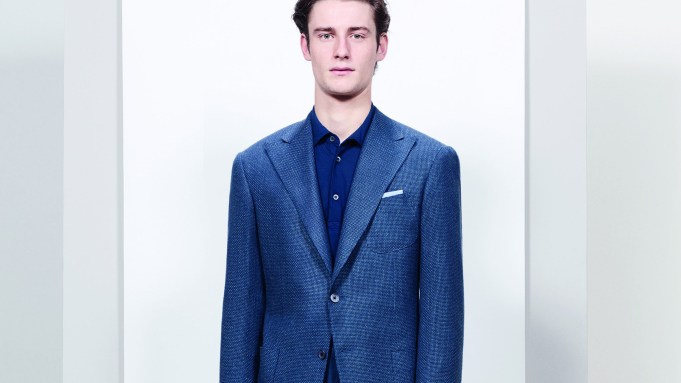 NEW YORK — There’s a new Corneliani in the offing.

Last June, the luxury Italian men’s brand sold a majority stake to Investcorp, the Bahrain-based investment group, in a deal estimated at around $100 million. Corneliani, founded in 1958 and still based in the northern town of Mantua, reported sales of more than 110 million euros in 2015.

Since the sale in mid-2016, the new owners have put together a whole new team — many of whom were poached from competitors — and the results are starting to become evident.

There’s a new creative director, head of North America and marketing chief, all of whom joined the brand over the past few months from Ermenegildo Zegna. In addition to a more-modern aesthetic in its collection, the re-branding campaign will include a new logo, packaging, the launch of an e-commerce site, a new retail concept and the return to the Pitti Uomo show after a decade.

“This is year zero,” said Stefano Gaudioso Tramonte, general merchandising manager and style director. “The challenges have been hard and heavy, but the idea is to make some enhancements to the brand and blow away the dust that has collected over the last 10 years.”

Although the product maintained its high-quality standing, it was too focused on traditional tailored clothing, Tramonte believes. So he worked with the brand’s design and product development teams to not only upgrade and modernize the suit offering but to revamp its luxury sportswear as well.

“We’ve been working on research and development and technology to push our creativity,” he said. “The shape is OK — we have a lot of different fits and drops — but we’ve worked more with fabrics.”

For spring, the tailored clothing options include new pinstripes with frise effects and interrupted lines. Printed wool and silk fabrics from a printed yarn result in a different look and feel. There is stretch in the fabrics as well as the waistbands, and construction is minimal. Garments retain their shape but are softer and more pliable.

Tramonte stressed that the collection was not pushed too far into the fashion realm. “We’re not trying to follow Gucci or Prada,” he said. “We’re trying to evolve what we have, build on it, innovate and reshape it.”

The collection will continue to be targeted to a “sophisticated, classic customer,” he said, and will retain its “Italian style” but with a more-modern approach.

That’s especially evident in the sportswear.

Tramonte realizes that Corneliani is best known for its more-formal pieces. So the juggling act is to “convince the customer to buy our casualwear and gain their trust,” he said. “We have to merge the two worlds.”

Tailored clothing, which accounts for 60 to 70 percent of overall sales, remains the core of the business, but the real opportunity is in sportswear. Key pieces include bombers in the same high-twist fabrics as those used in the suits, as well as other models with an 18-gauge merino wool exterior and a nylon liner that is packable. There’s also a rubberized leather version that reverses to nylon.

Other key hybrid pieces include sport coats with chest pieces that Tramonte said are a signature of the Corneliani brand. “We’ve sold more than 120,000 pieces so far,” he said. For spring, a cashmere/linen model has a suede chest piece, and there are cotton/cashmere versions with jersey.

These hybrids can be customized and are available in made-to-measure options.

Design updates are expected to appeal to a wider audience and eventually increase the sportswear offering to a higher percentage of the overall business. “The goal is 50-50 formal to sportswear,” Tramonte said.

“We need to capture a younger customer,” added Maurizio Mantovani, chief executive officer for the Americas. “We have the ability to offer a total look that is appropriate in different situations — pieces that are fresh, unique and practical that feel comfortable and you can wear everyday.”

Growing the business — especially in America — is paramount to the team’s new direction.

“The U.S. is where we have our biggest opportunity to grow,” Tramonte said. North America accounts for a mere 9 percent of the overall business.

Even so, the brand is carried in some of the best retailers including Saks Fifth Avenue, Neiman Marcus, Bloomingdale’s and some top-end specialty stores. All told, there are some 90 points of sale in the U.S. “Retailers like the way the collection has evolved in a more contemporary way,” Mantovani said, noting that the sportswear offering is garnering the most attention. “It’s younger and more modern with understandable style,” he said.

One thing that is missing in the U.S. is a retail presence. Corneliani has four stores that are owned by the company as well as more than 90 franchised units in Europe, the Middle East and Asia. There are also 10 outlets.

In May or June, a new store will open in Rome, Tramonte said, followed by a unit in Munich by the end of the year. The company is hoping to reopen its store on New Bond Street in London. These stores will all sport a new design that will also be replicated at in-store shops, Tramonte said.

“But we need the brand to be in New York,” Mantovani said.

Having its own stores will allow Corneliani to better control its image and message, he added.

“We need to communicate in a different way,” he said, adding that the plan is to “create an experience around the brand” and make it “visually appealing and sexy.”

Cristina Cavatore, chief marketing officer, said that when creating a new brand message, the company is being careful to retain the history of the Corneliani label. “This is a refresh, not a relaunch,” she said.

So by January, customers will soon see a new label, a new CRM system, enhanced social media efforts, and a new e-commerce site full of “storytelling. “We won’t post 15 times a day, but it’ll be the voice of the brand,” she said, adding, “We’re moving from a product-driven brand to an experiential brand.”

All of these changes are a direct result of Investcorp. Although several members of the founding family remain with the company, Tramonte said Corneliani’s new majority owner has “a sharp, young team. They’re always available and ready to invest where they see opportunity.”

As a result, there’s a renewed sense of hope within the company. “There’s a new level of energy from our investors and people who have been here 20 years,” Mantovani said. “And we hope that transmits to the final consumer.”