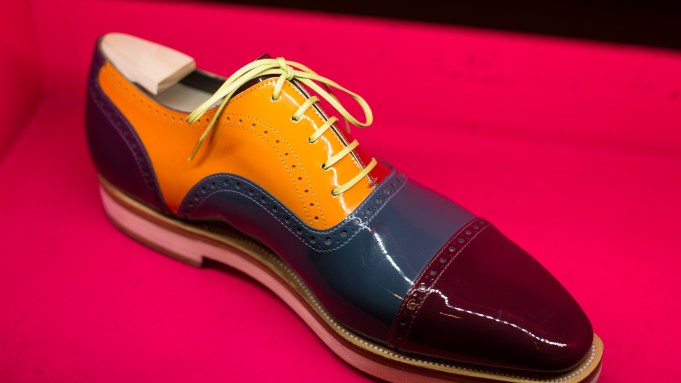 PARIS — Corthay is heading into the new year with an enlarged store network and plans to woo the African market, a largely unexplored business opportunity, according to the French luxury cobbler.

Corthay said it is launching an African-themed collection for 2016, following the opening of its first African store in Johannesburg in December 2015.

The new unit, situated at Sandton City, one of the country’s leading malls, is the shoemaker’s ninth boutique and largest store to date, boasting 1,100 square feet of retail space.

The safari-themed collection will feature hairy ponyskin derbies and exotic python laceups. A micro-fiber sole has been thought up for increased lightness and flexibility while the collection’s palette stretches a sumptuous range of browns from cognac to chocolate and coffee, and from caramel to beige.

“South Africa is the luxury market of the future, and Johannesburg itself is much better developed than Cape Town,” noted Xavier de Royère, Corthay’s chief executive officer. “The city functions as a gateway for tourists going on a safari. And we are not just talking about Australian, Chinese and American tourists, but affluent Africans for whom it’s much easier to travel to the south of the continent than to London for instance, where they are met with visa restrictions,” he said, adding that while “virtually no luxury footwear offering for men exists in that market, we like to think of ourselves as pioneers.”

Best known for its made-to-measure service, wildly colorful patinas and curvy silhouettes, the brand logged its best year yet in 2015, reporting a sales increase of “slightly above 50 percent” for the period, according to de Royère, a former LVMH Moët Hennessy Louis Vuitton executive, who would not reveal any absolute figures.

In order to keep up with growing demand, the shoemaker has invested in a new manufacturing site in 2014, while also growing its leather goods line, which now includes 24-hour bags, iPad cases and carryalls, in additions to wallets, belts and coins pockets.

The label’s bestseller remains the Arca, a two-eyelet lace-up with a demi-square-shaped toe sporting the house’s signature patina. For 2016, the brand added new ombré hues based on various shades of reds and greens and introduced two new styles: a tassel loafer and a double monk strap. The new African-themed collection, meanwhile, is available for special order, before it hits stores in May.