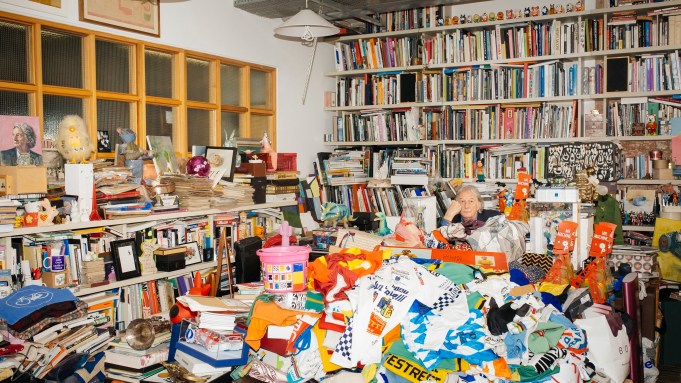 LONDON — Fifty years into the fashion business, gathering inspiration and dreaming up new collections is still second nature to Paul Smith, who remains as curious as ever, and shows no signs of fatigue from having seen — or experienced — it all.

“Getting inspired, designing has always been easy,” said Smith, sitting in one of his most treasured rooms in his design studio and headquarters in London’s Covent Garden. It doubles as a conference room and cabinet of curiosities filled with art, books, memorabilia and gifts from fans and clients.

There are shelves lined with architecture books; a vintage bicycle and piles of cycling jerseys gifted from the cyclists who won the Tour de France or the Giro d’Italia in one corner; black-and-white images signed by rock legend David Bowie in another, and Mr. Potato Head figurines sent to Smith all the way from Japan, where he enjoys superstar status.

“It might just be origami, but if someone made the effort to send you something, that’s important,” added the designer. He said he always makes a point to keep everything he is sent.

He talks as enthusiastically about his love of cycling — he was a racing cyclist from the ages of 12 to 18 and said he learned the power of teamwork through the sport — as he does about all the creative fields in which he’s involved.

He is as excited about music today as he was when he used drive from his home in Nottingham to London to attend gigs as a young man.

“Then, you could see quite important bands in small venues like a student union, or above a pub. I got to know a lot of the guys from my era, like Eric Clapton or Jimmy Page from Led Zeppelin,” the designer said.

Ever the entrepreneur, he’d sell printed T-shirts at the gigs to pay for his trips to London.

“With my character, I used to just go up and say, ‘Hello, really liked the new album.’ And unknown to them, a friend from Nottingham had taught me how to make silkscreens. So I’d buy some Fruit of the Loom T-shirts and then silkscreen a Union Jack, and have them in my bag or pocket.

It’s no surprise the brand’s relationship with the music world evolved naturally and has included a collaboration to re-release David Bowie’s 1969 album, and an exhibition and capsule with graphic designer Tom Hingston, who created album covers for the likes of Bowie, Lady Gaga and Grace Jones.

Architecture is another source of inspiration, something Smith inherited from his wife Pauline, who studied fashion design at the Royal College of Art and art history at the Slade School of Art.

“When she was doing history of art, one of her classes was on architecture and she’d always come home and talk to me about the rhythm of a building. I was thinking ‘How can buildings have a rhythm?’ It’s the most bizarre language to use.

“Then I became fascinated about it through her, really. The rhythm of a building means a repeated image of windows or of columns,” said the designer, who has turned his appreciation for architecture into one of the business’ biggest strengths.

He has a dedicated retail design department inside his multistory headquarters in Covent Garden, and each one of his stores around the world looks different. That said, they all bear the unmistakable Paul Smith stamp, with their eclectic interiors, mix of furniture and design styles, and merchandise sometimes as humble as a pencil or an eraser on display.

Smith’s ultimate inspiration — and the reason he has managed to create a brand — has got to be his clients. He is unique in that he interacts with them — and at times builds close relationships with them — on Saturdays, when he works the shop floor at his London flagship on Albemarle Street.

“The Albemarle Street shop, because of its location in Mayfair, near Browns hotel, near the Wolseley, near the Royal Academy, literally gives us access to people from everywhere around the world,” the designer said. “Within two hours you’ll meet people from Hong Kong, Los Angeles, Paris, Milan — it’s fantastic. And god, don’t we need it in this hideous world where everything’s so materialistic and false and totally motivated by the wrong things? The absurd thing with many of the brands now is that they just follow each other, and when you follow something that already exists, it’s like buying yesterday’s newspaper.”

Instead, Smith chooses to look inside his own colorful world to set the mood each season. He might be aware of macro-industry trends — like sport — becoming as important as tailoring, his brand’s biggest earner, but he isn’t one to veer far from his DNA, and still keeps things personal.

“The room might be full of inspiration, but this table, where we have our design meetings, is always clear,” he said, pointing to the large blond wood conference table in the center of the room.

“We start with a blank sheet of paper every season, and even though I have my design team with me, I always like to start them off,” said the designer.

For a recent collection, he translated images from a trip he made to Chile — where he stayed in a remote location, and was woken up by the light of the full moon – into whimsical prints that graced everything from bomber jackets, to tracksuits and ties.

In other collections, Smith has meshed images taken by his late father, an amateur photographer, in England, with his own images snapped while traveling, or drawn inspiration from the way John Craxton draws over his portraits.

“In this oversubscribed world that we live in, where there’s just too much product, no loyalty, short concentration spans, and flippancy, Paul Smith has got this wonderful loyalty from not just people my age, luckily, but from an ever-growing younger audience, who are not fooled by all the nonsense that’s going on in fashion.

“They’re interested in the fact that Paul Smith is real, and it survives because guess what? People like wearing the clothes, and we do something called selling.”