Emerging designer Daniel Fletcher works for Louis Vuitton, has his own men’s wear brand filled with political statements — and even mentored Antonio Banderas. 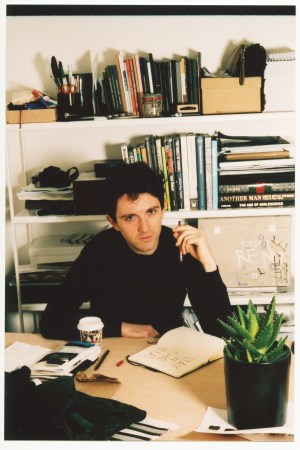 Daniel Fletcher has quite the résumé for someone who only graduated from Central Saint Martins last year.

This story first appeared in the March 9, 2016 issue of WWD. Subscribe Today.

Born and raised in Chester, England, the 25-year-old got snapped up by Kim Jones at Louis Vuitton to work on the megabrand’s men’s leather accessories in Paris. He has his own ready-to-wear collection, too, which he plans to show at London Collections: Men starting in June — but even before that, Opening Ceremony bought a capsule of key pieces from his graduate collection in January.

He has worked or interned for brands including Burberry, Victoria Beckham, James Long, Hussein Chalayan and Lanvin Homme under creative director Lucas Ossendrijver.

Fletcher describes his aesthetic as “a mixture between traditional British heritage, sportswear and street influence,” and sees his man as someone who is also looking for casual luxury. His clothing has a political bent as well, with slogans that touch on current issues.

His prices range from 145 pounds, or $205, for a ribbed long-sleeved top to 1,200 pounds, or $1,700, for a bonded leather bomber jacket. In addition to Opening Ceremony, the collection is sold on the designer’s own Web site, danielwfletcher.com.

Fletcher, who divides his time between London and Paris, sat down with WWD to talk about design, politics, working with luxury brands, and mentoring Banderas.

What led you to fashion, and what’s your earliest fashion memory?

It wasn’t until I was a little bit older that I decided to go further into fashion, so after I finished high school, I took a year and went traveling. Then I did an art foundation course at Kingston University knowing that fashion was something I was interested in. Then I realized that men’s wear was something I was interested in specifically. That’s when I went to Central Saint Martins.

What goes on in your mind when you’re designing?

I feel inspired by the things that are happening around me. Fashion and being a designer is my way of expressing myself, so if it’s something important and I feel that I want to talk about it, I’ll include it. If you look at my first collection, it was looking at gentrification and the social changes in London. That came from living in Peckham [south London], which was going through a huge period of social changes — and it still is. It was quite concerning for me, actually, the effect of gentrification in the long term — residents being pushed out. There is this real problem with rent in London and there seems to be no limit or protection. My second collection was all about youth and I was thinking about when I was growing up and how different it is to grow up in the U.K. now compared to 10 to 20 years ago. So I made this cap that had “RENT” embroidered on it.

What is your take on the state of the National Health Service and “Brexit,” Britain’s possible exit from the European Union?

In the new collection, there are some trousers that look like hospital scrubs, made in this kind of bright blue and white banding, and I embroidered “SAVE NHS” on the pocket because it’s really scary for me. I’m 25, and I’ve got a long future ahead of me, hopefully, and it’s scary that the government could sell the NHS. Even if people don’t have the same opinions as me, at least I’m raising the issue and getting people to talk about it.

With Brexit, I think that’s hugely important. When I heard the date for the referendum was June 23, I looked at the schedule, and the [men’s] shows for spring 2017 end on the 13th, and I thought that was great. I think it’s a terrible idea to leave the EU. I hope that Britain can see this. All my friends have the same opinion. It’s very scary for me. I think it’s very likely the issue will be included in the next collection — maybe there will be a “Stay in the EU” cap.

What do you consider to be your trademark?

Traditional British heritage, sportswear and street influence is where the brand comes together. Like when you take a pajama shirt and give it something different and make it not-so-perfect. For instance, with the striped pajama shirts [from his graduate collection], the stripes were drawn, so they’re not quite perfect. The bottoms have the pocket-bags on the outside, so it’s about taking something that could be quite traditional and then making it a bit awkward somehow. With the new collection, you have these school scarves with the stripes on them and they’re a short, awkward length. It’s like this idea of making something unexpected.

What sort of man are you appealing to?

It’s quite broad. There are pieces in the collection that I would wear, that my dad would wear. It is the man who is looking for something that is modern but draws from the traditional as well. It’s someone who is also looking for this casual luxury. We don’t have that much of it in the London men’s wear scene. I think we’ve got a lot of very traditional brands and that’s amazing. Then you have a lot of brands that are more street and sportswear, which is amazing as well. But there doesn’t seem to be much in the middle — something that is casual but luxurious, and that’s what I’m trying to do.

Tell us about the business side of your brand.

It is something I’m really trying to get my head around. When you’re at university, you’re doing a design course, but they don’t teach you about sales and press and since I have gone out on my own, I kind of make it up as I go. My sister Abigail has been a great help. She does textile design and she does her own thing. I can always call her up.

Tell me about your work with Lanvin.

I did a six-month men’s wear placement at Lanvin in my third year of university. It was set up by my course director. It’s a really wonderful company and Lucas [Ossendrijver] is fantastic. You get a lot of freedom. When I was graduating, I wanted to work in a company because I had such good experiences at Lanvin, and later at Louis Vuitton.

Then when the opportunity came to do my own thing, that was very exciting for me as well. I’ve taken those experiences into building my own brand.

What about Louis Vuitton?

After I spent six months at Lanvin, I went to Louis Vuitton for six months and worked on men’s bags. At Louis Vuitton, you work so closely with the design team, it is not so separate. Kim [Jones] is amazing, he gives a lot of freedom to his team. Whatever [bad things] you hear about the fashion industry, go work at Kim’s studio — it’s the complete opposite. When I graduated, they asked me to come back and do some work for them. At the moment I spend a couple of days in Paris, working for them.

What was your experience at Central Saint Martins and how did you wind up working with Antonio Banderas?

Antonio Banderas enrolled in a course after I graduated. They asked me to come back to work alongside him and give him some guidance. We’d have different people come in, such as patternmaking and technical tutors. He is a lovely guy, and we got along really well. He worked really hard as well. He did everything, so it’s not like he came along and expected people to do things for him. I’d go and ask if he needed help, and he was like “No, no!” He did everything himself.

What are your future projects or plans?

I just went to New York. I’d really like to be in some stores in London. I’m a London brand so it needs to be here. The response from America has been great. I’m in talks with some stores in Paris. In terms of what I’d like to do with the brand, I’d really like to work on some collaborations. Maybe it could even be shoes or glasses. It would be different things — something I’ve never had much experience in. If I could design, I don’t know, a pair of sneakers with Nike, that would be amazing. That’s a dream collaboration. Or even Cutler and Gross. There’s so much heritage there. The product is so beautiful and it’s all handmade. That’s a brand that I feel a kinship with. Doc Marten sponsored my fall collection footwear and I’d love to work with them and design something for them. I can get more experience in other areas and use that in my brand. The next thing is to present the new collection in June.

What do you want people to take away from your brand?

I want people to feel that it fits in this place that is luxury, but also casual. It’s not supertraditional, but it’s not supersporty either. I think it marries the two. But also, it has something to say. I’m political, you can say. That’s an important part of me and the brand. What I’m doing with my collection is talking about issues that are serious.