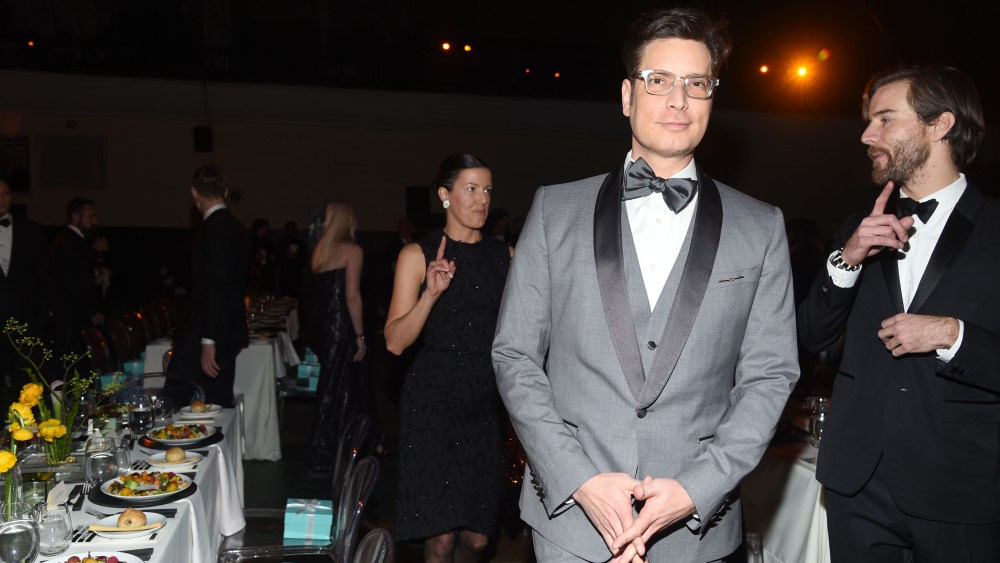 If clothes could talk, those worn by Cameron Silver would have quite the stories to tell.

The founder of Hollywood vintage retailer Decades, Silver has spent nearly four decades buying and curating his wardrobe, which contains more than 1,000 items, 300 to 400 pairs of shoes, 100 tuxedos and 100 pairs of jeans. Now he’s divesting himself of some 400 pieces from his collection of avant garde and vintage fashion.

Silver championed men’s fashion before men’s wear was fashionable. “I’ve seen how men’s fashion has become so much more socially acceptable,” he said. “For a man to have a sense of style is almost a requirement for success. I bought with the intention of looking at fashion as a way of life. I’d buy from a collection the best pieces that showed the social commentary of the times.”

Silver bought with abandon. “I acquired an obscenely large amount of clothing,” he admitted. “I doubt that there are many men’s collections that are this vast or extreme. It’s a very eclectic style.”

The sale of Silver’s cache began Monday at Decades. “In June, we’ll curate something specific for Grailed.com, a pre-owned men’s wear site selling luxury brands. The hero pieces and most avant-garde pieces will be sold in store.”

Decades’ 21st year in business and Silver’s 50th birthday looming on the horizon in 2019 got him thinking about the nature of his buying and consuming. There was also the recognition that his lifestyle and body have changed over time. “I’m not 6’3″ and 154 pounds anymore,” he said. “I’m not that regimented anymore. My personal wardrobe has changed considerably. I have an on-air show on QVC.”

His role as design director of H Halston, which is sold on the television shopping network, calls for gray suits, of which he has many. “I can’t wear a Mary Katrantzou printed suit on QVC. I kept historic pieces. Everything I wore to the Met ball, I kept,” Silver said, referring to the annual fund-raising gala for the benefit of the Metropolitan Museum of Art’s Costume Institute in Manhattan. Nor is he parting with his Jean Paul Gaultier couture.

Logistics were also a factor in Silver’s decision to divest. “I live in three cities. Los Angeles isn’t my primary residence. My collection of clothing is housed all over my L.A. house. It’s like the clothes have taken over,” said Silver, who has an apartment in Manhattan and a house in Pennsylvania near QVC. “I’ve been living without access to these clothes for two years. As far as the divorce between me and my wardrobe, I’ve had time for a nice reconciliation.”

The sale was also precipitated by a large donation Silver made in 2016 to the “Raining Men” exhibition at the Los Angeles County Museum of Art. “That — LACMA — felt amazing,” Silver said. “There was a lot more editing to be done on my collection. The last six months I started going back in and finding things that in the trajectory of my fashion lifestyle were ready to be retired. All of these things have helped liberate me from my wardrobe.”

The Hermès crocodile travel bag could sell for more than $100,000, Silver said. “The crocodile bag — I really did borrow money from parents to buy it,” he said. “I took it on two trips. One flight to New York was on a commercial airline and I couldn’t let go of it, I was so scared. The second time, I was flying privately. That bag is not for flying Southwest Airlines.”

Silver’s curatorial assistant told him, “Because the collection is yours, it has an exquisite provenance,” he said. “That would be great for my ego. The fact is that a large collection with so many hero pieces will elevate the value. We tried to price everything at fair market value.” Prices should appeal to a range of consumers, starting at $150 and topping off at $100,000-plus for the crocodile bags. “I would think museums would be interested,” Silver predicted.

“I’m sure people will buy things to flip,” Silver said. “We live in a shared economy. I started a company where we were owners, not loaners. Now we loan. In the past, fast fashion wasn’t pertinent to the conversation. This sale is a testament that owning things and building an archive has a value. Yes, we love our affordable, more disposable fashion, but we have to find a balance between owned, shared and disposable. So many young people are interested in pre-loved. Pre-loved will overtake fast fashion. It’s quality. I wanted quality and got too much quantity.”

Silver’s interest in quality has started him thinking about an e-commerce site with “a more rarified version of pre-loved luxury fashion. It’s something I’ve been talking about with a lot of venture capitalists,” he said. “I’m exploring opportunities. I think there’s something there. There are so many start-ups and established pre-loved sites. I’d like to see someone do it in the most luxurious way, so the trajectory gives a halo to the entire brand and protects the brand. It’s the hedge fund aspect of fashion. If someone would focus on the luxury…there are lots of conversations I’m having with a lot of people.”

The ultimate fashion peacock basically has no regrets about the items he’s selling, except for the never-been-worn pieces that represent a missed opportunity. “The things I never wore are the things that upset me,” he said. “It’s sort of like getting a parking ticket.”

“I had fun with all these clothes,” Silver said. “There was my [John] Galliano moment. I bought a lot from the Charlie Chaplin collection. I was obsessed with Italo Zucchelli when he did all these techno fabrics at Calvin Klein. Lee McQueen’s final men’s wear collection that I wore to Kimberly Brooks’ art opening, which I went to with Tracee Ellis Ross.”

Then there was the hot pink Jil Sander by Raf Simons suit, priced $1,775, that Silver wore in 2012 to the Dior couture show days before Simons was announced as the next creative director of Dior. “I thought no one else is going to have this suit,” he said. “Another guy at the Dior show was wearing it.”

The Paco Rabanne Entomological jacket is by far Silver’s most extreme purchase. Worn for the launch of the short-lived Bravo documentary series about Silver, “Dukes of Melrose,” the sculptural piece looks like armor. “I had to have it,” Silver said. “I thought it was an interesting historic piece. It was actually made for the opera.”

Silver’s litmus test used to be whether he could be photographed in a look. Now he asks himself, “Can I wear it on QVC? I dress more casually there.

“The excess was because I wanted the things I wanted so badly,” Silver said. “Part of the way we consume is the obsession for the unattainable. It’s the thrill of the hunt. That’s what led me into the vintage world. With modern clothing it was finding the most unusual piece.”

Silver may be associated with L.A., because that’s where Decades is located, but he insists he had a better social life in New York. “There were enough [clothes] that I never had to repeat an outfit,” he said, “but I liked to repeat. Socialites never bought styles to wear something once. I hope this encourages people in a digital world that it’s OK for a woman to wear an evening gown and restyle it for another event.”

Describing a trip to Woodbury Common Premium Outlets, Silver sounds like a reformed man. “I took the bus there from the Port Authority,” he said. “If you’re going to go, I think you need to take the bus. I brought a friend, a luxury full-price consumer, and told her we can only buy things that are 75 percent off. I bought a Dolce & Gabbana silk robe that I wore to Dolce’s April Alta Moda show in Manhattan. I also bought a Roberto Cavalli faux fur. In my age of wisdom of consuming and style, I wanted to have a faux fur. Now all my wealthy friends want me to take them on a curated trip to Woodbury Common.”

Asked about the estimated sales volume of the fashion he’s unloading, Silver said, “I don’t know the value and it’s almost like I don’t want to know.

“My whole life has been about protecting and celebrating great artists and elevating fashion to an art form,” Silver said. “My collection is testament that fashion matters and there’s value in collecting and curating.”