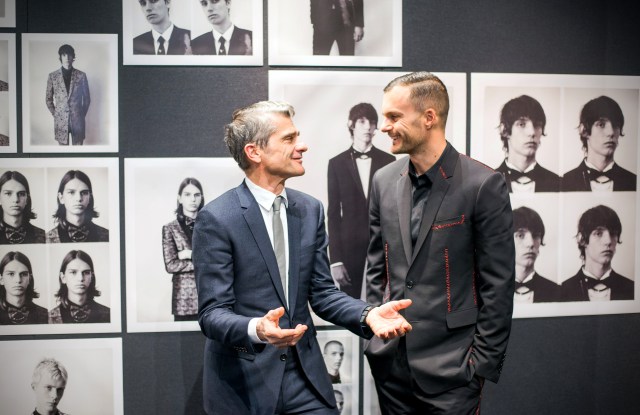 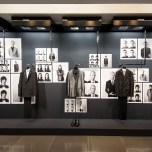 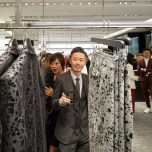 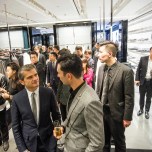 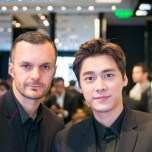 BEIJING – As a sign of the growing importance of China to Dior Homme, the brand debuted its Black Carpet collection here on Wednesday night. The capsule collection, Dior Homme creative director Kris Van Assche’s rebellious take on eveningwear, is launching this week not only in China but also globally, appearing in stores in London, Tokyo, New York and other major cities.

Van Assche, who has not visited the Chinese capital in around four years, said the decision to launch the collection here was driven by the fact that Chinese men, especially those from younger generations, are developing a taste for evening wear that breaks barriers, is more flashy and defies traditional sartorial codes.

“It is less conservative here,” Van Assche said during an interview at the Rosewood Hotel on Wednesday prior to the cocktail at Dior Homme’s store at SKP mall. “Men will go full-on fashion here, which makes sense because I would assume they are successful businessmen, whatever their business is, and they don’t just want to blend in with anyone else. They choose to stand out. I think it is less conservative here than it would be in Europe.”

Van Assche says the collection is about more extreme interpretations of traditional eveningwear for men. The collection features sequin jackets with paint splash touches applied as velvet flocking. Tuxedos are rendered in fine wool hound’s tooth or a Prince of Wales check. A scar is slashed down the satin lapel of a smoking jacket or its trouser seam to reveal white scribble embroidery. The collection also features white cotton shirts with an “ultra-creased effect” and pieces with fabric selvedge detailing.

“It has the same energy, the same rebellious attitude of the catwalk shows,” Van Assche said. “But it is applied on something as classic as eveningwear. The idea was to be as creative, to be as rebellious as possible on the cliché idea of a tuxedo, of an embroidered jacket, of an evening jacket, of a sequin jacket. I like to think of it as alternatives on classic ideas, which fits perfectly with the sartorial story of Dior.”

Dior Homme president Serge Brunschwig was relatively tight-lipped on how business is going for the brand in China. He declined to release sales figures, yet said he sees the market accelerating. Dior Homme did not suffer much on economic woes or the anti-corruption campaign that hurt many luxury players in the country, probably due to the fact the brand targets a younger clientele.

“I think we are doing very well during this period,” Brunschwig said. “Having said that, it is clear that there is this resurgence – the China market is experiencing a rebound since mid-year, and clearly we are seeing a resurgence of consumption, which is very pleasant, and clearly makes it a very dynamic and attractive market for the time being.”

The French brand has around 19 boutiques in China. Brunschwig said there’s no grand plan to open more stores, but rather openings will be assessed if it feels like the right opportunity. He also declined to discuss any plans to operate an e-commerce business here, but hinted that the brand is exploring online sales in the market.

The executive said China is “still an extremely rewarding market” as consumers here remain optimistic about the future. “They respond extremely well to new ideas, to creativity they want to try. It is rewarding for a luxury fashion brand like Dior to be in this market and to introduce this creativity,” he said. “Some other countries as you know have lost a little bit of their appetite…Clearly there is a switch going on between classic sartorial and fashion sartorial, and I think we are happy to be on the right side of what is happening.”

“I think it is a normal evolution that men go further and further and feel more free in how they dress,” he said. “It is just a natural next step.”