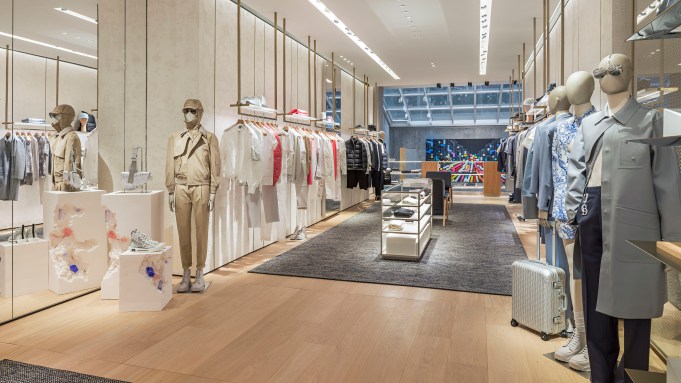 Dior Men is bowing in SoHo.

The luxury brand has opened a men’s boutique in a historic cast-iron building at 107 Greene Street in New York. It is adjacent to the women’s store and is the third men’s-only unit in Manhattan, joining others at Hudson Yards and 57th Street.

The boutique features a clean, contemporary aesthetic with light oak wood floors and off-white textured walls decorated with suede panels in Dior’s signature gray and a toile de Jouy pattern. Upon entering the store, an assortment of Dior Men’s leather goods and accessories are displayed in glass cases and on brushed metal blade shelves next to white onyx wall panels. The ready-to-wear collection is suspended from the ceiling on champagne finished rails.

To introduce the store, Dior commissioned Yoon Hyup, a New York-based artist known for his line-and-dot work, to design an abstract painting, “Sound of Friday 6,” which will serve as the focal point of the interior. The painting will hang above a staircase that descends into a VIP suite.

Dior Men has amassed a large following of late, thanks in part to the designer Kim Jones, who joined the brand in 2018. Jones, who was also creative director at Louis Vuitton and worked at Alexander McQueen, Mulberry, Dunhill, Hugo Boss and Umbro, has a goal to make Dior into the number-one men’s brand in the world.