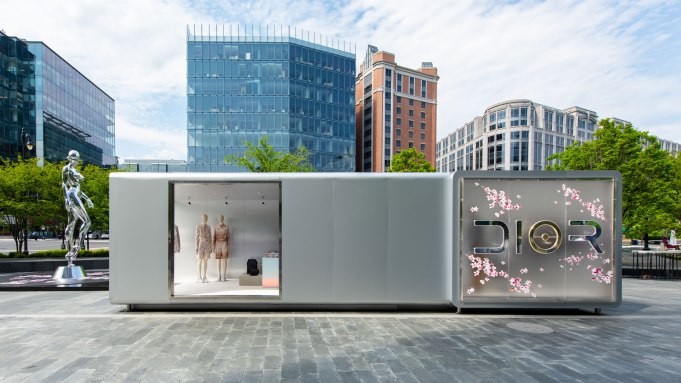 Dior Men is getting a lot of mileage out of its Hajime Sorayama sculpture.

Last November, the brand’s artistic director Kim Jones commissioned a 39-foot-tall sculpture of a robot woman by Japanese contemporary artist Sorayama to be the centerpiece for his pre-fall 2019 men’s show in Tokyo. The artist also designed a Dior logo for the season and his futuristic imagery became part of the prints used in the collection.

Now, smaller versions of the sculpture are making their way to retailers in North America, where they will be featured in a series of pop-ups this spring.

The first debuted at The Park at CityCenterDC in Washington, D.C., on Tuesday. The 16.4-foot version will remain on site through May 7.

Designed like pods, the interconnected spaces are modular and can be adapted to a number of different retail locations. Inside the metal pods are mirrors and chrome details that mimic the collection’s materials and colors. They house the full men’s ready-to-wear collection and accessories.

Renaud de Lesquen, president and chief executive officer of North America for Christian Dior, said the brand’s use of pop-ups is intended to “bring excitement and newness to new and existing clients.”

The company opened a pop-up in the Meatpacking District of New York last November to coordinate with the launch of its U.S. e-commerce site. De Lesquen said the brand has been “very happy with the results” there and that pop-up will remain through this summer.

That temporary space brought the brand into a location in Manhattan where it did not have distribution, he said. And although the Sorayama pop-ups are “different, they have the same objective. They’re intended to create surprise and reinforce the launch of the collection.”

He said this marks the first time the men’s collection will be available in Washington, which is a “very important market for men.” It’s an outside space and will be located near the women’s boutique.

CityCenterDC is also upbeat about the pop-up. According to Timothy Lowery, general manager of CityCenterDC, said the center has a flagship Christian Dior store, but this marks the first time the men’s collection will be available. “We expect to show the power of men’s wear for the D.C. market and to kick off a truly memorable experience with an iconic brand such as Dior,” he said. “The Dior robot installation should also be fun for Instagram.”

De Lesquen said the Holt Renfrew pop-up is part of the company’s “very aggressive and ambitious plans” for Canada in 2019 that will include the addition of men’s into the department store chain and the expansion of the current boutique in the Yorkdale center.

Mario Grauso, president of Holt Renfrew, said, “Dior Men will be available at Holt Renfrew Ogilvy, Yorkdale and Vancouver this summer and this is the perfect way to give our customers at Yorkdale the first look at what’s to come from the Kim Jones-designed collection in our stores across the country.”

Turning to South Coast Plaza, de Lesquen said a freestanding men’s store in that center is “doing very well,” and the pop-up in the Jewel Court will help “give a lot of visibility to the brand.”

Debra Gunn Downing, a spokeswoman for South Coast Plaza, said, “The Dior Men store has done a wonderful job of attracting customers since it opened two years ago, most recently with the Instagrammable Dior x Kaws floral installation inside the store. When Dior approached us about a pre-fall pop-up boutique featuring Hajime Soroyama’s artwork, we knew that is a natural fit for our expansive event space in Jewel Court for a number of reasons: The pop-up calls attention to the boutique, dovetails perfectly with our ongoing mission of highlighting art and creates a buzzworthy experience.”

She said large-scale pop-ups such as this “reinforce the idea that South Coast Plaza is a destination for experiences that people simply cannot get online, whether they discover these serendipitously or are invited to visit as a loyal customer of the brand. We know that this pop-up will attract a lot of attention not just from Dior followers, but also from people walking through the shopping center. More than anything else, we hope that it will inspire people to visit the Dior Men boutique to shop the collection.”

Additional pop-ups featuring the Soroyama robot will include Chengdu, China; the Landmark center in Hong Kong; the Iwataya department store in Fukuoka, Japan, and the New Bond Street store in London.