The boutique is the company's second in the U.S., but it is also planning to add units in Southampton, N.Y., and Palm Beach.

The Eleventy store is located on Greenwich Avenue.

New York City is a ghost town this summer, so what’s a brand to do? Follow the trail of its customers to the suburbs.

That’s the strategy that Eleventy took when it opened a 1,800-square-foot boutique on tony Greenwich Avenue in Greenwich, Conn., last weekend.

The affordable luxury brand founded by Marco Baldassari more than a decade ago has operated a store on Greene Street in SoHo for two years. But Geoff Schneiderman, president of Eleventy North America, said although the store has reopened, business has been nearly nonexistent.

“The doors are unlocked, but we’re seeing around 12 people a week,” he said.

So Schneiderman started to look around for another location and made the trek to Greenwich, a community Eleventy had long admired but had been out of its price range. “It was always unbelievably priced, but not anymore,” he said. “We found a great location on the main street.” A Sweetgreens café is also going to be opening nearby later this summer, which he expects to further boost traffic.

“We are very encouraged by the market in Greenwich as the area is full of people who’ve escaped New York City during — and likely beyond — the pandemic,” he said. “The town has done a great job of safely promoting shopping and dining to locals as well as many regional people taking day trips from New York City, New Jersey and elsewhere.”

The store carries the company’s full collection of men’s and women’s wear with categories ranging from shoes to tailored jackets. But while the brand does carry some formal pieces, Eleventy’s claim to fame is its sophisticated sportswear. 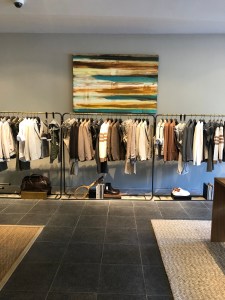 The Eleventy store in Greenwich, Conn., is the brand’s second in the U.S.

The bulk of the company’s business is through wholesale accounts such as Nordstrom and high-end specialty retailers including Stanley Korshak in Dallas, Marios in Seattle and Portland, Ore., and Richards in Greenwich. Schneiderman said he worked closely with the Richards team before opening on a “unofficial partnership” between the two.

Schneiderman said 2019 was a record year for the brand and the SoHo store had finally started to perform up to expectations. Then coronavirus brought business to a halt. But since then, Eleventy’s aesthetic has helped it recover.

In addition to Greenwich, Eleventy opened a pop-up in Fred Segal in Malibu two weeks ago, which he said is doing “incredibly well.”

Schneiderman said he is planning to add another two stores this fall in locations where customers may be working remotely or have second homes.

“I have two leases on my desk right now for Southampton and Palm Beach,” he said. He’s projecting the Long Island store to be open by September and the one in Florida by October.

The company also operates company-owned stores in Milan, Capri, Portocervo, Ischia and Cortina in Italy, and has franchised units in Istanbul and the United Arab Emirates.