The designer's spring collection was inspired by her family's circus wagons from the early 1900s.

Emily Bode in her studio in Chinatown, New York.

NEW YORK — Walking into Emily Adams Bode’s Chinatown studio is a little like visiting grandma’s attic. The cramped space in the walk-up building on East Broadway is chock full of antique quilts, tobacco labels, horse ribbons and a hodgepodge of other early American artifacts that provide the first glimpse into the heritage-skewed men’s wear that has put the young designer on the map.

And how. Bode’s brand might be only three years old, but she already has received more accolades than designers who have been around for decades.

She was the first female designer to show at New York Fashion Week: Men’s and was the runner-up for the CFDA/Vogue Fashion Fund Award. Earlier this month, she snagged the Emerging Designer of the Year Award at the CFDA Awards at the Brooklyn Museum. And, oh yes, she’s been shortlisted for the LVMH Prize, one of the biggest awards in fashion for a young designer.

The LVMH Prize is one of the reasons Bode is also making another bold move with her relatively young label — she’s decamping from New York — to join the already packed Paris schedule.

She may be heading to the French capital to show, but it’s her American roots that drive her, and her brand. Born and raised in Atlanta, Bode has been a lifelong lover of everything vintage Americana and turned that admiration into design at The New School, where she completed a dual degree with a BFA from Parsons in men’s wear design and a BA from Eugene Lang in philosophy.

After working in the design studios of Marc Jacobs and Ralph Lauren, she created her own label in July 2016, offering up modern workwear silhouettes embellished through quilting, mending and appliqué techniques.

Her spring 2020 collection, which will be shown on June 18, will draw on her family’s history as wagonmakers for the circus in the early 1900s. “A huge part of my childhood was going to the circus,” she said. “So I started focusing more on that time period.” 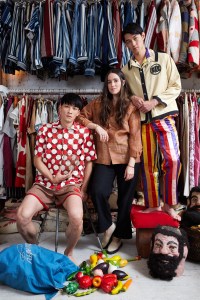 Emily Bode with looks from her new collection.  Masato Onoda/WWD

She related that the Bode Wagon Co. received a commission in the early part of the century to build wagons for the Barnum & Bailey Circus. To dive further into that history, the designer visited the Ringling Museum of Art in Sarasota, Fla., and met there with the archivist, who regaled her with stories about how the wagons were sent to Florida for the winter, including one elephant wagon that was stored on the beach and had people living in it.

Bode will use that inspiration to create her trademark workwear silhouettes in a colorful palette inspired by the circus. Trousers and shirts, for example, will incorporate appliqués and vintage horse ribbons, and there will be “a lot of homemade items and beautiful scenes” woven through the line, she said.

For this, and all her collections, Bode uses repurposed fabrics, which she said are the “foundation of the brand.”

“History grounds you,” the designer said, adding that she prefers to look back rather than forward “especially in this chaotic sphere.”

Since winning the CFDA award, Bode said she’s been “stepping back” and exploring just how she got to this point. “It was pretty crazy,” she said of the award. “It’s the equivalent of the Oscars for fashion. In college, we waited for the awards every year, so this was a huge honor.”

Since then, she’s received a lot more calls from high-powered fashion executives and other designers offering congratulations and advice. “To even be on their radar is amazing,” she said.

Bode added: “I launched the brand out of my apartment and now I’m looking at how the company is structured and our business model, how it brought us to this trajectory and how to get to the next step.”

She recently made some “senior level hires,” including Jack Miner, formerly of Hecho, who is overseeing operations and finance. She’s also in search of someone to focus on production.

“Our distribution and revenue have been doubling season by season,” Miner said.

There are now seven full-time employees and a rotating group of freelancers and interns. At any one time, Bode said, there can be upwards of 12 people jammed into the tiny Chinatown studio. 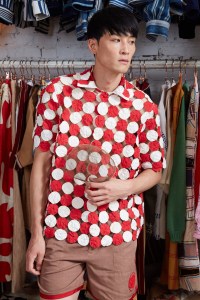 Since the brand’s launch, the business has grown significantly. Around 50 retailers carry the line, half of which are overseas, including Browns, Matchesfashion.com, Ssense and Mr Porter. The strength of her European distribution is another reason she’s decided to show in Paris this season.

In the U.S., her stockists include Barneys New York, Bergdorf Goodman, Opening Ceremony, Dover Street Market and The Webster.

Bode attributed her success to the collection’s “different take on men’s wear” and its “focus on domestic textiles and history. That comes through in the embroidery and trim. And our boxy and boyish silhouette sets us apart.”

She said in the early 1900s, the typical person spent around 30 percent of their income on clothing. Now it’s around 3 percent, a phenomenon that is reflective of how people relate to their garments. Bode hopes to play a small part in changing that. “We’re now seeing a reversal of fast fashion and people investing in their wardrobes again,” she said, adding that she seeks to design the “kind of items that people have a strong emotive response to.”

Although her creative skills are now well-established, Bode is just as involved in the business end of the brand.

Miner said: “She’s so creative and talented, but she also has business savvy — she’s the ideal founder because she understands all the facets of the business.”

Bode has had several mentors over the course of her career, including former Barneys executive and now fashion consultant Julie Gilhart, as well as CFDA chief executive officer Steven Kolb and designer Natalie Chanin.

In addition, she cherishes the time she interned at Ralph Lauren, where she was fascinated by the elaborately designed rooms that are created for each line every season. “It was so very detail-oriented,” she said. “There was a huge reference in vintage and those references were always on point.”

At Marc Jacobs, she learned the importance of special projects and creating items that complement the collection, she said, a path she will undoubtedly go down one day.

But for now, she’s concentrating on designing the best men’s wear possible. Although women do buy her men’s wear in smaller sizes, expanding into women’s wear is “not at the forefront of what we want to do,” she said.

She’s also not married to social media — although she did post about her engagement recently on the occasion of her 30th birthday. In fact, Bode was hard-pressed to say just how many followers she has on Instagram. “Let me see…60,000?” She said that 90 percent of her traffic from the web comes from Instagram but the team hasn’t created content specifically for that medium in the past.

She also hasn’t collaborated with any big fashion names yet. Her only partnerships have been with artist friends and the furniture designers behind Green River Project — and her now-fiancé Aaron Aujla —  a no-brainer since her collection “lends itself to home,” she said.

So where does she see herself and her brand in the future, especially as she starts to gain recognition from big companies such as LVMH Moët Hennessy Louis Vuitton?

“It’s important for Bode to stay independent right now,” she said. “We’re just figuring out our system and what sets us apart from other brands.”