The Italian men's wear company is launching a new campaign that challenges traditional views of masculinity.

An image of Mahershala Ali in the campaign.

MILAN — Gildo Zegna, chief executive officer of the Italian men’s wear powerhouse Ermenegildo Zegna, is known for being a private man, but he’s decided to take a stance to launch a new communication campaign that will be officially presented in New York on Sept. 5.

Under the hashtag Whatmakesaman, Zegna’s new campaign is actually much more than simply this season’s latest ads: It maps out a new path for the group, which is reaching out to its customers — established and new — to discuss the concept of masculinity. Gildo Zegna appears in a short film discussing the manifesto.

“I believe in this new form of dialogue and direct conversation with our customers through social media, which starts from asking questions, as we do not offer clear-cut answers,” said the executive in an interview in his office here.

“What makes a man? There isn’t a single answer to this question, as the world and the concept of masculinity continue to change in a fluid way. Asking questions is the best way to start a conversation. How much do men talk of love or failure? They tend to speak of sports, success, cars, watches, art, travels, business and discipline,” he contended.

Things are changing, Zegna believes, and so are the company and its image. “We are now showing a softer part,” he said.

To further deliver the message, the company tapped Academy Award winner Mahershala Ali, who attended the Zegna show in June, and singer and actor Nicholas Tse to front the campaign, which is peppered with questions and asserts love, failure, dreaming, playfulness, or freedom, for example — all qualities seen as making a man today. 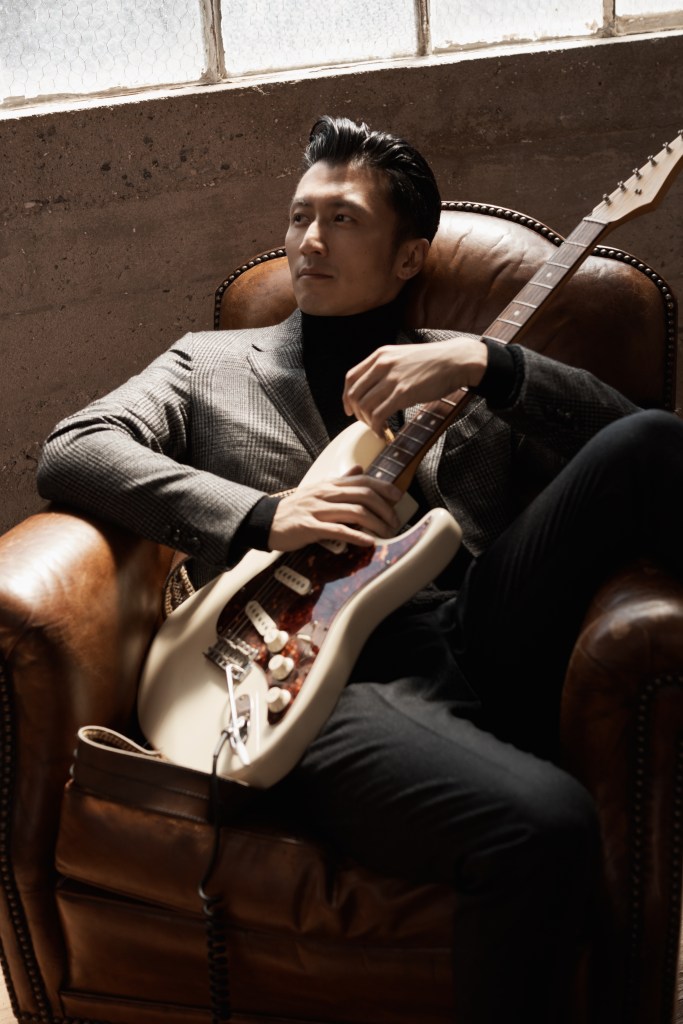 An image of Nicholas Tse in the campaign  courtesy image

Zegna does not want to impose the group’s own reading or truth. “After all, there is not a single definition. As we stated in the campaign’s manifesto, ‘Being a man is not a single thing, and it is not defined by pre-established rules.’ The definition of masculinity in which men have to be strong without showing any weakness no longer exists.”

The manifesto reflects upon the perception of masculinity today as men today “learn to confront their own weakness and are willing to take risks in affirming their identity, whatever it may be. It wants to defy stereotypes,” Zegna continued. 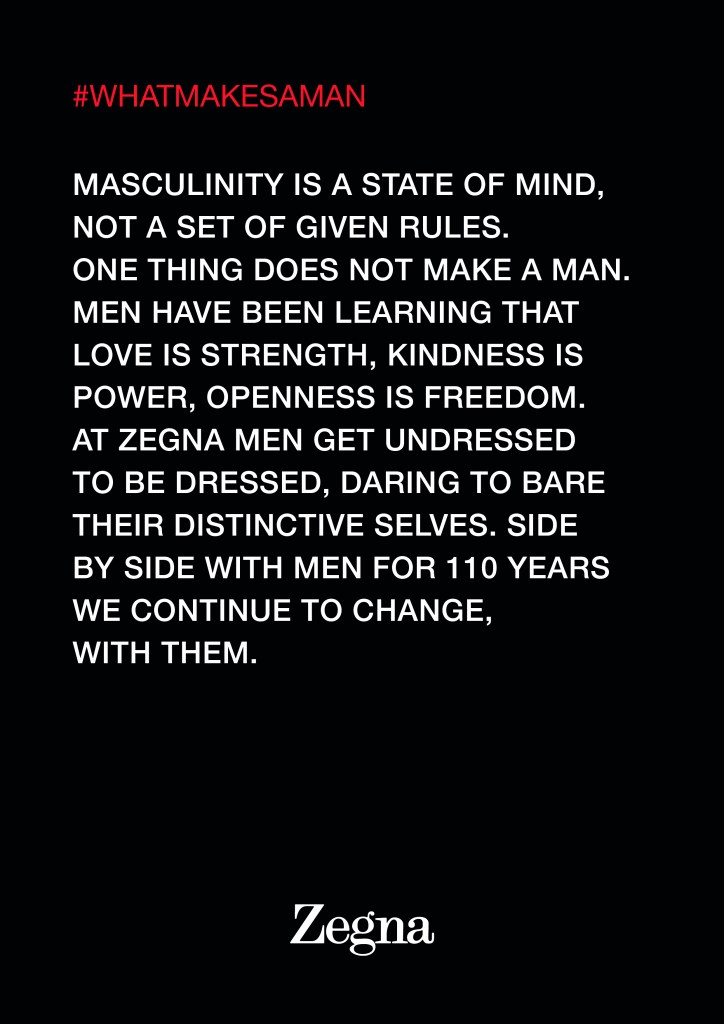 The company will mark 110 years in business next year and Zegna believes this contributes to a certain legitimacy in engaging in discussions on masculinity — a development of the “Defining Moments” campaign launched in 2017 with Robert De Niro and McCaul Lombardi, which was also heavily digital and aimed at starting conversations with customers. This consistency is key for Zegna, although he underscored that the company is now showing “a new side.”

“Starting with myself, opening up more to show a softer side. I started this exercise within the company, which has led to increased teamwork and a more relaxed atmosphere. Less push and more pull,” he said.

This positive reaction led to the idea of opening up to customers, too — a concept that was very much embraced by the members of the fourth Zegna generation. The executive’s son, Edoardo, who was appointed head of content and innovation and omnichannel at the group in 2014, urged his father to front the short film as a representative of the brand.

“I don’t really like to expose myself, but I felt it was time to take a stance and personally commit, and I believe in this new form of dialogue. Through socials, we can reach out to a potential new crowd, and this challenges us to create a more intimate and transparent conversation,” said Zegna.

The digital world helped Zegna “understand we were missing something. It’s hard to do storytelling and to communicate a true message. We realized there sometimes was a difference between what we felt and how we were perceived.”

Obviously, Asians and Millennials are “part of the equation,” he said, as the company works on rejuvenating its image. Zegna also credited artistic director Alessandro Sartori for setting new standards and opening up the company to this fluidity.

“It’s a new way to work as a brand and as a company, with an approach from the bottom up and not top down. We have been understated in not showing our true story, but this offers a chance to say what Zegna really is.

“We want to show that we are flexible, open and keen to get feedback, whether it’s positive or not,” he added.

Initially teased on social media starting Aug. 28, the campaign, which will also appear in traditional channels such as billboards, taxis and print starting Sept. 5, has so far received “constructive and interesting reaction,” said Zegna. While declining to provide the financial investment in communication, he conceded that the company is increasing its digital presence. “We spend in a more careful and qualitative way. The media mix has changed, inflation is in the air and we make better use of our budgets,” he said.

To further strengthen the brand’s consistency, this new approach is reflected in the product or in the new uniforms in the stores, which Zegna noted are less classic and more personalized, with no ties and softer suits, as well as in an evolution of the store concepts in London, New York (a new unit opened earlier this year in the Crown Building) and Dubai, for example. A new store will open in Paris next fall, moving from Rue du Faubourg Saint-Honoré to Avenue George V.

The presentation in New York is only the first stage of a global launch that will touch cities such as Singapore, Tokyo, London, Paris and Milan. But Zegna underscored the relevance of the American market — which the brand first entered in 1938 — and his desire to further develop and strengthen it.

Zegna will work with other talents, including Alexis Ohanian, Serena Williams’ husband, who reflects “this openness beyond traditional values,” said the ceo.

The group is also inviting women to join the conversation. “I’m very much convinced that their point of view and sensitivity can stimulate the debate and help us explore the definition of modern masculinity through its many meanings,” he said.