This is the first time that a woman appears in the luxury men's wear brand advertising campaign.

MILAN — What does it mean to be a man today?

That’s the question that Ermenegildo Zegna wants to answer with its #WhatMakesAMan advertising campaign series, which officially debuted in September 2019 featuring “Green Book” actor Mahershala Ali and singer and actor Nicholas Tse. The campaign was launched in New York, where the brand rented a private Upper East Side townhouse to host a conversation between Ali and Ermenegildo Zegna artistic director Alessandro Sartori.

For the latest iteration of the series, the Italian luxury brand is evolving the concept by tapping for spring 2021 a special mother-and-son duo: French actress and singer Isabelle Adjani and model, singer and songwriter Gabriel-Kane Day-Lewis, whose father is Academy Award winner Daniel Day-Lewis. This is the first time that a woman has appeared in a campaign for the Zegna brand, which last January included female models in its digital project presenting the fall 2021 collection.

“Sometimes my son sounds like he has an old soul,” said Adjani, discussing how she sees her son. “Behind the boy that’s sometimes rebellious and really stubborn, there is so much wisdom and beautiful philosophy about love and kindness and generosity.”

Day-Lewis and Adjani were lensed in the natural landscape of the Oasi Zegna, a 24,710-acre natural reserve surrounding the Zegna wool mill in Italy’s Piedmont region that includes hydrangeas and rhododendrons as well as half-a-million pine trees planted by the namesake founder starting in the ‘30s.

“I had such an amazing experience working with Mom. This is the first campaign we ever shot together, and during the video segments we both got into these characters that we created on set and it almost felt like I was getting to act with her. Prior to the shoot I actually hadn’t seen her in over a year so we had such a lovely time catching up in person and getting to spend some time together. I’d definitely consider myself a mama’s boy,” Day-Lewis told WWD. He also poses alone in other pictures, sporting not only modern suits but also the brand’s new range of luxury leisurewear styles, including chic yet comfortable hybrid garments. 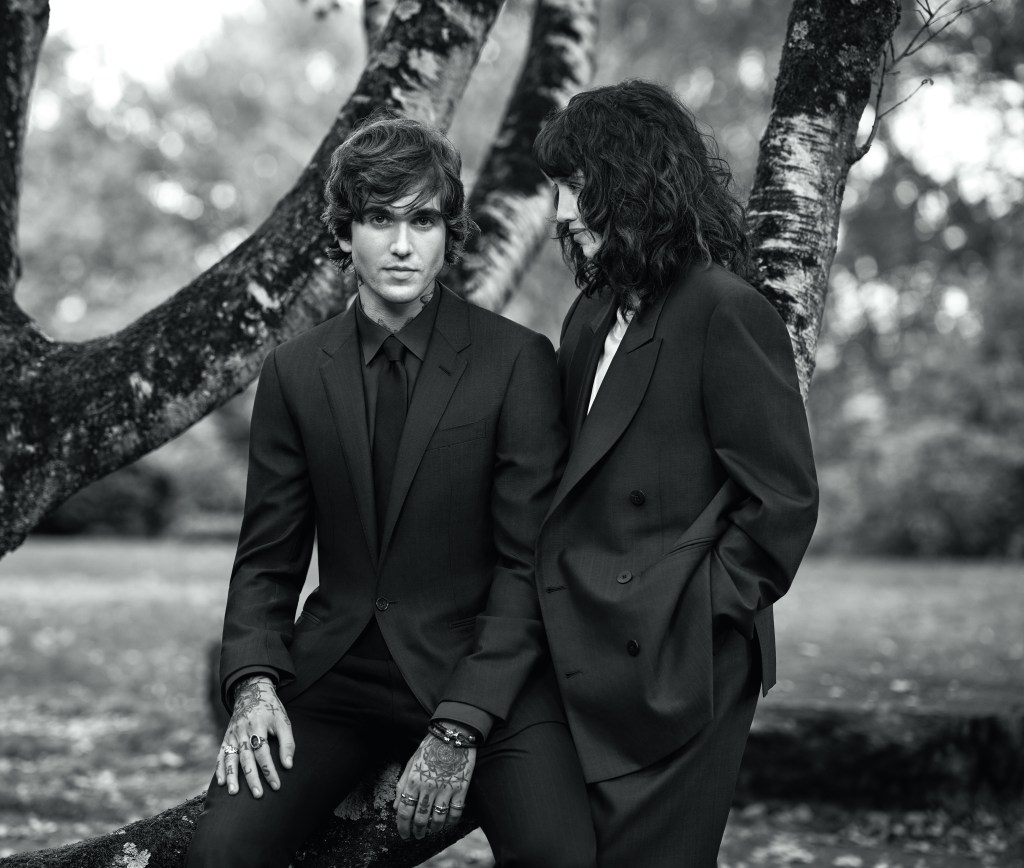 Asked about what it means for him to be a man today, Day-Lewis said it “is about supporting others. Being mindful and kind to the people around us, learning how to allow ourselves to be vulnerable and in touch with our emotions while learning how to shed the preconceived societal notions that have led men to believe that toxic masculinity and machismo are to be expected from men. Being kind, loving and spreading positivity is the new manly.”

The artist, who in 2016 posed for French label Zadig & Voltaire, said that growing up he also matured a new desire for simplicity when it comes to fashion choices. “I’ve toned my style down a lot over the years. I used to wear a lot of flashy stuff and experiment with avant-garde clothing but nowadays I like to keep it simple,” he said. “A fitted T-shirt, some jeans, sneakers and some silver jewelry are all I need. I do love to get dressed up and wear a nice suit when the occasion calls for it, though.”

Day-Lewis is going to release a few new songs over the next few months. “One of them is a feature with my good friend and one of my favorite U.K. pop singers Pixie Lott. We wrote this song together in Paris a few years back and finally decided to put it out into the world. I’m really excited about this collaboration with her,” he said.