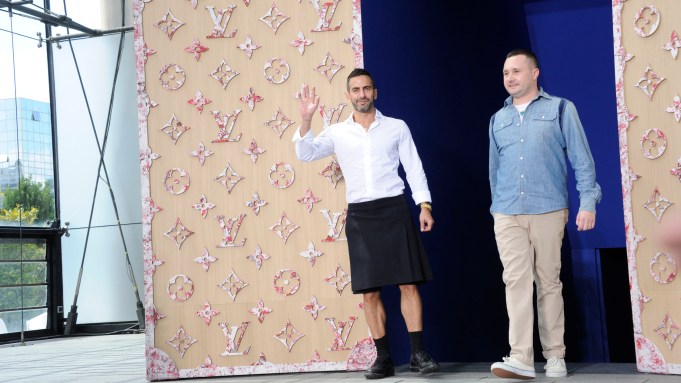 PARIS — Kim Jones is to exit Louis Vuitton after showing his fall 2018 collection for the brand in Paris on Thursday, WWD has learned.

Jones has been men’s artistic director of LVMH Moët Hennessy Louis Vuitton’s flagship brand since 2011, parlaying his zest for exotic travel into ultraluxurious collections with understated cool and sly functionality.

“It has been a huge privilege to work with Kim,” said Michael Burke, Vuitton’s chairman and chief executive officer, lauding the designer’s “ability to set trends” along with his talent and determination. “All of us who have been fortunate to work with Kim wish him continued success in his next venture.”

Vuitton has yet to reveal its succession plan for the plum post, which has gained visibility thanks to Vuitton’s mighty show and campaign budgets, Jones’ clutch of celebrity friends and the brand’s high-profile collaborations with the likes of Supreme and British artists Jake and Dinos Chapman. Vuitton described Jones as “the driving force behind some of the Maison’s most successful projects and collaborations.”

In an Instagram post, Jones thanked his team and collaborators. “Thank you @louisvuitton for 7 wonderful years ! You really have been the best and I am grateful to @themarcjacobs for giving me the opportunity to be here in the first place ! I also want to thank Michael Burke for being so great and believing in me and Delphine Arnault for her support,” he wrote.

The development is sure to further fuel speculation that Jones is readying himself for a new design challenge — and could potentially trigger a round of musical chairs in men’s wear, which has not endured as much studio turmoil as women’s wear of late.

WWD was the first to report on Sept. 18 that Versace has held discussions to bring Jones on board, but a deal has yet to surface and the Italian fashion company has never confirmed the speculation.

His name has also been floated as a contender for Burberry, which is seeking a successor to Christopher Bailey, who is to bid farewell to the British brand at the end of March.

A globe-trotter extraordinaire with a passion for wildlife, Jones has no design experience in women’s wear or couture, but has had a storied fashion career, with John Galliano snapping up his graduate collection from Central Saint Martins.

His own men’s wear label, known for its sporty, streetwear edge, lasted for eight seasons and attracted the attention of Dunhill, where he was creative director from 2008 to 2011. Jones is seen as one of a small clutch of marquee designers who can straddle the luxury and streetwear worlds, which is why Versace might have come knocking.

His final show is sure to be a poignant and electric moment during Men’s Fashion Week in Paris, which gets under way in earnest Wednesday.

Jones was named British men’s wear designer of the year in 2006 and his résumé includes stints at Alexander McQueen, Mulberry, Hugo Boss and Umbro.