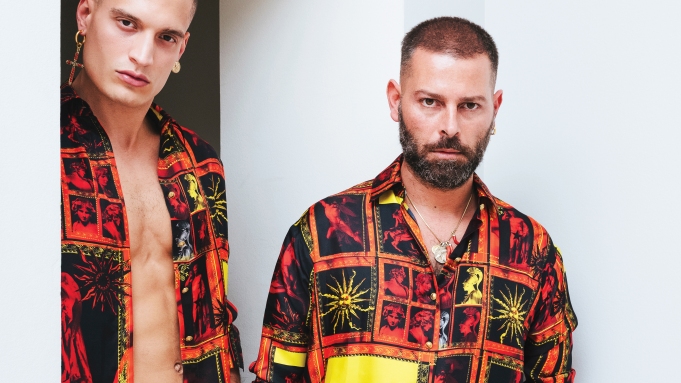 “The message is very strong, almost borderline. I don’t like what is just safe,” said Fausto Puglisi describing his first men’s capsule collection, to be unveiled at Florence’s Stazione Leopolda on June 15.

This bold statement is in character for those familiar with the Sicilian designer’s women’s wear, which since its launch in 2010 has been focused on a flamboyant and maximalist approach to fashion.

“There are so many men around the world, especially in London, the United States and Asia, who buy oversize pieces from my women’s collections, including biker jackets and sweatshirts,” Puglisi said. “Retailers have started asking me to re-fit them to make them masculine and so in the last year and a half I started considering the idea of launching the men’s line.”

At Pitti Uomo, Puglisi will offer a taste of his new men’s venture, which will officially launch with a full lineup in January.

“I wanted to start with a capsule because I’m totally involved in every aspect, from creation to production, so I decided to focus on key pieces,” said Puglisi, listing biker jackets, bomber jackets, sweatshirts, tailored suits, shirts and knitwear among the pieces in the capsule to be presented with the women’s resort range.

Described by the designer as “coherent with the image of the established image of the brand — and bold,” the capsule is influenced by a certain Mediterranean street attitude.

“Think about Naples, its sense of freedom, the real men in the street who don’t care too much about their look but have a super strong attitude,” said Puglisi, who pointed to Antonio Benitez, the character played by Antonio Banderas in Pedro Almodóvar’s “Law of Desire.”

With the classical Ancient Greek men’s body shape in mind, Puglisi kept the shoulders wide and the waist tight with breezy shirts and pants cut in a skinny or wider fit with pleats.

In keeping with the brand’s tradition, the pieces will be decorated with appliqués and printed patterns. “The overall look will be neither too classic nor too street,” he said.

The men’s collectionand women’s resort will be the first fruits of the new licensing agreement Puglisi signed with Italian manufacturing company Factory Srl, which succeeds Gilmar in the production of the brand’s lineups.

It’s been a big year for Lucio Vanotti. In January, the designer was chosen by Giorgio Armani to show at his Armani Theater, and now he has been selected by Pitti Immagine to take part to the Pitti Italics program at Pitti Uomo.

“I started thinking that I would have liked to present during Pitti Uomo right after the runway show at the Armani theater,” Vanotti said. “Pitti is something very Italian, but extremely international at the same time and it’s so great that my dream came true.”

The designer will hold a men’s and women’s runway show at the Dogana venue, a stone’s throw from Pitti Uomo’s Fortezza da Basso, on June 16.

“The idea for the show’s set is to re-create the familiar atmosphere of a Medici villa with live music,” said Vanotti, who highlighted the impact of Florence on the creation of the collection. “I usually let the place where I show influence me and Florence gave me the opportunity to be inspired by certain Renaissance atmospheres, which emerged especially in the color palette.”

The colors pay homage to Masaccio paintings and run the gamut from more subdued tones of beige, blue and white to earth hues, pink and aqua green.

Rooted in a minimal aesthetic, the collection features flared outerwear pieces, including a cape with an incorporated vest and a trench with extra volume on the back; heavy viscose blazers in a houndstooth pattern; poplin and viscose shirts, as well as cotton and viscose knits. Pants, made from a range of fabrics such as super soft denim, are very fitted but Vanotti also developed more relaxed silhouettes with wide legs and elastic bands at the waist. An accessories collaboration with Marsell completes the collection.