Catching up with the Zegna ceo. 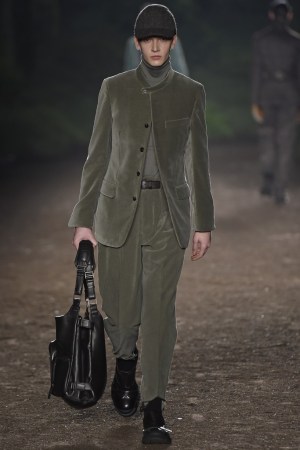 In September 2012, Gildo Zegna, chief executive officer of the Ermenegildo Zegna Group, felt it was time to “add a twist of fashion” to the company, known for its quality fabrics and style, therefore also eyeing new consumers in emerging markets. To this end, Zegna tapped Stefano Pilati, formerly at Yves Saint Laurent, to start in January 2013 as creative director of Agnona, and head of design at Ermenegildo Zegna. Pilati was given responsibility for that brand’s fashion shows as well as for the Ermenegildo Zegna Couture collection, the latter built on sartorial, hand-stitched suits in luxury fabrics. Two years into the new course for the brand, Zegna discusses the evolution of the business.

WWD: As the men’s shows are about to begin in Milan, do you think it’s a particular moment of buzz for the city and men’s wear fashion in general?

Gildo Zegna: Yes. Both men’s and women’s fashion weeks are always a time of excitement for the city thanks to the strong international presence. This year in particular, there’s the added enthusiasm that Milan Expo is bringing. It’s very positive for the city, both in terms of projects and initiatives, and the increased presence of tourists from around the world. Our Italian retail performance has improved since the start of the Expo. It is also a very special time for the evolution of men’s fashion in that men are willing to try more and enjoy shopping more than before.

WWD: How has the relationship with Stefano Pilati evolved since his arrival and what has he brought to the group and to the collections?

G.Z.: The relationship has evolved well: We have got to know each other better and appreciate our respective roles. The signing of Stefano Pilati has given a more fashionable edge to our collections, helping us to attract a new type of consumer, interested in style-consciousness, with the sense for modern elegance, that demands high quality products and exclusive fabrics. Zegna Couture has engaged these customers to a meaningful dialogue with the brand.

G.Z.: Together with Stefano we have created the concept of the New Leadership, which is a powerful image and direction we are developing throughout various activities. For fall, we are working on a new project for Japan for which Stefano has opened the discourse to a new generation of style conscious, successful, charismatic and inspiring personalities. It is an evolution of the New Leadership concept, introduced one year ago by the film “A Rose Reborn,” which highlighted a new masculine elegance and aesthetic, expressed by the Broken Suit concept.

WWD: What are the trends that he has started that have been most successful commercially or in terms of visibility?

G.Z.: Ermenegildo Zegna Couture is designed and created by Stefano, for a Zegna client that did not exist before now. It’s a niche collection with distribution limited to the top Zegna worldwide boutiques to guarantee exclusivity. In terms of visibility, this project represents a turning point for the brand offering the opportunity to present a meaningful proposition to fashion conscious customers. Successful items worth mentioning are the Broken Suit and the couture sneakers that have become icons of the couture collection.

WWD: The latest Bain & Co. and Fondazione Altagamma study sees a slowdown in men’s wear, mainly determined by lower growth in Asia, Macau and Hong Kong in particular. As you commented in the 2014 financial results for the group, which saw sales decrease 4.7 percent to 1.21 billion euros, or $1.6 billion, you underscored the contraction in China and Russia. Do you already see changes in the performance of these areas? How are you tackling these issues?

G.Z.: The contraction in China and Russia is a fact that has affected our business. I won’t predict or hypothesize how things may evolve because, in recent years, I’ve seen sudden and unplanned changes that required us — like other luxury brands — to review our medium- and long-term strategy. The slowdown in the Russian and Chinese markets, including Hong Kong and Macau, persists and the important flow of Russian tourists has slowed down a lot in particular in Italy.

The Zegna Group, fortunately, is present in about 100 countries worldwide. We are working to strengthen our position in mature markets such as the United States, Korea, Japan and Australia where we have been present for some time, and to further develop our presence in Africa. We already have a retail presence in Egypt, Morocco and Nigeria, and a few weeks ago opened a new store in Johannesburg, South Africa. The next Zegna boutique will be in Angola.

Our presence in Latin America remains firm with recent openings in Panama and Santiago, Chile. Mexico and Brazil show a positive trend.

WWD: Which markets at the moment offer most potential to the group? What steps are you taking? Are you investing in the expansion of your retail network or are you concentrating on the existing ones?

G.Z.: The strategy is two-fold. On one hand, we are strengthening our network of existing stores to increase their performance; on the other hand, we are evaluating new opportunities. We have recently opened a global store in Ginza, Tokyo, and Melbourne, Australia. In the U.S.A., we opened in Miami’s Design District and will be present in New York’s Brookfield Place next November. A major project is scheduled in London at the end of 2016.

WWD: How would you define the performance of the wholesale channel now?

G.Z.: Positive. Overall, Zegna is two-thirds retail and one-third wholesale if we look at worldwide sales; 50-50 in the United States.

We’re planning to stay the same, as the performance at a wholesale level is quite satisfying and we entertain a splendid partnership with top North American retailers.

WWD: Is Italy showing signs of a pickup?

G.Z.: A gradual improvement led by a weak euro that together with the Milan Expo is bringing lots of visitors from all over the world.

WWD: Earlier this year, you referred to the completion of the reorganization of production that began in 2013. Could you please provide additional details?

G.Z.: Last year we made a significant investment in Novara, Italy, to strengthen the control of our industrial clothing chain that led to a plant consolidation this year.

WWD: The companies that remain private and owned by families are increasingly fewer. How does the Zegna family continue this way? Are you evaluating an initial public offering? You once approached Valentino, are you still mulling the idea of forming a group?

G.Z.: We remain private and family controlled. We do not contemplate any IPO. We remain totally focused on our brand.

G.Z.: The pricing policy will remain stable with minor adjustments for impulse buying products. Undoubtedly, the strengthening of the dollar will be beneficial given that 90 percent of our business is based on exports.

WWD: How is the digital development evolving for the group?

G.Z.: It is finally moving ahead. We are developing an omnichannel program that has started in a test country, and will be introduced gradually at a worldwide level with an emphasis on providing innovative services to our customers. Our digital marketing investment is gaining share.