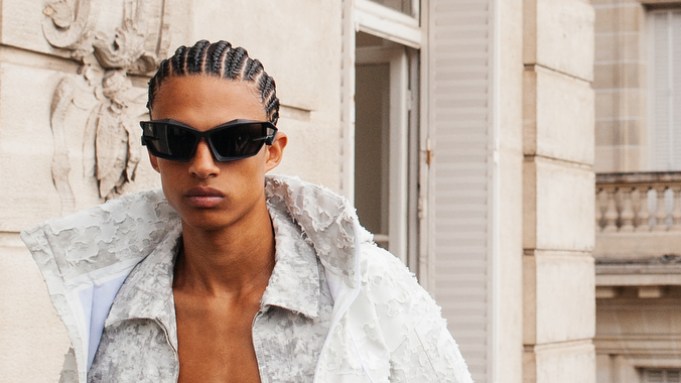 Marie Kondo’s advice for decluttering didn’t help Matthew Williams very much when it came to thinning out his epic collection of T-shirts, for so many of them still sparked joy when he held them in his hands.

Lately he’s been partial to plain black ones that are slightly sun-bleached.

“When I wear something that’s quite new, I like the tension of adding something that’s old. It makes it feel real,” he said in an interview. “I think that’s why I’m so into garment dyeing and treatments in the collections, because it gives the clothing a soul, that feeling they’ve been touched by hand, lived-in. I’m always kind of drawn to that.”

Williams was discussing the Givenchy men’s show for spring 2023 on Wednesday in Paris, his first dedicated menswear display for the French brand, and — it dawned on him during the interview — probably his first men’s-focused runway.

One of the most anticipated shows of men’s fashion week in Paris, which runs through Sunday, Givenchy is among the leading European brands uncoupling from coed shows to give menswear a bigger spotlight.

To wit: Williams, in another first, will let the sun light up his afternoon, outdoor display at École Militaire, a complex of grandiose 18th-century buildings not far from the Eiffel Tower. He hinted that the collection will explore “the concept of summer layering” and that his mood board includes “loads of images of people covering themselves from sunlight.” (A California native, he’s more of a sunscreen type.)

“It’s nice to give the men’s and women’s space, and each their own platform to tell a story,” the designer said, dialing in from Milan, where he was readying his eponymous brand 1017 Alyx 9SM, for the runway. “There’s just more range with more looks.”

Since arriving at Givenchy in June 2020, in the midst of the coronavirus pandemic, Williams has unveiled collections in showroom presentations, two filmed runway displays, and two live shows, all coed.

Wednesday’s outing will allow him to better articulate his view on menswear, which comes from a personal place, based on his fascination with garment construction and finishing, and his instincts about what looks cool and modern.

The American designer winces a bit when questioned about inspiration and references or brand codes, given that founder Hubert de Givenchy designed only for women.

“My design language is consistently building on the same mood, especially with the menswear. It’s about exploring with material research and forms,” he said, describing a process of taking “archetypes” in menswear and pushing them, via treatments, fabric developments and silhouettes, “to another place.”

For example, Williams applied his enthusiasm for hardware by incorporating a padlock closure for tailored jackets, which have been worn by such famous men as Elon Musk, Lewis Hamilton, Jack Harlow and Darren Criss. He’s also added airbrushed street art, a painstaking process, to hoodies, jeans and backpacks.

Williams is certainly pushing boundaries below the ankle, creating sculptural footwear with cutting-edge manufacturing techniques that help define the silhouette and attitude of his fashions.

“There are some exciting shoes we’ve been creating that I’m excited to show the world,” he said, mentioning a rain boot realized with vulcanized rubber, a process that pressure-seals the shape.

“It creates a really unique silhouette and construction. There’s only a couple places in the world where you can make a boot like this, and it’s taken a long time for us to create,” he said. “I like exploring forms in the footwear.”

He’s indifferent to debates about streetwear versus more formal, dressy menswear because he tackles the whole wardrobe, especially at Givenchy.

“For a full show context, I’m really into mixing, and also presenting the reality of menswear, how I see the pieces mixed and worn,” he explained. “I always talk about how I’m designing for myself, how I would dress. I really like to try on all the samples, wear the clothes and see if that’s something that feels really authentic to me and authentic to now.”

While he said there may not be any formal shoes treading the Givenchy runway, the house makes them — as it does sneakers — alongside more unconventional footwear designs.

Willams keeps an archive of clothing in Milan, including sentimental pieces like childhood football jerseys, choice pieces from his Givenchy years, his Alyx brand, and earlier fashion projects like Been Trill, a men’s streetwear brand cofounded with Heron Preston, Virgil Abloh, Justin Saunders and YWP before he established Alyx in 2015.

Visit Williams at Givenchy’s showrooms on Avenue Montaigne and you might find him in a sleek black suit, or more casual attire. He explained that he tends to settle on “something that I’m really into” from the brands he designs, and “I wear that like a uniform for a few months, or maybe even half a year.”

“On a day-to-day basis, when I wake up in the morning and go to the office, I’m usually in one of the two or three looks that have made it into the rotation that I’m kind of just doing variations on,” he said.

“It also depends on the city and the mood. If I’m at the beach, I’m probably wearing the same bathing suit like for weeks,” he said with a laugh.

Asked which five items every man should have in his wardrobe, Williams replied: “I don’t want to answer that question. It should be whatever makes you feel happy and confident. Also, I think it’s probably climate specific.”

Then he offered up one piece of advice, delivered with another laugh: “You definitely need clean socks and underwear though.”

And why not a piece of jewelry? Williams has created his first jewelry collection for men as part of the spring 2023 collection — previous designs were considered unisex — and he’ll also present new variations on the printed sunglasses rap star Rosalia wore on the red carpet at the Met Gala last month.

Givenchy chief executive officer Renaud de Lesquen told WWD that demand for its menswear “has kept growing steadily for the past two years and it keeps accelerating. Staging a dedicated men’s show is the answer to the momentum we have created and the growing interest for the brand we witness around the world.”

He noted it’s also “to give Matthew the space, the time and the spotlight to tell a more complete story. Plus, there is a special kind of effervescence in Paris right now.”

The executive said the designer’s silhouettes have “struck a chord with a new generation of men,” mentioning Givenchy’s new fully knitted TK-360 sneaker as a “perfect example of how Matthew uses innovation to push boundaries. This shoe is one-of-a-kind that gives a unique signature to any look — there’s nothing else like it out there. So we decided to showcase it on our website and give it a high-visibility launch.”