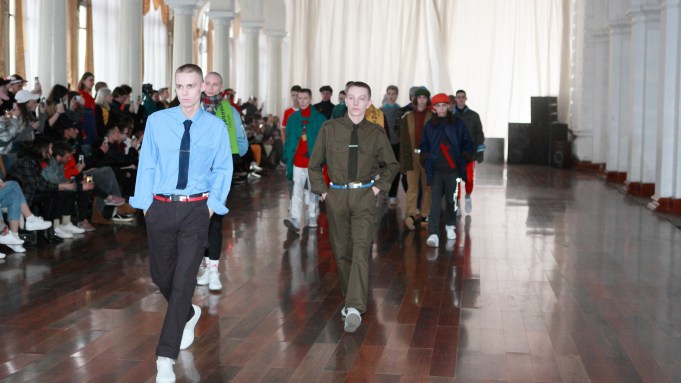 KALININGRAD, Russia — Gosha Rubchinskiy shone a spotlight on a remote coastal city in Russia Thursday, doing his part to trumpet that Kaliningrad will be among the host cities for the FIFA World Cup 2018 — and that his home country could be on the cusp of shrugging off its long economic malaise.

He did it with a diverse soccer-themed collection, a collaboration with Adidas, and that blast of cool that surrounds his fast-growing men’s brand, which is produced and distributed by Comme des Garçons.

“Yes, big events like the World Cup will definitely drive up the economy,” he said in an interview after parading his fall collection in a grand room in a former stock exchange. 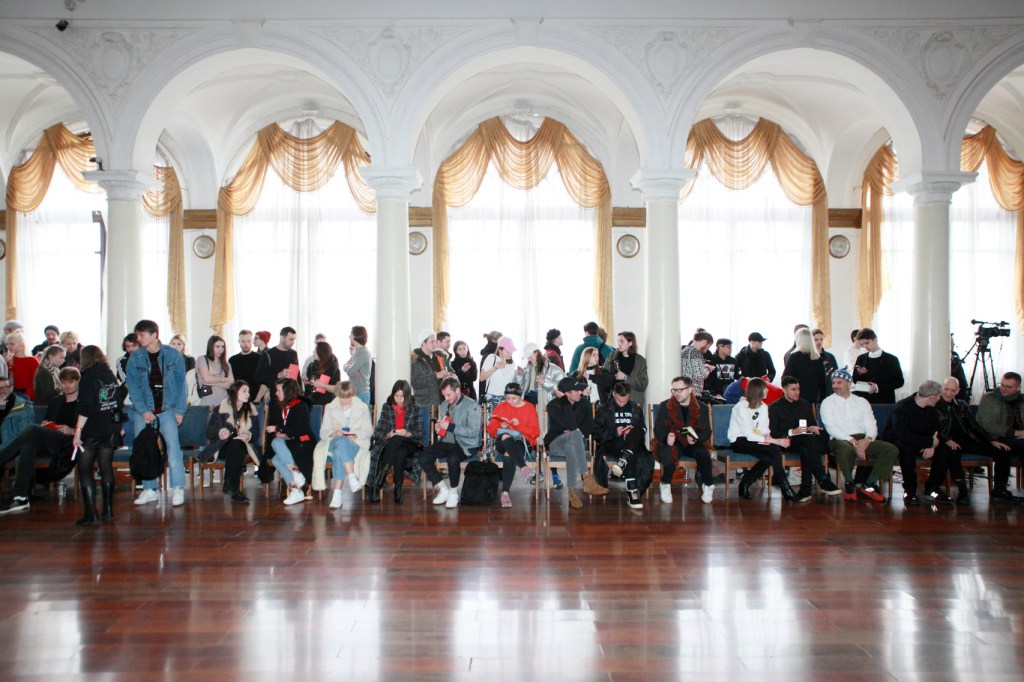 Rubchinskiy’s daring to bring his show — and attracting a smattering of international editors — to the Baltic resort destination was another signal that people “have an interest in what is going on here — and would rather visit than listen or read what they say about a country,” he said. “The Russian market is very important for us — and for me, it’s important that Russians wear Gosha. I am pretty sure the Adidas collaboration will further grow the brand locally.”

Rubchinskiy previously paraded his collection as a guest at Pitti Uomo and in Paris.

The designer said he picked Kaliningrad because of the high-profile soccer tournament, which has Adidas as an official sponsor.

And he noted it was the first time the German sporting goods giant collaborated with a fashion brand on football gear: the Ace 16+ Super and Copa Mundial sneakers; one in its proprietary Primeknit; the other with a flat sole for indoor soccer.

“I said ‘Yes’ also because it reminds me of the successful Soviet athletes with those Adidas tracksuits — a look that is part of Russia’s sport history,” he said, also noting that Kaliningrad “is a former German city, I thought it would be a great idea to do it here as a Russian brand meets a German one.” 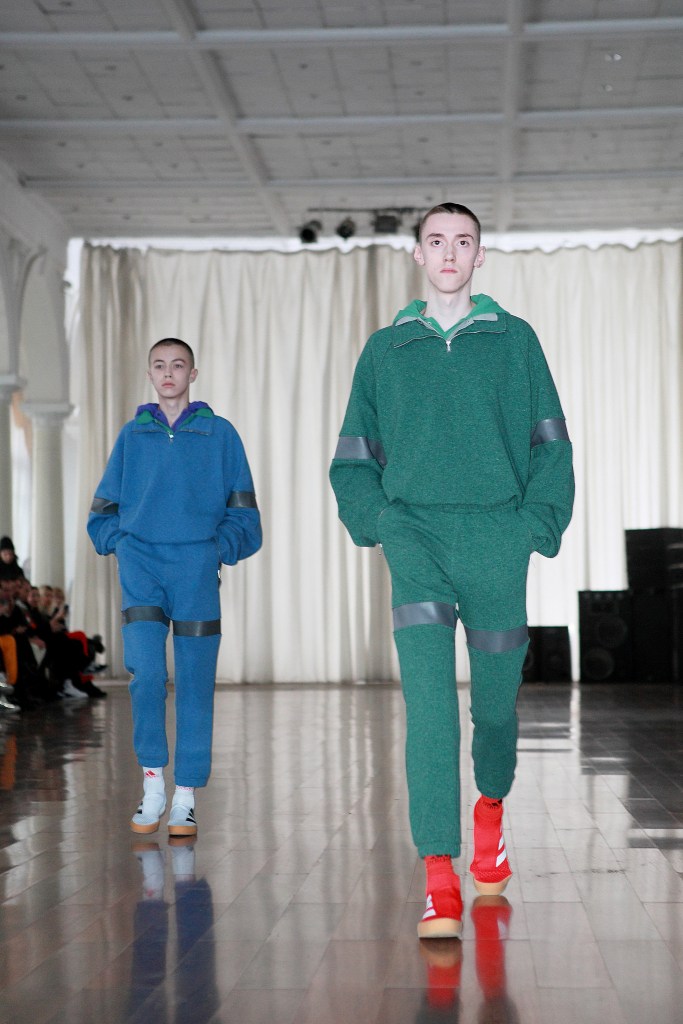 The collection nodded to all the characters that surround the sport, from scarf-wearing fans and club executives to stadium wardens and police officers. The Adidas collaboration spans striped football jerseys, hoodies and accessories with Rubchinskiy’s signature Cyrillic lettering, along with long puffer jackets used by players to keep warm on the bench.

The show had a strong emotional tug. In lieu of a musical soundtrack, models cast from Instagram and via Moscow agency Lumpen walked as voices recounted hopes and fears in previously recorded interviews.

It was consistent with Rubchinskiy’s documentary-style photography of Russian youth, and a wink to his first show, staged in Moscow in 2008.

Models confided to various ambitions: to become a police officer; to provide a better life for his parents, and to invent a new kind of music that will revolutionize the industry.

“Once you hear all the 24 phonograms, you understand the Russian youth – how they think, what they would like to do,” Rubchinskiy said. 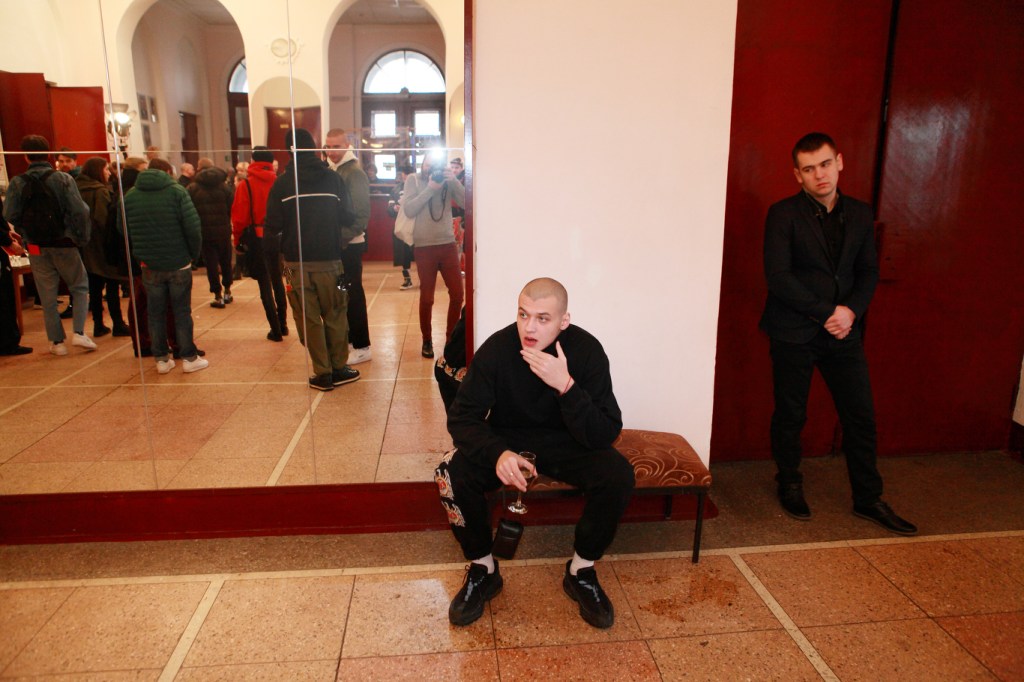 The setting was also close to his heart. The building functioned as a youth cultural center during the Soviet era, an obsession of the designer. “The venue was important for me as one the few buildings that entirely survived World War II,” he said. “It was built following the Renaissance style and I thought it was perfect to do it over here as the last show was done in Florence. So we left Florence but we still remember it.”

Rubchinskiy stressed his label remains close to the skateboarding world and while this offering is linked to soccer, he’s not forgotten his roots. “These two sports somehow are linked. Flat boots used for indoor football can be used for skating, so my guys told me: ‘Those are nice, you can skate and after, go and play football.’”

Located on the Baltic Sea next to Poland and Lithuania, Kaliningrad is a center of car manufacturing, ship building and is strategically located with its ice-free port. Formerly known as Königsberg when it was part of the Prussian Empire, Kaliningrad has a touch of gothic architecture that brushes up against the brutalist styles of the Soviet era. At present, the city center is getting spruced up with cultural attractions and modernized. 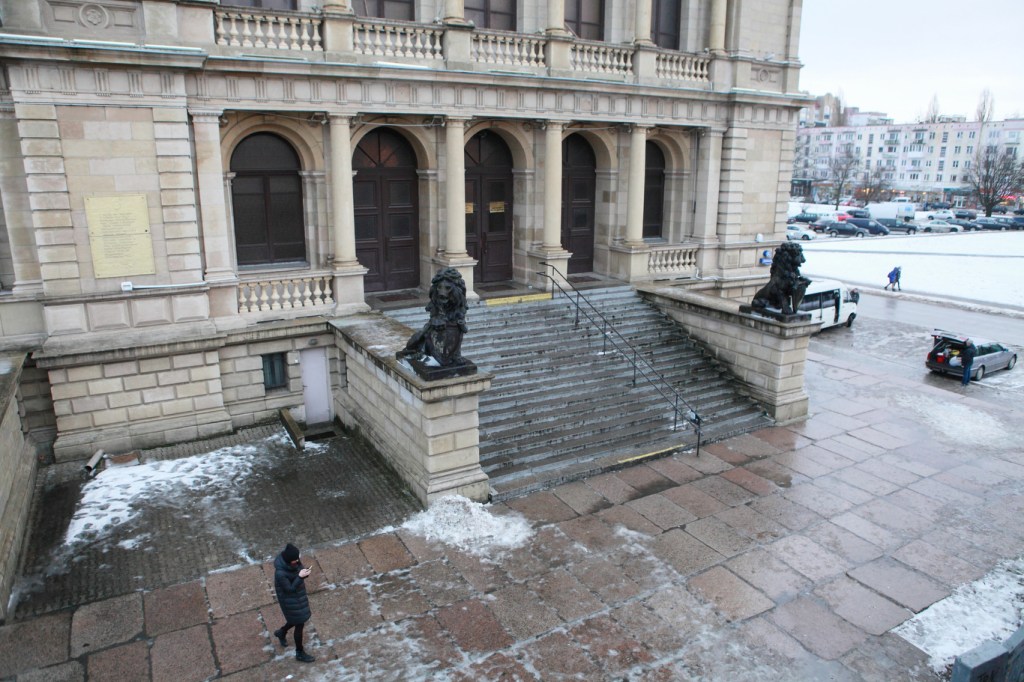 Rubchinskiy capped off the day with a dinner at a grand, U-shaped table and an after party where a Russian band performed.

He said he would continue to show his collections in Russia, touring various cities.