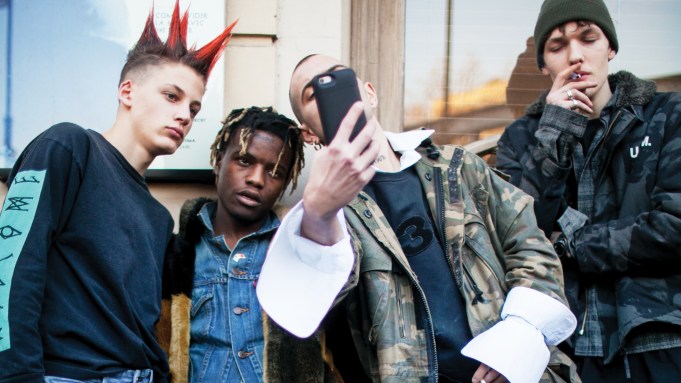 Never mind the action on the catwalk: During the fall men’s collections, Gosha Rubchinskiy went from underground favorite to bona fide street-style phenomenon.

Two years after his Paris runway debut, the designer, photographer and filmmaker has capitalized on the zeitgeist with collections harking back to the collapse of the Soviet Union in the early Nineties. Sightings of his Cyrillic text logo T-shirts and socks went viral from London to Milan and Paris.

Now he is ready to take it to the next level as guest designer of the Pitti Uomo trade show in Florence in June. Rubchinskiy promises the spring 2017 line will mark a change in direction for the brand — although, in keeping with previous collections, he is planning a photography book and video to go with it.

His multimedia process evolved from his fascination with Nineties-era Russian magazines like OM, which introduced his generation to cultural figures such as Helmut Lang, Raf Simons, Hedi Slimane, Kim Jones, Wolfgang Tillmans and Gus Van Sant.

“I wanted to be a person from the pages of these magazines,” said Rubchinskiy, sitting in a showroom at the Paris headquarters of Comme des Garçons, which produces and distributes his line. “I worked as a hairdresser, as a fashion stylist for magazines, I was a costume designer for movies. I liked them all, but I wanted to say something myself.”

His label, launched in 2008, was inspired by a group of Moscow skate kids. Though he had no professional training, Rubchinskiy brought to the table a unique sensibility that led to the partnership with Comme des Garçons in 2012, as well as collaborations with Supreme and Vans.

Meanwhile, his limited-edition photography books have become as rare as gold dust. “I can remember myself in 2005 when I was crazy to find a Hedi Slimane book and it was very rare and special,” he said. “I prefer to do it in small numbers, because it’s good to have something you’re excited about and something collectible.”

From the fans who gathered for the signing of his latest tome “Youth Hotel” at Dover Street Market in London in October, he plucked a few fresh faces for his January show in Paris. “I’m always looking for a spirit — if I feel it, or if I don’t feel it. It’s not about beauty, it’s not about a special type,” he said. “I like characters.”

The display — titled “Save and Protect” after the inscription found on Russian Orthodox crosses — brought together kids from as far afield as Australia, Denmark and the United Kingdom. Three girls walked in the show, though one could hardly tell them apart from the boys.

“I like the idea of androgyny,” Rubchinskiy explained. “It’s not about a gay or straight thing; it’s more about playing with something interesting. I like that special age when you are growing up — you don’t know really what you like and what you want, and you want to try different things to understand who you are.”

The designer recently opened his first shop-in-shop in the basement of the new Dover Street Market store on Haymarket in London. In addition to creating his own furniture for the space, he plans to use it to showcase other people’s books, videos or clothes. It’s all part of his new vision for the brand.

“It’s the first time it’s not a message — it’s about a new feeling for clothes,” he said of the upcoming collection. “If you always do the same, you can’t always go up. You need to do something new, you need to take a risk and I prefer taking a risk. I don’t want to be a one-trick pony.”