The collaboration between the Italian designer and the casualwear company will be showcased through digital content to be released on June 21.

MILAN — “Surprising without being intimidating.” That’s the goal Marco Pirone set for the new course of Italian brand Harmont & Blaine, which is rooted in a Mediterranean interpretation of the preppy look.

The executive, who joined the company last August as chief executive officer, has great ambitions for the ready-to-wear label, which he thinks “has to attract new consumers with a more contemporary vision.” For Pirone — who was previously executive vice president of Kiton, which he joined from Louis Vuitton, where he was CEO of the Italian division — it’s definitely not a matter of age, but more of attitude. “We are lucky to have very loyal consumers, who know what to expect from us. That’s great but not enough. We want to evolve and become more appealing for a wider range of people with a new focus on the international markets,” he said.

In keeping with this vision, Harmont & Blaine, which is celebrating its 25th anniversary this year, is launching a capsule collection of 25 shirts crafted from sustainable cotton and linen while at Milan men’s fashion week on June 21 will debut a capsule collection developed with Milan-based designer Andrea Pompilio.

“Andrea has demonstrated to be a designer who is able to interpret the DNA of a brand giving it a signature cool twist and that’s exactly what we expect from this collaboration,” said Pirone, revealing that the capsule will be unveiled via digital content filmed in Naples, the brand’s hometown.

“What I like about Harmont & Blaine is the color sense, its shirting heritage and its Neapolitan origins that really define the brand’s taste and spirit, and that I personally share with the company,” said Pompilio. “Our spontaneous encounter reflected in an idea of men’s wardrobe that can create a dialogue with a new audience. It’s an enriching challenge for both of us and I wanted to define it through the concept of Made in Naples.”

The collaboration with Pompilio, which has been signed for two seasons, will enhance the steps that the brand, known for its dachshund logo, is taking to inject a new spin into its main collections. “I think that the first signs of this new course are already visible in the winter collection, but it’s in the next spring lineup where consumers will be really able to see the difference,” Pirone said. 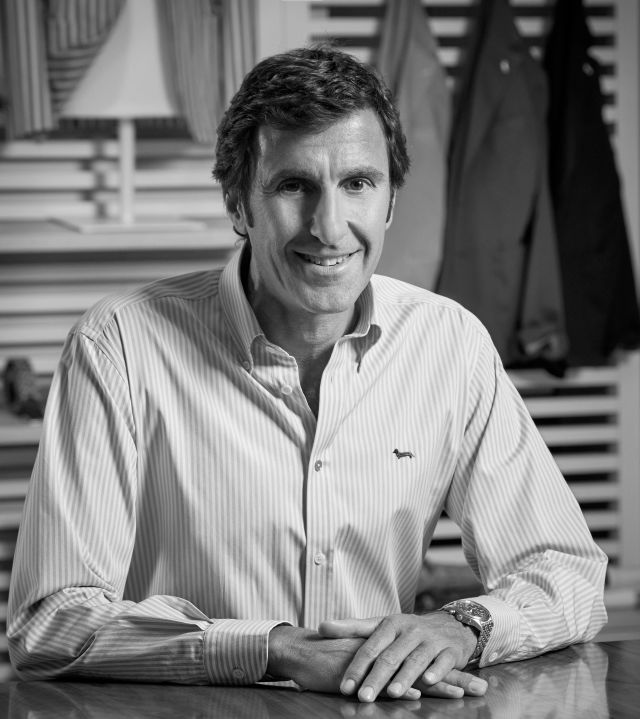 Harmont & Blaine, which in 2014 received an investment from investment fund Clessidra, currently generates about 80 percent of its sales in Italy. “Getting more international is another important goal that we set,” said Pirone. “In the next three years, we expect to have international markets accounting for 40 percent of our business.”

While the brand has solid distribution in Spain and Mexico, the company is still not present in China. “Starting from 2022, we are approaching the market with a retail presence in Beijing or Shanghai,” said Pirone.

According to the CEO when the company will have solid bases in the Far East, the focus will be put on the United States, where the brand is already registering strong online sales. “The United States, along with Spain, are the second market for our e-commerce,” said Pirone, who doesn’t expect to open directly operated shops in the U.S., where Harmont & Blaine is present with a boutique in Miami operated by a local partner.

A company with a strong retail component, accounting for over 60 percent of its business, Harmont & Blaine, which operates 70 shops in Italy, will this year kick off a plan to refurbish its most important stores. “The revamping of our fashion proposal needs to be supported by the look and feel of our boutiques,” said Pirone, who is also working to bolster the brand’s women’s offering. While 90 percent of the company’s sales are of men’s products, the executive explained that in some shops, 25 percent of the clients are women, mainly making purchases for their male friends, husbands or sons. “Even if we remain a men’s label, we want to be more appealing for these women, offering them products that reflect the investments we are making in our core business.”

Heavily reliant on its retail network in Italy, in 2020 Harmont & Blaine registered a 30 percent decrease in revenues compared to 2019, which the company closed with sales of 95 million euros. “I think we will return to pre-COVID-19 levels in 2023,” Pirone said, highlighting that 2021 will still be difficult and that 2022 will be marked by a slow return to normality. “Honestly, I don’t expect any rebound effect in the fashion industry, differently from the food and travel industry,” he said.

Harmont & Blaine is the official fashion partner of AC Milan, providing the soccer team with its off-the-field uniforms. “It’s a very prestigious partnership and we are happy with the return that it is bringing us,” said Pirone, adding that the fashion company has created a dedicated capsule collection under license for the soccer team.