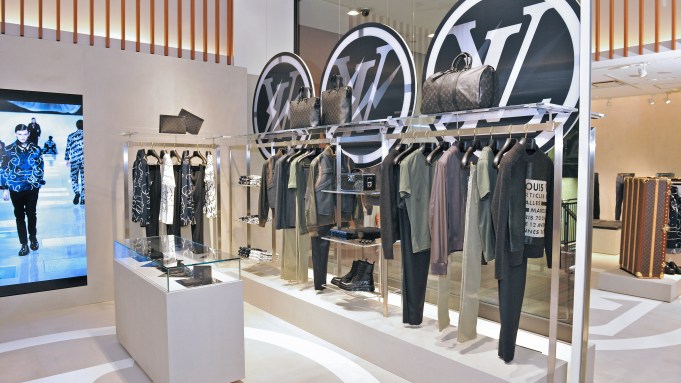 TOKYO — Thousands of shoppers lined up outside the Isetan Men’s store Tuesday night and Wednesday morning to snap up pieces from a special men’s capsule collection Hiroshi Fujiwara designed for Louis Vuitton.

One of Japan’s first hip-hop DJs, Fujiwara is an influential music producer and is also sometimes called the “godfather of Harajuku fashion,” having designed several popular streetwear brands.

Fujiwara worked with Louis Vuitton’s men’s artistic director Kim Jones on a range of ready-to-wear items, shoes, accessories and four limited-edition versions of the brand’s Monogram Eclipse bags. In minimalist black and white tones, the collaboration items carry the logo of Fujiwara’s own label, Fragment Design, alongside the Louis Vuitton logo. Prices for the bags range from 196,000 to 301,000 yen, or $1,742 to $2,676. All the goods are sold exclusively at a pop-up store at Isetan, which runs through July 19.

Fans of Fujiwara and Louis Vuitton began lining up around 8 p.m. Tuesday night, and by two hours before opening time the queue was snaking around the large block containing Isetan’s buildings, and even continued underground into the subway station. The first 400 people in line were able to draw at random a numbered ticket, which dictated when they would actually be able to enter the store. A spokeswoman for Isetan Mitsukoshi said she expected those who didn’t get in on the first day to wait overnight in hopes of being able to enter and make a purchase the following day. She said some of the limited-edition items are expected to sell out within about three days of the pop-up store’s opening. In addition to the capsule collection, items from Louis Vuitton’s fall men’s collection are also available at the store.

Jones said he has been a fan of Fujiwara’s since he was a teenager.

“I’ve known Hiroshi since I was probably about 19. I used to work for someone in the U.K. that was one of the people that imported his brands. And I’ve just been a huge fan of his ever since I was that young,” Jones said. “He’s really popular, not only in Japan but everywhere — he has the Midas touch, and I just thought it would be really cool to do something with him because he’s been one of my heroes since I was a kid and one of the people that inspired me to be a designer.”

The pop-up store’s design incorporates motifs from Jones’s “future heritage” theme for the fall 2016 season, as well as elements from Fujiwara’s store The Parking, which is located in an old parking garage in Tokyo’s Ginza district. It is characterized by neutral tones, raw concrete and frosted glass.

Jones, a frequent visitor to Tokyo since 2001, said he does all of his own personal shopping in the Japanese capital. For the opening of the pop-up on Wednesday, he was wearing pieces by Sacai, Undercover and Fragment. He said he would welcome the opportunity to work with Japanese designers such as these in the future, many of whom he counts as friends.