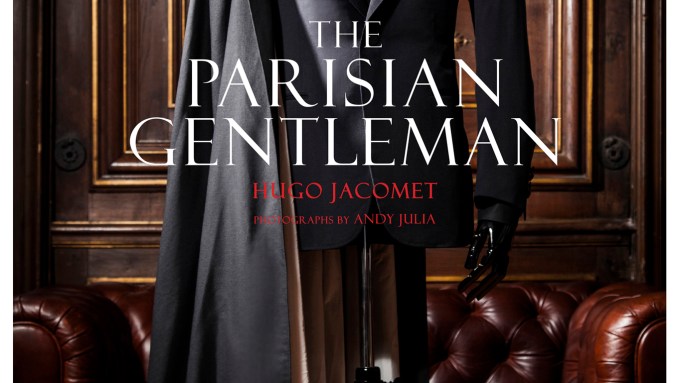 Who are the great men’s wear icons? Well, according to blogger, filmmaker and lecturer Hugo Jacomet, who founded the Web site The Parisian Gentleman in 2009, they’re still Cary Grant, Gary Cooper and Fred Astaire.

Jacomet is a man obsessed. The objects of his passion are the shops and ateliers that offer the bespoke men’s wear and handmade men’s furnishings that interest him. They are epitomized by the small house Simonnot-Godard, which he writes about in his new book, “The Parisian Gentleman,” in a chapter subtitled, “The Most Beautiful Pocket Squares in the World.” The book has photos by Andy Julia and forewords by James Sherwood and G. Bruce Boyer and is due out from Thames & Hudson on Dec. 7.

“All their patterns are woven, not printed,” Jacomet says reverently of the handkerchief-makers, and he writes about the way their small pieces of fabric travel from one place in France to another to be created, mercerized and then finished in the correct way, with perfect hand-rolled edges. He also tells the story of Benjamin and Gersende Simonnot, members of the family that has owned the company since at least the 1830s and who revived this faltering fabric firm by focusing solely on one item.

Jacomet, a former TV producer and art director and a dandy himself with long white hair, runs his blog with his son Greg and six other writers. In addition to Simonnot-Godard, he’s also a big fan of the shirts created by the celebrated Charvet. It’s best known for its white shirts, and it offers hundreds of different bolts of white fabric from which to choose. The company, he writes, also comes up with 5,000 new ties a year, keeping 8,000 available at a time. He points out in “The French Gentleman” that Charvet, founded in 1838, actually invented the idea of the custom-made shirt from a chemisier; before that, most gentlemen simply had their shirts made by seamstresses who chose the fabric themselves. These shirts were billowy, not fitted, a refinement of detail that the firm added, too.

The Colban family, who own the company, bought it in 1965. Denis Colban, then a major supplier to the firm, received a phone call one day from French President Charles de Gaulle. De Gaulle had been appalled to learn that his shirtmaker was about to be sold to American investors by descendants of its original owners, who had no interest in it. He wanted Colban to buy it, and arranged for him to get government financing to do so. Despite continued speculation the firm might be sold, it remains firmly in the Colban family’s hands.

Among the customers in Charvet’s long history were Marcel Proust (who name-checked it in “Remembrance of Things Past”), Jean Cocteau, Paul Verlaine and the dandy Robert de Montesquiou. Denis Colban coped with the shopping environment of the time, in the Sixties and Seventies, by resisting the urge to go downmarket and, instead went higher than ever, increasing the range of the company’s offerings and their luxuriousness. It proved an astute move.

Then there are shoes. Jacomet is unabashedly crazy about handmade footwear, whether it’s fairly traditional or in striking designs and colors, shown in his new book in versions including blue, green and fuchsia washes and orange patent leather (the last appears on a double-page spread against an Eiffel Tower lit up at night). He recalls being a penniless student who saved up small sums in order to buy a pair of J.M. Weston loafers he coveted.

Jacomet’s next book will be “The Italian Gentleman.” What is the difference between a Parisian, an English and an Italian gentleman in terms of style? “Beginning with George Brummell in the 1800s, everything is coming from London at the end of the 19th century and beginning of the 20th century,” he says. “They had to go to London to the academy. London tailoring — it’s all about understatement, discretion. If someone gives you a compliment, for an English gentleman, the tailor didn’t do his job well. But nobody would be offended if you did!

“English style is all about tradition, maybe from military tradition in the beginning.

“Italian is exactly the reverse, all about showing off freedom. They’re not struggling every day to follow the rules of their grandfathers. They just want to break the rules. Every day they speak with their hands, so they need something deconstructed. They want their Italian sprezzatura, the art of looking nonchalant, making people believe you don’t care about what you wear.

“We French are exactly in the middle. The highest level of bespoke tailors, Cifonelli, Francesco Smalto, they all come from Italy. This is what I try to explain — claiming that we have a Parisian style would be kind of a Gallic pretension. We are the king for the women’s haute couture [and] we have added something very linked, added a level of sophistication, between the best of the two worlds. For example, I have been going to Savile Row [wearing Cifonelli from Paris, and] when they look at how the details of the lapels are stitched, they say, ‘Oh, my God, this is so Parisian, the sophistication of all the small details.’ The French suit is a little more structured, the British is discreet, Italian is charisma. When you put [a French suit] on you, it’s like armor.”