In the Spotlight: Savas

The bespoke leather men's brand is expanding into ready-to-wear.

Savas's Denham jacket is the most popular style.

Backstory: Yarborough grew up in Alabama, but it wasn’t until she went to Central Saint Martins in London that she became fascinated with how men dressed and made the decision to focus her career on men’s wear. After graduating with a BFA in men’s wear in 2012, she returned to the U.S. and got a job working with Alabama-based Billy Reid, eventually becoming his head of men’s wear. It was during that time that Yarborough “fell in love” with the craftsmen who worked on Reid’s leather pieces, and after in 2014 to start her own brand, it was leather that she focused on. “I realized there was no one else doing leather in a luxury bespoke way in the U.S.,” she said. She launched Savas in 2015 and set up shop in Nashville where she created custom-made leather and fur outerwear. Last fall, she expanded her collection into made-to-measure, allowing customers to customize stock pieces. Now, Yarborough is launching her first ready-to-wear collection, a tight lineup of some of her most popular styles including bombers, blazers, hoodies and overshirts in her proprietary vegetable-tanned hides in wild kangaroo, hand-dyed lambskin and full-grain calf suede, all of which are byproducts of the food industry, she stressed, and would otherwise be discarded or burned. 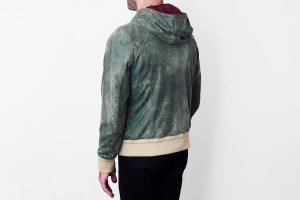 A leather hoodie from Savas.  9

Key pieces: Yarborough’s most popular piece continues to be her first design, the Denham, a brown suede, hand-dyed jacket that is intended to look like it was created from jeans that “had been buried for 100 years,” she said. It is available in both custom and as well as off-the-rack. Other key pieces include the Legend, which she described as “my take on the biker jacket,” a center-zip model with a subtle Western yoke, two chest pockets and a “straightforward silhouette” that is most popular in black with silver hardware. Other styles include the Lowry, a classic overshirt with Western details and the Jackson, a zip-up leather hoodie with curved pockets. Her signature is two 22-karat gold dots that she adds to the exterior of every piece. 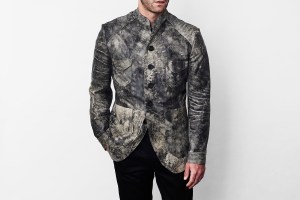 The Savas jacket has a unique finish.  9

Distribution: Yarborough sells her collection out of her Nashville atelier where music industry celebrities including Jason Aldean and Jack White visit to have custom pieces created. And although her primary business continues to be men’s wear, she also works with female entertainers such as Reba McEntire and Miranda Lambert, designing pieces exclusively for them. She also holds a series of trunk shows around the country every year. Eventually, she’d consider wholesale — but in her own way. “I think there’s a space for us but it would be very strategic and very small,” she said.