MILAN — Is trap music the new pop? Probably not yet, but if you are a twentysomething Italian kid with a penchant for underground music and social media, it’s likely your playlists are packed with songs from a new wave of artists from the country’s trap scene.

A relatively new genre in Italy, trap (a hip-hop style that originated in the American South) has rapidly graduated to the forefront of pop culture, tapping into the youngest generations, especially. The list is crammed with names including Ghali, Sfera Ebbasta, Achille Lauro, Mahmood and the Dark Polo Gang to name a few.

“Trap music belongs to the younger generations, adults don’t like it…When the Sex Pistols became famous they didn’t have a mature audience. Now they have it. In a way, trap music is as disruptive as punk was in the Seventies,” said Alessandro Massara, president of recording company Universal Music Italia.

Fashion took note. Accustomed to sensing cultural shifts and zeitgeist, Italian labels have rushed into partnerships with local trappers and hip-hop artists, helping cement the latter’s status as popular icons and, on the other side, to leverage the cool factor they bring in hopes of driving sales.

“It’s undeniable that a lot of the trap, hip-hop and rap faces embody the new multicultural, urban and progressive generation, a cultural ‘new wave’ able to interpret the present and future of our country,” noted MSGM founder and creative director Massimo Giorgetti, who counts Mahmood, the 2019 winner of Italy’s music contest Sanremo, and Ghali among his fans.

“I’ve been among the first to believe in this new generation of Italian performers since I debuted the men’s collection but also when I only had women’s wear I was receiving requests for men’s pieces and collaborations from Italian and American rappers,” echoed Fausto Puglisi, whose highly decorative and embellished fashion pieces resonate with trappers’ penchant for flamboyant fashion choices. “Fashion too often is tucked away in its ivory tower while it should get ‘dirty’ and cross-pollinated by the street and real life,” he added.

After selecting a group of Italian music celebrities to appear in his fall 2018 men’s look book, Puglisi has most recently collaborated with the Dark Polo Gang on its latest tour, outfitting the group with gladiator-inspired skirts featuring hardware and crystal embellishments paired with equally flamboyant leather bomber jackets. Before Puglisi, Dolce & Gabbana selected Italian trapper Tedua to walk the spring 2018 men’s show while that same season Ghali and Sfera Ebbasta appeared on the catwalks of Damir Doma and Marcelo Burlon, respectively. 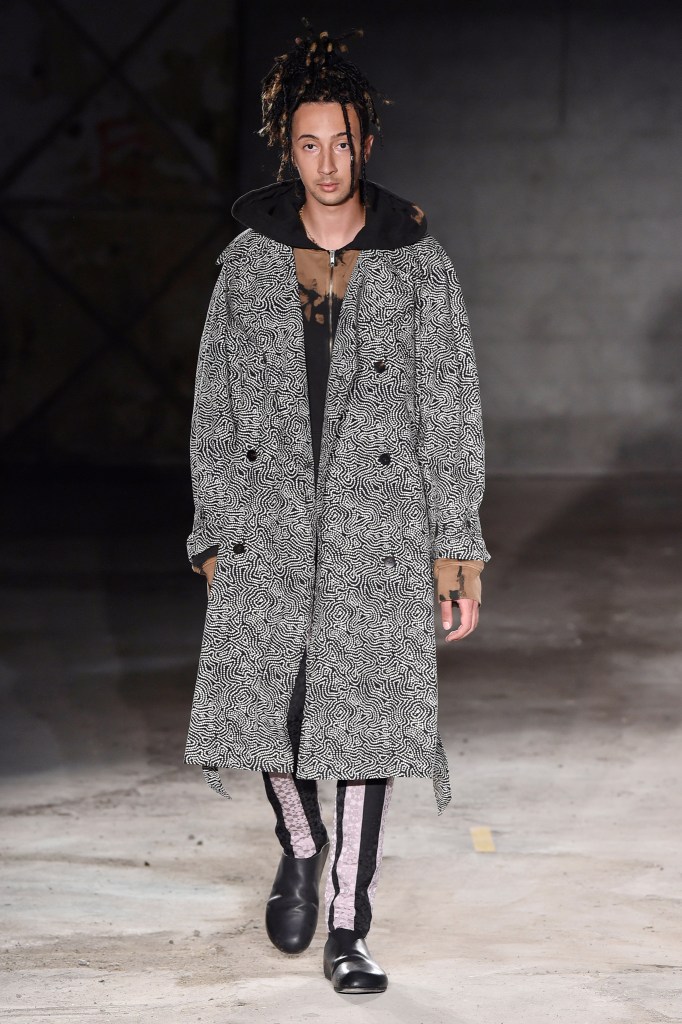 It’s always been helpful for brands to keep up with emerging artists, but it’s more important today given how they sprout from social media and graduate to popular culture in the span of a few months.

But does it pay?

“The number of followers is [the same as] money. The return on investment is not only sales-related but also linked to marketing assets. A lot of these partnerships are seen as brand-building activities and [gaining] social media followers represent a value for the labels,” noted Alessandro Maria Ferreri, chief executive officer and owner of The Style Gate consulting firm.

“I think that these artists’ status of today’s storytellers and their strong link with Millennials and Generations Y and Z, compel fashion labels — often weaker in terms of communication assets — to endorse them in order to meet the audience’s taste and needs,” concurred Stefano Sacchi, a Milan-based fashion consultant and former chief executive officer at Breeze Giuliano Fujiwara Inc.

Iceberg is one such brand. The label’s partnerships with music types are rooted in its DNA and have always grown “organically,” according to creative director James Long. The designer noted “social media is the first touchpoint between brands and customers. Of course all of these artists have a huge fan base and especially young customers get in touch with a brand for the first time through what the talents they love are wearing.”

For the fall 2018 show’s soundtrack, Long selected a composition titled “Iceberg” from the Belgian-born artist Laïoung, who “discovered the brand during a magazine shoot. He loved it and came up with a song that he presented to us. We loved it and decided to use it for our street fashion show,” Long said, adding he’s eager to collaborate with music artists for co-branded capsule collections.

Despite their up-and-coming status, these artists are backed by stylists, who are pushing them to raise the bar when it comes to fashion choices. Beyond streetwear — still strong — they’re looking at upscale designers positioned in the upper contemporary and luxury segments.

“I’ve channeled a really fashion-y approach into Ghali’s style, as if I was doing an editorial shoot,” explained Ramona Tabita, the stylist to the Tunisian-native musician, who also graced the cover of Italy’s GQ April issue.

Clad in a Gucci striped jacket embellished with sequins inspired by Elton John’s costumes for his 2018 tour or sporting pieces from N.21, Alyx 9SM and Off-White in his latest music video, the singer’s approach to style has evolved along with his fame. “Certainly being supported by big brands has provided him with cred,” underscored Tabita, adding she was hardly turned down by any labels she asked to collaborate with, including Salvatore Ferragamo, Versace, Bottega Veneta and MSGM.

“The synergies between fashion and rap artists stem from the latter being representatives of the ‘street culture,’ directly connected with their fans,” underscored Ferreri. “At the beginning they were courted mainly by streetwear and sneaker brands, as those were categories easily linked to the rap scene.”

The winds have changed. Also tapping into upscale fashion pieces is stylist Nicolò Cerioni, who works with Achille Lauro and the Dark Polo Gang. In addition to Puglisi, Cerioni selected the likes of Versace, Moncler, Prada and even women’s wear brand The Attico — which lent its Eighties-inspired style to men’s pieces for the first time — for the boy band.

Cerioni noted it’s not always been an easy task. “Sometimes big brands don’t necessarily understand the potential of a public figure, it’s more common to see up-and-coming brands outfitting young talents,” he said. “Marcelo [Burlon] was among the first to sense the zeitgeist of streetwear brands aiming to become upscale and getting involved in outfitting celebrities to reach the goal.”

Ylenia Puglia, a fashion and image consultant to a range of personalities including Sfera Ebbasta and Guè Pequeno,  agreed. “It’s not always been easy to find brands eager to collaborate, especially at the beginning, because Italian companies didn’t really think this genre and its iconography spoke to local customers,” she said.

In the age of social media and as a music phenomenon strongly connected to the youngest generations, these fashion choices may not necessarily be approachable and viewers may not immediately identify with them.

“I don’t think Ghali’s style is really relatable for young fans, bur rather, it’s intriguing,” said Tabita. She said that during one of the artist’s concerts, a young kid backstage selected the singer’s Gucci tracksuit as his favorite fashion piece. “It was an approachable item, it spoke to that target, despite being luxury, ” Tabita added.

“When fans cannot identify with the precise product because they cannot afford it, it’s likely they will end up buying something similar,” echoed Puglia.

Taking into account the social media exposure and cultural frame in which these artists move, Puglia explained she has always championed an “all-around approach.” Leveraging her former editorial experience as a fashion editor to Hearst-owned, Italy’s Cosmopolitan magazine, she serves as a bridge between artists and brands, curating the former’s public persona, including sponsored partnerships and social media strategies. “It’s pointless to do a styling effort when all other communication assets are ineffective,” Puglia explained.

Boosted by endorsements on social media and public appearances of the artists, designers are also experiencing a factual return on investment. According to Puglisi, partnering with popular artists such as Gemitaiz, Vegas Jones, Luchè and Capo Plaza on the fall 2018 look book has generated buzz and traffic toward the label’s men’s line. “A lot of those who didn’t know me have bought my T-shirts because they saw them on special and creative types; we reached a new audience, who connected with me through music,” he said. 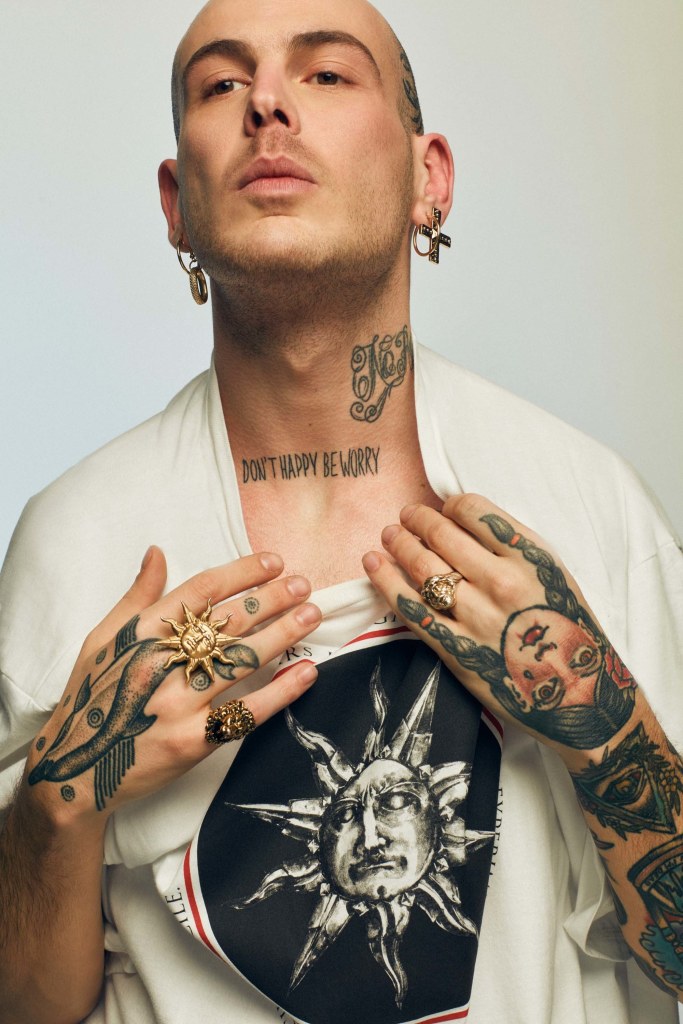 “The younger generations are really aspirational despite their [lower] spending power. They see these artists’ paths as examples to follow, potentially leading them to become luxury customers, too,” Ferreri said.

In Long’s view “these young customers already have the economic power to pick up the brand they like and they’re more independent in doing this compared to the past generations.”

As names of fashion labels often find their place in the lyrics of trapper’s songs, fashion serves as a means of self-assertion and celebration of wealth. According to Sacchi, this is pivotal in engaging both “fans aspiring to that excessive lifestyle mentioned in their lyrics, and those who see it as a motivation for a better future, despite not necessarily identifying themselves in that fashion or aesthetic proposition.”

Similarly, Ferreri underscored that trap music in Italy and Europe hides a peculiar and engaging cultural mind-set, rooted in “social redemption,” he said. Fashion choices “telegraph the message that instead of protesting and embracing debauchery you have a chance to step up by working hard,” Ferreri added.

Cerioni also underscored “trap music has never really ever been an anti-establishment form of expression, but rather a form of social redemption by way of success and economic achievements,” making it a perfect match for fashion brands.

Trap may not be on a trajectory to outpace pop music yet, but consultants and stylists interviewed were unanimous as they underscored the genre is destined to survive, evolve and keep on attracting fashion players, because of “the artists’ ability to speak to a broad range of customers,” Sacchi said.