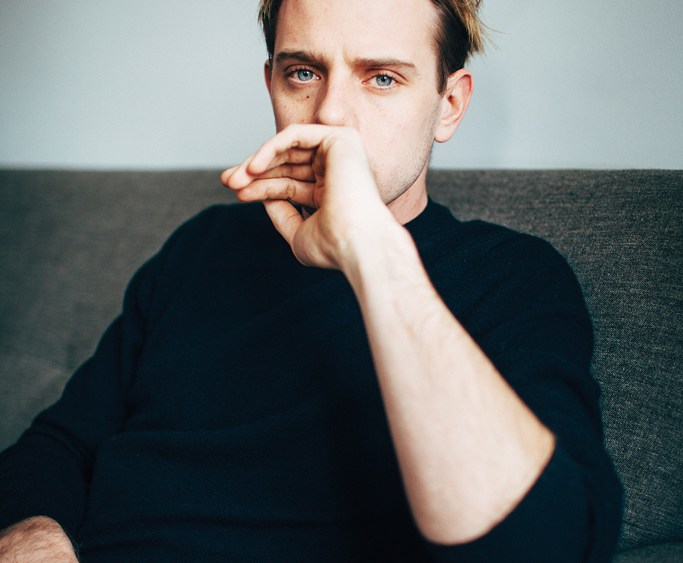 It was never Jonathan Anderson’s aim to be so closely bound to androgyny—he never set out to be the designer who would unleash the unisex creature that’s now stalking men’s catwalks worldwide.

In fact, the designer of the London-based J.W. Anderson collection and the creative director of Loewe doesn’t like the A-word at all. He believes what he’s doing with his shrunken, body-baring knitwear, jewel-like sculptural embellishments and off-the-shoulder pinstripes is much more nuanced—and provocative.

“I never set out to work on the concept of androgyny. For me, it was more about trying to find a wardrobe that would fundamentally appeal to both men and women: Trying to find the right shirt, the right jeans, the right trouser—but on different landscapes. Trying to find a uniform, something we’ve been doing from Day One,” he says from the Loewe studio in Paris.

“I find androgyny quite a dated concept. I feel it’s kind of like a pun, and that it represents a period of time in fashion.”

Who can blame him? Androgyny, as an aesthetic, comes and goes with every generation in fashion, hair or makeup—and the word itself has become a cliché. “My vision is trying to find this balance within the taboo of where people want things, what they’re comfortable with. Is this good on a man or not?” he asks, adding that his quest is to find how far he can push those comfort levels and find newness. He also designs his men’s mainline and women’s pre-collections at the same time, allowing them to spark off each other, and is always inspired by ambiguity.

“We’ve had headscarves, ribbed knit looks, ribbed trousers, lace boiler suits and high sandals. You love it or you hate it. I don’t want it to sit in a gray zone. I want my work to be something that makes people think.”

There will be ample food for thought in Anderson’s future collections. Right now, he admits, he’s going through a bit of a cleanse. “I’m very into the idea of nothingness, the idea of the nonclothing. Let’s see where that takes me.”

The journey so far has been fast—and intense. He launched J.W. Anderson in 2008, initially with an off-schedule show during London Fashion Week, and by 2013, he’d secured substantial minority investment from LVMH Möet Hennessy Louis Vuitton; the star creative role at Loewe, and a stint with Donatella Versace designing a one-off capsule collection for Versus. Versace, who was dubious about hiring Anderson at the start, later called him “a great talent, a genius.”

In that short space of time, Anderson had also pumped out two highly successful collections for Topshop, filled with stiff, structured denim pieces, and nabbed the awards for Emerging Talent and New Establishment in 2012 and 2013, respectively, at the British Fashion Awards.

Born in Northern Ireland in 1984, Anderson studied men’s wear at the London College of Fashion. He graduated in 2005, and went on to work in visual merchandising at Prada under Manuela Pavesi. He consulted for several brands before launching his signature label, and rapidly became part of a generation of hot London talent—including Simone Rocha, Christopher Kane, Nicholas Kirkwood, Roksanda Ilincic, Erdem Moralioglu and Jonathan Saunders—not seen since the early Nineties when Alexander McQueen, Hussein Chalayan and Philip Treacy were coming to the fore.

Unlike so many designers, Anderson has never wavered from his core vision: to explore the blurred lines between the genders—and simultaneously serve up a polished ready-to-wear collection.

“From the beginning, he wanted to put something out there that was him. He’s been evolving a specific point of view—and he sticks to it. And his designs speak to culture and to counterculture,” said Humberto Leon, cocreative director of Kenzo and cofounder of Opening Ceremony, which has been carrying J.W. Anderson since the line launched in 2008.

Nelson Mui, men’s fashion director at Hudson’s Bay Co., called the J.W. Anderson fall collection, with its nipped waists, flowing sailor collars and big, flower-shaped buttons on coats “a knockout. It was very, very distinctive, androgynous with Seventies ideas, but it defied categorization.” Defiance is what his customers want, Anderson says. “We have a very loyal group of consumers who come back to us, and they’re part of a journey, the collecting of things. If we go too simple, they don’t want it. They want something that has an idea, and they want to be challenged. Men in recent times have changed their perception of how they dress, especially with social media, especially with people taking pictures of themselves. People are so much more aware of what they look like, what they wear, and how they are perceived. Men have become more body-conscious.”

Damien Paul, head of men’s wear at Matchesfashion.com, which stocks the J.W. Anderson label, says the designer’s influence has been “everywhere in recent seasons,” and Anderson is gaining a strong following in Europe, the U.S. and Asia. “He has such a clearly defined point of view, but at the same time, he’s incredibly canny about his collections: In the showroom, we always find appealing, commercial product that riffs on the ideas he presents on the catwalk. His audience is growing, and his sales continue to increase every season. His pin-striped separates and landscape prints for spring have already begun to sell out in some sizes,” Paul says.

Unlike other designers who save the catwalk for their most theatrical—or editorial—pieces, Anderson aims to produce every single look he sends out. “I don’t care if we make 10 or 10,000, they have to be able to buy it. Catwalk is a small edit of the collection, a very concise, energetic moment to sell people the idea,” he says.

Those seasonal catwalk narratives are fundamental, he believes, and the future of luxury sales rests upon them. “The collections have to excite people. The idea of people shopping at an airport is never going to keep this industry going. You want people to feel they are on a journey with you. You want people to walk into a store and say, ‘That is the perfect wallet,’ or, ‘That is the perfect sweater, perfect for me right now in this moment.’ Trousers only have two legs, a jumper has two arms—there is only so much you can do—so you have to make it have a story.”

He’s not, however, designing in a theoretical bubble, and Anderson, who turned 30 in September, says he cares deeply that his customers actually wear his clothes, in a variety of ways, over the years. “The consumer is first—no matter what. There is nothing that drives me more than the excitement of consumers than going on Instagram and seeing whether people like certain things—and what they don’t like. Instagram is a really good barometer, and one of the most powerful mediums out there,” says the designer, who works the network to build his brand, seasoning his own feed with personal details, inspirations, observations, favorite album covers, backstage snaps and collection images.

Of late, there’s been a shot of a hot lemon drink—Anderson was sick last week—and a quote from fellow Irishman Samuel Beckett: “To find a form that accommodates the mess, that is the task of the artist now,” to the cover of The Human League’s 1981 album “Dare” (Anderson has had his head stuck in the Eighties of late).

His campaigns for Loewe have a similar feel, with a mix of vintage photos—Steven Meisel kissing an unnamed man—a black-and-white shot that recalls Bryan Ferry in his Roxy music days, and men and women, like twins, posed side-by-side, product in hand.

The visual messaging mirrors the man: Intense, cerebral, eloquent, utterly passionate about the creative process—and savvy about commerce. Simon Whitehouse, chief executive officer of J.W. Anderson, says he understood “within 16 seconds of meeting” Anderson that the designer was not only creative, but an entrepreneur as well.

Anderson’s signature label has an advanced contemporary price point, and a young, street-style customer. He says J.W. Anderson and Loewe are drawing a “very large” American market online, a strong domestic one in the U.K., and has a big consumer base in Korea and Japan.

Inevitably, J.W. Anderson and Loewe also nourish each other, with similar references and silhouettes and shapes. The Seventies thread in his recent signature collections, Anderson says, derives partly from his work at Loewe. “It was the most important period for Loewe. There was a freedom that happened in that moment that was extremely important.”

Anderson says he’s been time-traveling through the decades—and not just the Seventies—as part of a creative exercise for both brands. “I’ve taken and learned what I needed from the Eighties and the Nineties to recalibrate my fashion history—and to challenge perceptions. I love the idea of looking at the Eighties,” says Anderson, whose fall women’s collections were packed with references from the decade. “It was such a moment in terms of men’s and women’s wear. So much wit.”

For all his conviction about clothing, Anderson draws a fine line between his customer and himself. The designer, with the sculpted features and the big, expressive eyes, is almost always dressed in jeans, a T-shirt or sweater, and sneakers. “When I was younger, I used to wear fashion a lot,” he says. “I will wear some [of my own] things, but I find it very difficult. When you start making clothing, when you start working on it day and night, you ultimately need to be blank. It’s very difficult to be the figure at the end of a catwalk wearing the show. How do you progress out of it? How do you reject it? The joy that I have is seeing people in it—how they change it, make it different, keep it fresh.”

And do it without caring a hoot whether it’s androgynous or not.