The designer has built a $150 million business on everything from T-shirts to ping-pong tables. 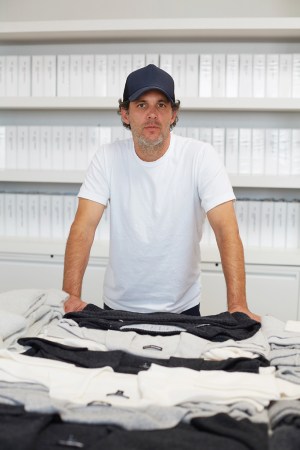 Walking into James Perse’s sun-filled Marina Del Rey, Calif., headquarters is like entering a Zen hotel. Across from the white reception counter, where visitors are greeted with a peach-rosemary iced tea and guacamole-topped tortilla chips, sits a Perse-designed ping-pong table flanked by two surfboards. Exposed wooden beams and arches soar above a wide aisle that divides work spaces concealed behind low, perfectly spaced white walls. Perse’s minimal furniture lines the central passageway, drawing the eye toward a glass wall at the other end of the building that opens into a garden.

“Believe it or not, the ping-pong table is our best-selling piece of furniture; it’s sold millions of dollars. It’s one of those gotta-have-it things,” said Perse, 42, who’s dressed in a white T-shirt, navy drawstring pants, white canvas sneakers and a navy baseball cap.

It’s what you’d expect from a guy who perfected the expensive T-shirt and now reigns over a casual luxury empire with annual sales of $150 million and 60 stores in the U.S., U.K., Japan and Canada.

“People would always say, ‘You should do a cashmere bikini or something.’ But that’s not me. So I did a bike and a ping-pong table instead. That’s my equivalent of a fashion item.”

He knows a thing or two about profiting from the impulse buy; at $24,500 a pop (the ping-pong/pool table hybrid costs $29,000), his “fashion item” nets a good deal more than a cashmere bikini or an “It” bag.

Perse, who started the business with a $10,000 loan 17 years ago and serves as chief executive officer, said, “There’s a strategy to everything, from each of our stores to our office space. I’m a control freak. But trust me, you can never finish everything.”

There are things he’d like to do better, such as building a presence online. “We’ve never done any marketing or advertising. But with everything so digital, it’s time for us to have a louder voice. We only just got on Instagram,” he said with a laugh.

Perse said that, to date, the thing he’s most proud of is taking the business from 70 percent wholesale/30 percent retail to the reverse, noting, “It’s tough to be in two businesses. I’ve spent the last five years trying to shift the balance to retail, where we can control our destiny.” He said the company will maintain existing wholesale accounts, and even grow them in Europe, but “as retail becomes bigger, those percentages will shrink.”

Retail expansion in the next two months includes new locations on Bleecker and Church Streets in New York, as well as a redesigned Madison Avenue store and a new concept that brings together apparel and home. Abroad, he’s opening on Dover Street in London (he’s also scouting a flagship location there), in Saint-Tropez and Mexico. Down the line, he’d like to open stores in Paris, Korea, Hong Kong and the Middle East.

Experiences, he believes, are the only way to survive in retail. “I think what lit the fire under everyone’s tush is e-commerce. It’s an incredible way of reaching your customer that makes life easy. So you need to give them a reason to not just buy online.”

Having retail stores has also enabled Perse to evolve his product offering. “I started off with T-shirts, but you can’t say we are a T-shirt business anymore. What we have built with retail is an extremely diversified business with no concentration in a single category,” he said.

In his stores, he’s introduced cashmere sweaters, bed and bath lines, and an outerwear label called Yosemite, which has grown into a multimillion-dollar business now comprising mostly men’s jackets, workout shorts, swimwear and rash guards. Perse himself is an avid ice hockey player, trail runner and mountain biker who also occasionally surfs in front of his Malibu home, but his men’s wear now includes casual suits appropriate for work or dressier occasions.

Perse’s next big play? Accessories. “We’ve dabbled, but haven’t even scratched the surface of what we could be doing,” he said, noting that later this year will see a rollout of men’s and women’s bags and shoes, jewelry and small leather goods, all done in-house. There will also be limited-edition one-offs that “will keep people guessing.”

One thing he doesn’t want anyone to ask is whether he’d ever sell his company.

“I’ve been approached many a time, but I’m so godd—ed busy I couldn’t even think of selling the business,” he said. “I have so much more to carry out, so it’s not something on my radar.”

As for his competition, Perse said, “I don’t really think much about competition, so I think Apple would be a good goal. The way I see it, it’s the world’s greatest loved brand and that’s what I am trying to build.”

Perse projects sales growing to $350 million in the next five years and added, “I think what would make us a $1 billion brand is building our accessories. That could literally drive our business through the roof.” Currently, apparel comprises 85 percent of the business, with home furnishings and furniture making up the rest.

Speaking of roofs, Perse hints at his largest project yet: a hospitality-meets-retail concept to launch in one of his favorite places: Cabo San Lucas, Mexico. He’s been talking about it for a decade, and he’ll finally unveil plans in about six months. “It’s my absolute dream,” he said. “It goes beyond anything anyone’s seen from me, in terms of how far I can push the experience of architecture and new ideas of how to reach my customer.”

Perse holds out his arms and embraces an imaginary globe in front of him. “I finally have everything I want in here. We’ve created our world, and now it’s just about how much fun can you have with it.”