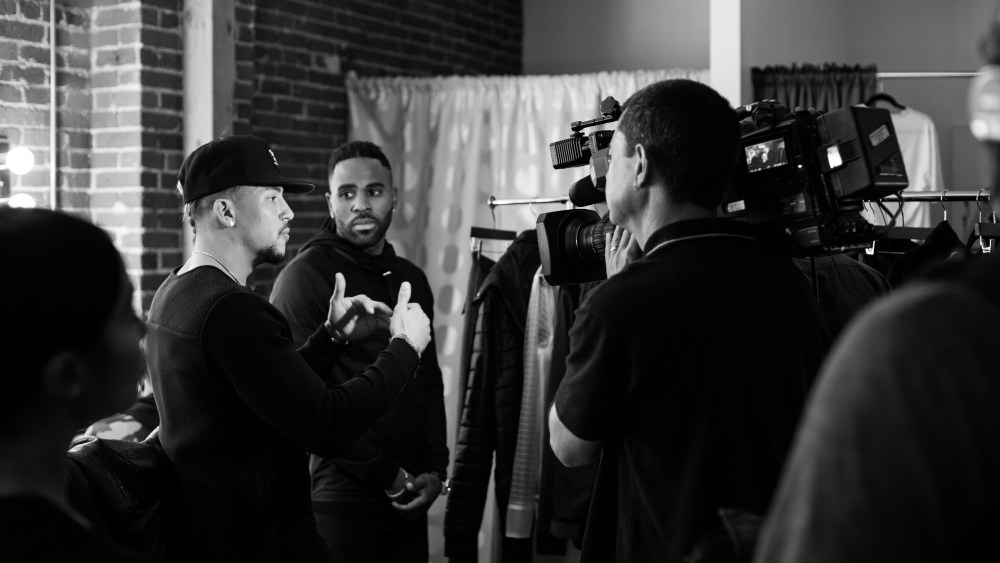 Jason Derulo walks the talk. Even though the singer is not doing one of his trademark backflips or dance routines at the moment, he’s ever mindful of keeping up his powerful physique, and his growing profile as a fashion trendsetter. He settles into a director’s chair to eat poached salmon and asparagus (which he has ordered for his small posse as well) at the glam station before the fall shoot for his and Antonio Brown’s LVL XIII label commences in Los Angeles.

“It’s crazy,” he said, of how the label he is growing with Atlanta-based designer Brown (he, his manager and Brown are all equity partners in the business) has grown from a sneaker line into a full-fledged fashion collection that will enter Bloomingdale’s this fall. “Everything just happened naturally. We didn’t force it or weren’t aiming toward anything at first. But we definitely had a vision for doing both shoes and clothing.”

Of how he and Brown collaborate together from different cities — Derulo is based in L.A. and Brown hops between Atlanta, New York and L.A. — he said, “Bouncing ideas off each other, being brutally honest. We don’t care about each other’s feelings.”

As he did at the WWD Menswear Summit, Brown pointed out that Derulo test drives all the pieces. “He is the product of the shoes he’s wearing here. We had an original model that had a white stripe going down the side, and Jason’s like, ‘I don’t like that. I want to see an all-black version.’”

“Exactly,” said Derulo. “It looked cool on the stand, but once you put it on with the outfit it took a little too much attention. Just things like that, being able to wear the clothing ourselves and act as the consumer.”

He and Brown are now friends, and their own best customer. “Jason and I are one in the same in the sense that we like nice things, we know how to go out and buy and what we expect when we do buy. Especially because we are putting our money into something. We want other people who buy luxury goods to appreciate everything about it: the details, the hardware, the fabric, where it’s sourced from and where it’s created,” said Brown.

The technical fabrics, knits and leathers are all sourced in Italy and the pieces are made in Europe and the U.S. retail prices range from $150 for a color-blocked T-shirt to $900 for a leather jacket that converts into a backpack, and footwear ranges up to $900.

For Derulo, fit is the number-one priority. “The way something fits is everything . When I’m on a shoot or a video it’s always, ‘Take it in here, change this here’ to the seamstress just to get the fit right, but if you can get something that’s just off the rack fitted perfectly, that is everything. It doesn’t happen often.”

When asked if every piece in LVL XIII has to pass the backflip test, he laughs, “Nah, I don’t just go throughout my day just dancing. But for specific things, of course. My outfit today I don’t intend on doing a street choreo,” he said of the woven navy shirt with black utilitarian straps and buckles and zip-off sleeves.

Noted Brown, “It looks really cool, but we have the green version that has more stretch material because we wanted to offer both to the consumer.”

As for the ombré raincoat Derulo wore in his latest video, “Swalla,” he said the synergy is “brilliant.” The video has reached 100 million views on You Tube in a month, his 11th video to surpass that mark.

He said every sartorial choice he makes is well-thought-out. “At this point, yeah. Early on I didn’t understand a lot of that, but as you mature as a man and an artist you learn a lot and this whole career has been a learning process. At this stage, every single thing I wear is important, not just in my videos but everyday life. Even if I’m going to the airport, what I’m wearing is important to me, so obviously for a video that will be viewed a billion times, I want everything to be perfect.”

His three million Instagram followers were quick to ask who made the raincoat. “I wanted to let them know it was LVL XIII,” he said of typing back. “I just can’t reply to all of them but if people have a similar question and they just get the answer from that.”

He continued, “Once you put something out into the world as serious as a video you get instant feedback on what you are wearing, how they like the song, how it makes them feel, what part of their day they are using it in. It allows you an insight into people’s lives and how what you put out into the world is affecting them.”

Brown notes that organic placements are what they are aiming for, even though part of what they are shooting today is for a Bloomingdale’s campaign.

“The consumer is becoming more consciously aware of what they are buying. They are used to seeing sponsored ads on Instagram; they know when they are being sold to, so that is even more reason we should be building this brand in an organic way like way Jason did in music video, because he just spoke to who our customer is.”

They don’t take being in a retailer like Bloomingdale’s for granted. “For me, availability is relative based on exclusivity. You can have a product that’s ‘available,’ meaning affordable enough and still being luxury, but you still limit the pieces and it remains exclusive. I think that’s the key to retail right now. Retail’s a dying brand and we have the opportunity to rebuild retail and bring the consumer back into retail with what we are doing.”

During the shoot, which also featured a few women’s pieces modeled by Brown’s brother and sister, Derulo let himself relax with a glass of white wine. “We’re really grateful to have this opportunity, and we’re having a great time.”