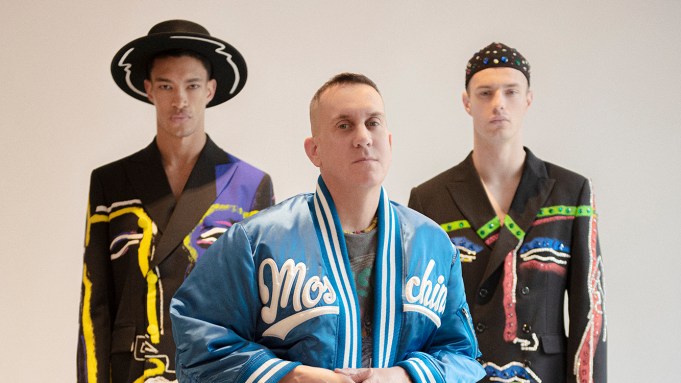 Jeremy Scott is doing his part to raise the profile of Tony Viramontes — and he’s doing it on a global scale during his first men’s-only show for Moschino during Milan Fashion Week.

Viramontes, a fashion illustrator and photographer from Los Angeles, who died of an AIDS-related illness at age 31 in 1988, had his work featured in high-profile magazines, on album covers and a couple of coffee-table books. But he’s never really gotten the recognition he deserves, Scott believes.

The designer aims to change that on Sunday when Viramontes’ work is showcased during Moschino’s spring show at Fonderia Macchi in Milan.

“Tony is a little bit of an unsung hero, because he’s not a household name,” Scott said. “But he had such an influence in pop culture because of his work.”

Scott pointed in particular to his illustration of Janet Jackson for her album “Control” from 1986, that he believes is “like a reckoning into fashion.” He pointed to friends who may not have been familiar with Viramontes but “they knew they needed that album.”

It was the same for Scott, who embraced the opportunity to work with Viramontes’ estate to obtain the rights to his images to star in his spring collection.

Scott reworked the “amazing graphics” from the late artist’s illustrations and emblazoned them on suits and other pieces while also “paying homage” to how Viramontes would draw on clothes and then photograph them. He pointed in particular to Viramontes’ work for The Face magazine on the Buffalo Boys, a key fashion movement of the 1980s.

It was a direct result of Scott “musing on” Viramontes and his delight with how the collection turned out that prompted him to let his men’s collection stand on its own this season.

“I have never really done a show that was only men’s — ever,” he said. “But I love the collection and I think that sometimes the women’s aspect can overshadow the men’s. And with this nice a collection, I thought it deserved its own complete moment, and to not be linked to a sister collection.”

Although oftentimes his collections for men and women have a similar theme and it makes sense to show them together, he described this one as “a stand-alone. There’s not a women’s resort collection that is tethered to it.”

And even though Viramontes illustrated plenty of women, it was his images of men that Scott found “so striking and inspiring, and I really wanted to capture that whole mood. The whole Buffalo Movement was really centered around men, so it just seemed right and I got swept up in the excitement and emotion.”

It will also allow Scott’s menswear its own showcase. “Sometimes I don’t know if people give my men’s the credit it’s due because they see the women’s and it kind of overshadows it,” he said. “So maybe this will give the men’s its own little moment in the spotlight.”

Scott described the “vibe of the collection” as “very Buffalo Boys” — playing with different textures and graphics and employing the “artistry of Tony’s hand and that kind of freeform expression that was really so singular to his illustrative work.”

With tailored clothing experiencing a strong comeback as the pandemic wanes, Scott embraced the category in the offering, but it’s certainly not your grandfather’s navy suit.

“There are lots of suits and jackets and exaggerated forms of the suit,” he said of his collection. He played with the proportions to ensure they worked with the “expression of all the graphics on there.”

“Everything I do is so instinctual,” he said. “It’s what I would want to wear and how I’d like to see my friends dress. I definitely don’t shy away from male sexuality and sexiness, because I think that’s important and I wouldn’t want to ignore that.

“The kind of things I design are bold by nature — they’re for people with bold personalities who have a strong sense of themselves. I definitely think it’s a mix of being tough and glam at the same time.”

So as he puts the finishing touches on the spring collection, will Scott continue to show his menswear solo going forward? Maybe, maybe not.

“I think it’s just going to depend,” he said. “I don’t want to really lock myself into anything because I feel like after what we’ve gone through and all these different ways we’ve used to express ourselves through film and live shows and video formats, and everything like that, I just want to do things that feel right for each collection and not feel locked into any kind of one formula or another.”