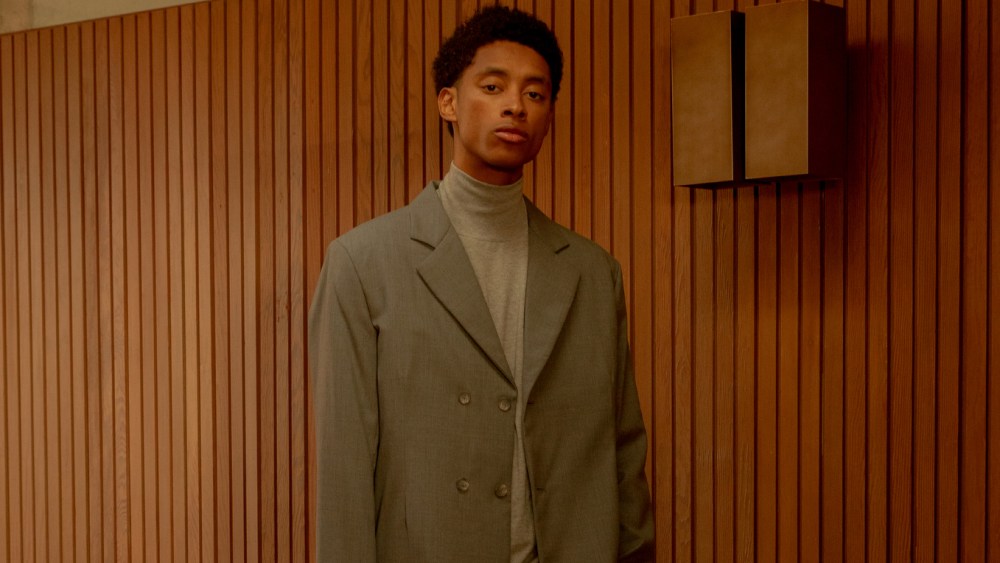 Coping with COVID-19 has taken different forms for different people. For John Elliott, it centered around the Dalai Lama.

While he was in lockdown, he kept hearing about people getting sick from the virus, the owner of a factory he used passed away, and he was fearful for himself and his family, including his one-year-old child.

But instead of spiraling down in despair, he chose another path.

“Around a year ago, still in isolation due to the pandemic, I began to explore what a new collection would look like,” Elliott explained. “At the time, all I had was a library of books and boards to pin on. I started with things that felt positive. The first was a large photo of the Dalai Lama. I’m not a Buddhist or particularly religious, but it felt hopeful.”

This quest to feel optimistic and in control also brought him back to a happier time in his life: the “adolescent curiosity” he felt during his high school years.

That sense of nostalgia is what Elliott drew on for his spring 2022 collection that will drop on Thursday. Called “Bright on the Inside,” the line of men’s and women’s wear is influenced by the late ’90s and early Aughts. “The collection’s name is meant to reference the modular system of dressing we’ve created, with the base layer being an investment in yourself. It was developed in the depths of the pandemic, at a time many of us were able to explore our interests and mental health in a deeper way,” he said.

The collection also marks the first time since it was launched in 2018 that Elliott has designed the women’s wear by himself without help from a design team. In the past, he would oversee the women’s, but the heavy lifting was done by another team.

“I call it my graduation,” he said with a laugh. “This girl is younger and more confident and has the ability to be sexy.” There are lots of cropped tops, low-rise boot-cut cargos and dresses with cutouts that would make Christina Aguilera and Britney Spears feel right at home.

“The new direction is inspired by the girls I was in love with as I came of age, how they dressed and the styling cues that defined that era,” he said. “There are codes embedded that harken back to my formative years — that time from adolescence through my early 20s.”

A favorite women’s look, he said, is low-rise oversize military-green cargos with articulated bucket pockets that he paired with a tank top and cropped puffer. “It feels like an era, but it’s also quite fresh,” he said.

In true Elliott fashion, the designer used the 10 years of experience he has developed in fabric development and manufacturing to elevate both the women’s and the men’s wear and said this collection will be the “prologue of what will be released over the next few seasons.”

Although he has built a well-established men’s business over the past decade, his goal is to “take this guy and gently move him along.” Although the men’s offering will still be “fabric oriented,” it will now center around a “smarter way of dressing. I felt like this was a big risk, but extremely necessary,” he explained. More tailored looks will be a centerpiece of this evolution — albeit in a way that fits into the John Elliott aesthetic. An example is a double-breasted suit with a cropped jacket, a slouchy topcoat with drop shoulders and a crinkle finish on a tropical wool vest.

“It’s more formal but still feels very John Elliott,” he said. “I want this to be seen as a young, American house — that’s the master plan for this collection.”

Some allusions to the season’s name are literal, Elliott explained. “Burnout terry has two tones, with faded away middle layers that reveal a pop color inside. Some ideas are more abstract. Through dipping our toes into tailoring, we’re exploring the relationship between formal and casual. Our designs step out with new styling and confidence, because we had time to work on ourselves.”

To introduce the collection to his customers, Elliott shot the campaign and look book in iconic homes around his hometown of L.A. “This campaign, photographed by Drew Vickers and styled by Carlos Nazario at a John Lautner-designed home, is the first in a series of three shoots at significant places in the Los Angeles area with design principals that inspire us through perspective, light and intention,” Elliott explained. They also used Craig Ellwood’s Case Study 16, that was designed in 1953. “The curiosities referenced in those locations are rooted in principals that are Brutalist or came out of the Bauhaus movement. Many of these themes were actualized by great Mid-Century architectural masters,” he said.

The collection will be released slowly over the next four months with weekly drops planned. The campaign will be used in print — a first for the brand — as well as in outdoor advertising and in Elliott’s three stores in L.A., Miami and New York.

Since opening his 2,700-square-foot store in SoHo in September, the store has become the number-one revenue producer for the company, Elliott said. Top sellers include outerwear and leather, a real boost for the designer, who admitted these pieces are the ones he likes to work on the most. He also cited demand for “novelty and knits. French terry, denim and jersey are our core, but people are liking the creativity and craftsmanship,” he said.

Although Elliott has no plans to immediately return to the runway to show his collection, he does admit that after 10 years of holding shows, he misses the catwalk.

“We’re exploring to see what suits the brand,” he said. “This time we’re doing see now, buy now with a high-powered lookbook and campaign. But there’s nothing like the rush of a runway. I still love shows, they’re powerful and exciting.”