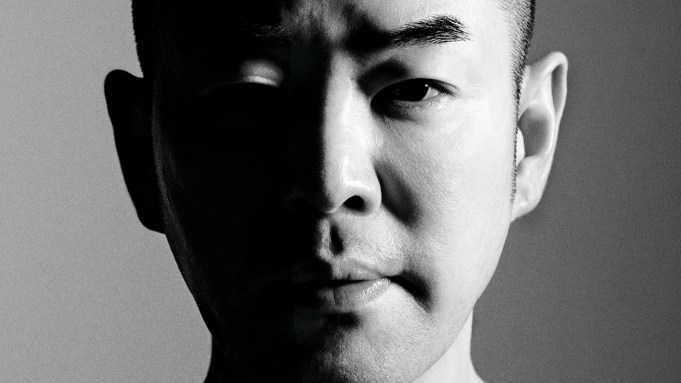 Juun.J is not exactly comfortable in the spotlight. But that’s just where he’ll be later this month when he’s showcased as the featured designer at Pitti Uomo. This marks the first time a Korean designer has been selected for the honor and puts Juun.J in an esteemed group that includes Thom Browne, Raf Simons and Jeremy Scott.

While his brand may not be well-known in the U.S. just yet, the organizers of the Florence trade fair selected him for his creative approach to men’s wear, one that “skillfully blends Asian roots and heritage tailoring, rigid silhouettes and futuristic volumes, along with military influences and Parisian cosmopolitanism.”

Juun.J, pronounced “June Gee,” graduated from the Esmod Seoul fashion school in 1992 and subsequently worked at several fashion companies, including Korea’s Nix and Club Monaco Korea, where he says he learned a “precious lesson to balance artistic inventiveness and commercialism.”

He applied those lessons to “Lone Costume,” a collection he launched in 1999. Not long after showing at Seoul Fashion Week, Lone Costume achieved a cult following and Asia Times selected Juun.J as one of its four designers to watch.

In 2007, Juun.J began his international career by boldly choosing to launch his first collection under his own name in Paris. That collection also met with significant acclaim and became a staple of Korean celebrities such as G-Dragon from Big Bang, which helped popularize his looks in Asia.

“K-pop artists and fashion designers cannot be separated,” said the designer about his close connections with Korean pop stars. “Musicians are also artists [like designers].”

The brand steadily built up a following, both in Asia and in the West. In 2008, he was the foreign guest designer at Hellenic Fashion Week and the Modny Desant Festival, while in 2010 he took part in both the Seoul and Barcelona Fashion Weeks and was one of the finalists for the Swiss Textiles Award.

Over the years, Juun.J has also collaborated with several brands including Adidas, New Era and Reebok, injecting his street vibe into these established collections.

In 2012, Juun.J was acquired by Cheil Industries, the fashion division of Samsung Group, which in Korea runs a variety of businesses beyond electronics and technology. His collections are now available in 15 countries.

But Juun.J has remained low-key throughout the years. The media-shy designer gave WWD a glimpse into the behind-the-scenes preparations for his Pitti Uomo debut, sitting down for an interview in his office at the headquarters in Cheongdam-dong, Seoul’s fashion and luxury district. Dressed in all black, sporting his signature close-cropped hairstyle and black-framed glasses, Juun.J said he has been working on the 35- to 40-piece collection since his selection as guest designer was revealed in late October.

“Pitti Uomo is the center of men’s fashion, so as a men’s wear designer — to be able to show there is an amazing opportunity,” he said.

He admitted he felt some pressure and nerves, but is eager to show what he can do.

“Every time I try to create a new collection, it feels like it might be impossible to come up with a new concept,” he said. “But once I reach my creative limit — and it’s difficult to get there — it somehow becomes possible to cross this boundary [and create something new].”

He said his inspiration, not surprisingly, comes from “examining people on the streets.”

Street fashion has a very “avant-garde side,” he added, so the “fashion leaders of the streets are regulars for my search. Sometimes people on the streets are much cooler than models on the runways.”

“Seniors with very antique, old clothes or servicemen with uniforms can also be my inspiration,” he explained.

Acknowledging that he “truly loves…reinterpreting and re-creating” these looks, Juun.J applies his ideas to classic items such as anoraks, MA-1 and N-2 jackets and denim, creating patterns with tailoring techniques that are “transformed into perfect Juun.J items with new silhouettes, materials and details.”

For eight years, this has translated into reinterpreted trenchcoats, oversize bomber jackets and bulky yet tailored suits — looks Juun.J has termed “a diversion of classics” on the runway. “For every collection, I choose classic items, I reinterpret them and make them into completely new, novel items — new versions of themselves,” he said.

For example, “jogging pants began as workout wear,” he said. “But through my tailoring and well-cut shapes, they have become a sophisticated item of clothing.”

Other signatures are his loose shapes and oversize silhouettes. “When I launched my collection in Paris, I employed a lot of oversize volume. At that time, it may have been a little awkward for other customers, but now more and more brands are starting to do oversize silhouettes and volumes.”

Juun.J believes that men’s wear trends in Asia are firmly based in oversize looks rather than the tight, shrunken styles still popular in the West. “Many brands are showing [more volume] now and people are getting used to it, so they begin to understand that these clothes are not too big. [In particular] I’ve started to see more Asian men wear oversize clothing in Hong Kong, Japan and China.”

But he feels that having a specific point of view as a designer can be limiting in some ways.

“[Perhaps] for designers and creators who don’t have a definite brand identity, it’s easier to create new collections because they have so many different ideas [they can go with]. But for someone who has a definite idea of their brand, who knows what they want to do, it’s more limiting and it’s definitely harder.”

And while he believes “performance, stage production and details are very important aspects of a fashion show, I am deeply focused on each look of the collection.”

Juun.J also revealed that at Pitti, he will be creating “a special collaboration to present special pieces with [famed Japanese illustrator] Hajime Sorayama, my hero from my fine arts college years. It is extremely inspiring and I am looking forward to it myself.”