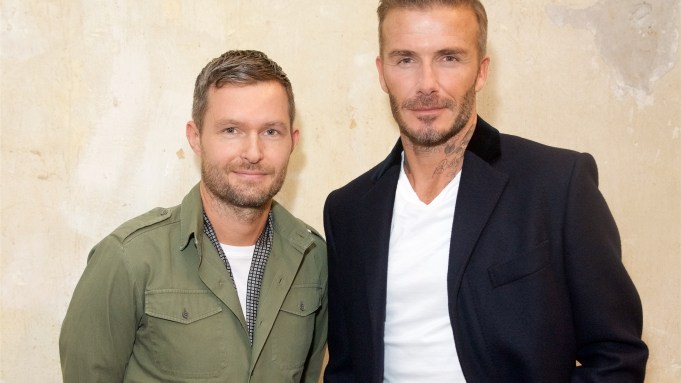 LONDON — The new-generation Kent & Curwen collection will make its retail debut in November and no one is more enthusiastic than David Beckham, who’s not only invested the brand but is more than happy to front it too.

“Because I’m part owner, we were trying to think how not to put me in the campaign — it was something we discussed. But I do feel very passionate about it and have been very involved from Day One, so the ad campaign is exciting for me,” said Beckham, whose company Seven Global has a business partnership with the Trinity Group-owned Kent & Curwen.

Although the campaign has yet to be shot, the collection will make its debut in November exclusively on the Mr Porter web site. Later that month, it will be sold on the Kent & Curwen site, with a full wholesale rollout set for early next year.

The British brand was founded in 1926 and has its roots in the manufacture of sports uniforms for clubs, colleges and universities. Kent & Curwen pioneered the cricket sweater and its archives are packed with regatta jackets, old Eton caps, V-neck knits and sturdy topcoats.

The brand has evolved into a traditional men’s sportswear collection with a $100 million business based mostly in the Far East. With new investment from Trinity Group — and Beckham’s support and inspiration — it’s aiming to put a younger, laid-back spin on the archive’s sporty classics and speak to a wider audience.

The latest, seasonless collection has been designed by new creative director Daniel Kearns — a veteran of Louis Vuitton, Alexander McQueen and Façonnable — with the company’s sporty DNA as well as Beckham’s style and aesthetic in mind.

It’s packed with laid-back styles that feel like heirlooms from one very cool older brother or father — someone who rowed at Cambridge, batted for Eton or stalked deer with his pals.

Kearns has done some clever distressing and staining of garments, giving them a vintage feel and an appealing, unpolished preppiness. During an interview alongside Beckham, Kearns said his aim was to embrace Kent & Curwen’s British sporting heritage and spin it into a collection for today — lighter, slimmer, softer and easier.

“We want to answer to an e-commerce, global, social media generation that blends brands and price points, not someone who’s looking for the latest fashion fix,” said Kearns.

“This should be affordable, aspirational clothing. I think the idea of a new generation lifestyle brand is important — a British one that the new generation can feel akin to. That’s really something we want to re-embrace because so much of the heritage going into this makes sense in terms of the idea of lifestyle, from sportswear to tailoring.”

The collection includes outerwear, such as a military greatcoat done either in wool or unlined cotton; a heavy cotton lumberjack jacket with a shearling collar, and piles of blazers in wool or cotton, some with a subtle regatta stripe sewn on the inside of the lapels.

Rugby shirts with skinny stripes and the brand’s triple-lion logo have faded, slightly yellowed collars — as if they have been in constant use since, maybe, the Sixties — while white T-shirts, including the one Beckham is wearing during the interview, are slightly distressed around the neck, as if they’d gone through many a washing cycle.

The effect is charming, not cheap.

Beckham said some of his favorite pieces include the rugby shirts and the sweaters with the English rose logo — it’s discreet and often appears around the bottom hem of tops — and pointed to an off-white rugby shirt hanging in a showroom Savile Row.

“That underneath a tailored overcoat would look so cool. It works,” he said, adding that he is adamant the collection should not be about age.

“It’s the casual elegance which is important for the brand and the line. This could be for a young generation — I took some pieces home the other day and Brooklyn [his son] saw them and said, ‘Where are these from? I want to wear them!’

“He’s 17 years old. I’m 41. There’s no age group we’re trying to hit. Any younger or older guy who wants to feel elegant is our target. The inspiration as well has come from my taste, but also from the people I’m around. I have a lot of friends, and I think a lot of the influence comes from my biker friends, my sporting friends, my older generation of friends who maybe go to the country to go shooting,” said Beckham.

Asked whether the family’s dinner conversation now revolves around clothing, what with his wife Victoria Beckham’s fashion collections and his collaborations — past and present — with Adidas, Belstaff, Hennes & Mauritz (his latest advertising campaign with Kevin Hart was teased Thursday) and Giorgio Armani, the global sports icon said not too much.

“Victoria talks me through her collection and I talk her through what we’re doing as well, but the lucky thing is that I’ve been able to learn from Victoria with her work ethic,” said Beckham.

“Obviously this is a totally different script to what she does because we have an established brand and Victoria started from scratch. My history in the fashion business has been very different as well. I’ve been very lucky over the years to have worked with Adidas, with Belstaff and H&M. I’ve also worked with Mr. Armani with underwear too. Seeing the way the fashion world works, I have a lot of ideas and I know where I want to take a business and that’s what I hope to achieve.”

He said his goal for the brand is to build, build, build and even expand more in Asia, where Kent & Curwen already has more than 100 stores, and he has a solid fan base. Although it’s still early days, Beckham said a flagship store is on the cards.

“It’s a huge business in Asia, and we want to continue to keep that and raise it to another level. We want to keep what we have in Asia strong, but also establish the roots here where Kent & Curwen first started. That’s important for us,” said Beckham.