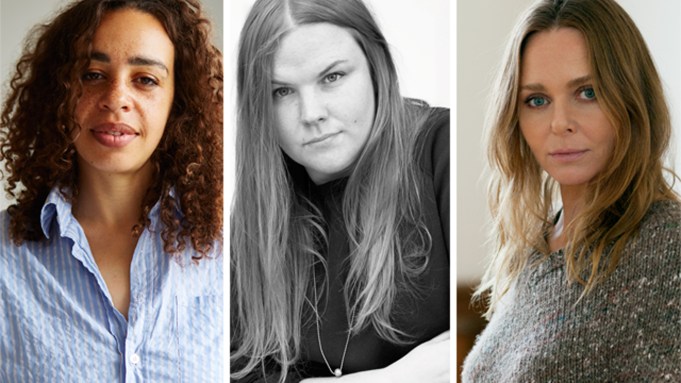 “Women’s is more or less the same collection, to be honest. We added probably 30 percent — and then we just restyled the men’s,” said the Danish designer who graduated from The Royal College of Art in 2010 and launched her women’s offer for spring 2017.

The move was natural for Andersen, who’s never made much of a distinction between “male” and “female” clothing. She said fabric research remains her main inspiration at the start of every season, and she doesn’t see anything as gender-specific.

“For me, a fabric is a fabric. Even as a woman, I don’t really wear lace. It always makes me feel somewhat uncomfortable. But when we do it for men, it’s much more interesting and attractive — in a different way.”

She’s always worked with a lot of lace and silk. “For me, it has never been about gender bending. I don’t think our generation has that approach,” she said.

Martine Rose could argue the same: She pops a few women’s looks on her men’s runway — and sometimes styles her men with feminine touches. Then she lets retailers, such as Matchesfashion.com, decide how they want to buy the collection.

Stella McCartney may draw more of a distinction between her men’s and women’s collections, but the inspiration always springs from the same place.

“I’m trying to be mindful. I want to solve wardrobe problems. I work for you, the customer, and I’m happy to do that,” McCartney said.

Andersen, Rose and McCartney were three of the brightest stars at London Fashion Week Men’s in June. Their varying degrees of gender agnosticism and mix of tailoring, street and athletic-inspired clothing is not only driving sales, but challenging the way Millennial men dress.

“How often does a man really have to wear a suit anymore? How can it be more playful?” asked McCartney during an interview. The designer said she’s been using her Savile Row training to change perceptions about the suit.

“We’re presenting a new way to have a suit in your wardrobe, to break it apart and get more out of it. That’s what we’re trying to do, give people more accessibility in their wardrobe.”

She’s also been crossing into feminine territory, using the bohemian silhouettes of the Sixties and Seventies — and Beatles-era wardrobe pieces — to diversify her offer.

McCartney said her father used to wear a fancy embroidered tunic, which became a family fashion heirloom and fodder for her fashion label.

“We did it in women’s wear first…and we thought it was a blouse of my mum’s, and then we saw a picture of my dad in it and we went, ‘Oh my God, it’s Dad’s.’”

For spring 2018 she drew inspiration from George Harrison’s closet, including a jacket and a pair of boots, while many of the other pieces, including the oversize logo knits, camel and fuzzy caramel coats, could easily be worn by men or women.

McCartney wouldn’t reveal much about her next collection except to say that her man is still “having a wonderful sort of conversation and dialogue with the woman of Stella McCartney.”

Although women’s wear will always remain at the core of the Stella McCartney business, the company has every intention of growing men’s wear.

“It’s a component we have high hopes for,” said Frederick Lukoff, chief executive officer of Stella McCartney. “We are approaching the growth of men’s in an organic way, and we will pursue it as far as we can. I’m not putting any cap on it in. We’ve seen growth every season so far, although it’s still early days.” That said, Harrods earlier this week said it opened the first-ever Stella McCartney men’s boutique within the advanced designer area of its London flagship that includes eight exclusive styles.

Andersen is aligned with McCartney in so many ways, and especially when it comes to rethinking the traditional suit.

Men’s wear, she said, “is no longer about suits. It’s really about tracksuits and hip-hop. There’s a whole generation of people who understand that it’s not just about a trend, but about a lifestyle. For us, the tracksuit is not a statement for a Sunday afternoon; it’s part of the wardrobe.”

She said she’s proud her collections have gained traction over the years.

“In the beginning — five or six years ago — it was very much a Japanese/Korean customer who understood what I was doing. Los Angeles understood as well because people there really want to feel comfortable — but they also really want to stand out. Now, I think we’re really catering to a new generation,” said the designer who counts Matchesfashion.com, Selfridges, Colette, I.T, La Rinascente and Galeries Lafayette among her stockists.

SEE ALSO: Streetwear Has No Frontier >>

Martine Rose’s men’s business is also in growth mode as she does her part to get men thinking differently.

The designer now has 87 doors worldwide, including Browns, Machine-A and Dover Street Market, with new additions this season, including Beams International Gallery in Tokyo; 10 Corso Como in Milan and The Webster, Miami. Matchesfashion.com is buying Rose as a women’s collection.

The 36-year-old designer, who is also a consultant for Balenciaga men’s wear, and who was shortlisted for this year’s LVMH Prize, said her dream is to “keep something quite special and cultish” about her collections.

She regularly subverts male stereotypes, plays with proportion and reworks unusual fabrics. She’s also been collaborating with Napapijri and has worked with Nike on the footwear for her fall collection, where she selected pieces from the brand’s archives.

Rose’s signature shines through in pieces such as a revamped MA1 bomber jacket or oversize denim jeans.

“I think I mesh things together in the collection that makes everything feel slightly odd,” Rose said. “But there’s sort of an odd coherence to the collection, and I think that’s what people like because they find elements of surprise in it.”

Women have no problems wearing the clothes, and for spring 2018 she injected a few specific women’s wear pieces, such as a khaki knee-length pencil skirt with a triple-decker waistline and a blue striped button-down blouse.

Suzanne Pendlebury, buying manager at Matchesfashion.com, said Rose “has tapped perfectly into a mood of the moment, but it doesn’t feel like a passing trend. The brand has longevity. It is appealing to both men and women and has a strong sense of style.”

She said the cut on Rose’s garments is key. “What may look like a basic shirt or sweatshirt is cut in a certain way to change the proportions and add that fashion twist. That attention to detail and fit make the pieces feel new: Jeans are super wide while play on proportion feels so right. There is a real buzz around her, and we are proud to be representing her.”