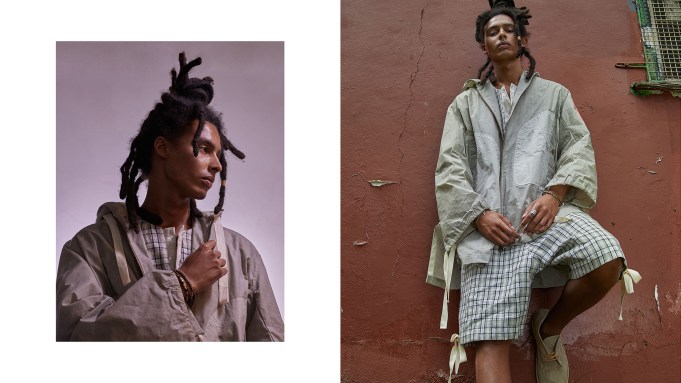 The duo met in college. Wilkins studied knitwear at Central Saint Martins and graduated in 2005, then moved on to study men’s wear at the Royal College of Art. He completed the program in 2009. Champion took a more varied route, going from studying biology to environmental public relations and photography. He ended up in fashion, graduating from Imperial College London. They have worked for labels including Alexander McQueen, Ermenegildo Zegna, Matthew Williamson, Halston and Mark Fast. The designers, who produce their collections between London and Bali, were selected by Yohji Yamamoto as finalists for the Hyères award in 2012.

Wilkins said their man is someone who “has an appreciation for subversion.” Champion added: “A little irreverence never did anyone any harm.

“We believe in challenging the relationship between utility and luxury,” Champion said. “We’re interested in the modern masculine aesthetic, and create innovative textiles and engineered knitwear for utilitarian silhouettes.”

Wilkins said the due is “always looking to challenge mediocrity. Everyone’s approach to design is unique, the collections reflect our interests. Our process is complicated, but the message is simple.”

This season the duo will present a collection that focuses on protests, a blend of “flower power-meets-militant activism” and “unlikely symbols of resistance.”

Prices range from 90 pounds, or $116, for a woven ikat T-shirt to a double-faced felt overcoat at 1,200 pounds, or $1,554. Bodybound is sold at Yife in Shanghai, SKP in Beijing and Maison Simons in Canada.

Born in the English Midlands, Nicholas Daley graduated from Central Saint Martins in 2013 and studied for his bachelor’s in men’s wear before launching his label in 2015.

Daley interned at a number of brands including Hardy Amies, Paul Smith and Aitor Throup before working as a pattern-cutter in production at Nigel Cabourn. With his studio based in North London, Daley produces his collections within the U.K.

Daley said his man is one “who appreciates heritage and craft, but with a contemporary direction” and described his aesthetic as authentic, British and multicultural.

“As a men’s wear designer, I felt it was integral to have experienced time on Savile Row,” Daley said. “It should be respected, cherished and celebrated by all designers. I spent time learning from the master tailors on how to cut and construct tailored garments and learned more about the history of all the Savile Row houses, which was a fascinating experience.

“Although my work touches on some aspects of tailoring, it was more the craftsmanship that I have continued to incorporate into my work,” he added. “Whether it is the hand-knitted items that I produce in Leicestershire, the handmade kilts from Scotland or the bespoke woven wools from Yorkshire, it is continuing to integrate British craftsmanship into contemporary items for today’s consumer.”

For his upcoming collection, Daley said he is continuing to explore his British heritage. “I will be looking at specific textiles that have a huge amount of historical content. Researching heavily always unearths some intriguing finds, both on a personal and professional level.”

Prices range from 80 pounds, or $103, for a classic organic cotton jersey shirt to 1,800 pounds, or $2,331, for a rubberized cotton coat. His collection is sold at Dover Street Market in London, The Bureau Belfast in Northern Ireland and Public in Japan.

Born and raised in Seoul, Kang Dong Jun launched D.Gnak in 2006. He has worked for tailoring brands such as Bonmax and Michelangelo in South Korea as part of the sample team to learn the garment-making process.

Jun graduated from New York’s The New School’s Parsons School of Design in 2005 with a BFA in fashion design and then attended KDI Graduate School of Public Policy and Management in South Korea, where he received his MBA in 2006. He began showing his men’s wear during Seoul Fashion Week in 2008 and has since shown during the men’s fashion weeks in Kuala Lumpur, Malaysia; Singapore; Seoul, and Milan.

He said his man “is not self-conscious, pursues his own individuality and satisfaction, and knows how to enjoy life,” and describes his look as “tailoring-based.” The men’s wear brand is known for his fusion of Western tailoring with an oversize Korean fit, done in a black-and-white palette with twisted details and muscular draping.

His prices range from $170 for a T-shirt to $1,500 for a leather jacket. The brand is sold in more than 60 stockists including Neiman Marcus, Antonioli in Italy and I.T in Hong Kong.

A textile design consultant, West Yorkshire-born Edward Crutchley has worked with Pringle of Scotland, Kanye West and currently collaborates with Louis Vuitton creative director Kim Jones. Crutchley unveiled his first stand-alone men’s wear presentation, which was hosted by Jones last year. For his upcoming range, the designer will be showing a unisex collection to appeal to both men and women.

“My customer — male or female — is someone who appreciates quality and exclusivity,” Crutchley said, “someone who isn’t afraid of a strong statement, but wants to make that in a way that says luxury rather than shouts fashion.”

He decided to embark on women’s wear earlier this year. “I had been selling to some women’s stores for the last couple of seasons and when I saw what these stores pulled for their buy it was a really interesting selection,” Crutchley said. “That made me think about who this customer could be, and how I’d like to see them dress.

“Although stores hadn’t requested specific women’s styles, I do think there is a lot of potential for growth within the women’s wear market for my type of products,” he added. “I’ve also really enjoyed bringing women’s elements into my men’s wear and I want to see that grow, and I want to show this on both men and women. I think it’s going to be very interesting to see how the type of loose and relaxed shapes look on different body shapes.”

Crutchley said that for this upcoming range he hopes to achieve a more than 50 percent sell-through for spring 2017 and hinted there will be a few surprises to come.

“I’ve really taken off the brakes. We are going to be sending out some incredible new volumes and combinations of all of these references that I love,” Crutchley said. “Previously we’ve always tried to balance the more forward pieces with what we think is going to be more commercially successful. But it’s always the very strong pieces that sell best. So we’ve made a collection jammed full of pattern and texture and strong shapes.”

For the spring 2018 collection, he was interested in the placement of width and volume. “I’ve been looking at a lot of historical references and how width was used in different eras to express different ideas,” Crutchley said. “I’ve expanded on my range of prints this season, so I’m really building on and developing the very patterned hand from the last two seasons.”

A print aficionado, Crutchley said his prints are exclusive and printed in Como, Italy. The designer has been experimenting with some new fabrics to help develop this season’s silhouettes, such as a viscose that has a rounded drape; a woven golden Lurex poplin; a floral silk jacquard, and a technical looped Lurex base.

“I think for spring 2018, we are going to see a lot of metallics and interesting shines and opalescent coloring,” Crutchley said. “It’s definitely a strong look but something I’ve really enjoyed.”