London Men’s: Ones to Watch

A crop of new and noteworthy designers creating some buzz on the men’s fashion scene. 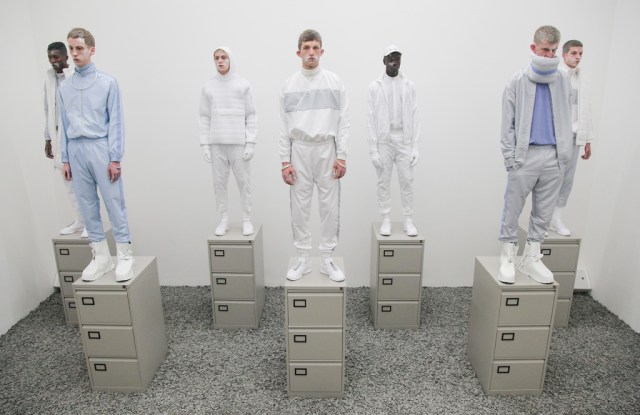 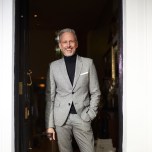 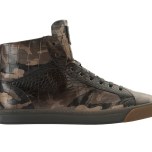 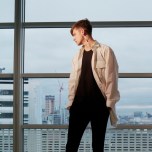 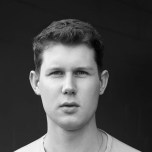 London-based designers Ben Cottrell and Matthew Dainty met at University of the West of England and started Cottweiler in 2012. Named after a cross between Ben’s surname and Matthew’s mother’s maiden name, the brand has grown organically since then as a result of ongoing collaborations.

Overall, the collection is inspired by cult groups and enthusiasts. “Skinheads, prison culture, religious groups such as the Heavens Gate cult, boy racers and sportswear fetishists have all had a big influence on our work. We are fascinated about how these groups create a sense of identity and belonging,” Dainty said.

For their first presentation, expect a mix of exotic fabrics.

“We have been developing some really interesting fabrics that mix natural and synthetic yarns with a strong focus on sheer, lightweight and textured finishes,” Dainty said.

“Masculinity and its definitions are constantly on my mind when designing,” said 26-year-old Sebastiaan Pieter. “From that flows thoughts of function and occasion. It allows me to be creative yet retain a matter of purpose to the garment.”

The Netherlands-born designer cites the use of “exceptional and surprising fabrications” as a key element within his Pieter collection.

It’s been seven years since footwear designer Patrick Cox left his brand, but he’s making a return for spring with Lathbridge.

The self-financed brand from the Canadian-born Cox, who has designed shoes for Vivienne Westwood, Anna Sui, Richard James, Lanvin and John Galliano, and who has been creative director of Charles Jourdan, is uniquely personal.

Lathbridge is his middle name and its logo is a stylized bulldog “representing my two adorable English bulldogs Caesar and Brutus.”

The brand seeks to bridge the gap between “high fashion and heritage,” Cox said. “My sneakers are not all blinged-out but rather have an old school, Seventies feel.” The line also offers fun footwear such as floral running shoes, camouflage loafers and butterfly brogues.

The collection ranges in price from 225 pounds, or $343 at current exchange, for the Boogie sneaker, to 375 pounds, or $572, for the Flashback boot and will be available at Harrods, Selfridges and Luisa Via Roma.

“I wanted to create a name that encapsulated a rotating transmission,” said designer Graeme Gaughan of his Tourne de Transmission collection. “It’s a poor French translation but I liked it and it stuck.”

Gaughan said the design process for the collection started with manipulating prints and has widened to include “ethnic dress codes and fusing these silhouettes with Western styles. I have been researching a South American tribe called The Kogi. Their philosophies, dress codes, etc. Their use of layering and silhouettes are awesome.”