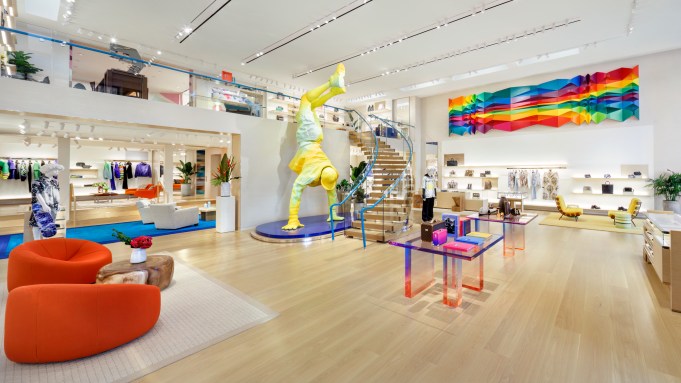 The vibe is definitely Southern California.

The new stand-alone Louis Vuitton men’s store has a colorful display of art with California tones all around the two-story location at 420 N. Rodeo Drive, which opens Saturday.

Walk inside, past the oversize display windows, and there is an airy feeling with 17-foot ceilings that stretch up to the second-floor mezzanine.

On the first floor, one wall is covered with a three-dimensional acrylic painting on stainless steel and mirrors by Portuguese artist Marisa Ferreira, who is known for her geometric forms and idiosyncratic colors.

In the center of the floor, near a winding stairway with blue leather handrails, is a bright yellow “Giant Man” sculpture depicting Louis Vuitton model Ottawa Kwami, originally from Ghana, standing on his hands. The sculpture is a piece by Virgil Abloh, the Louis Vuitton men’s artistic director who passed away from cancer last November at the age of 41.

Upstairs in the VIP room, with its off-white couches and chairs, are bright murals that Vuitton commissioned from artist Alex Proba, whose abstract designs use mid-century motifs that are desert-inspired.

In front of the VIP room is a playful space with a bright blue foosball table near a personalization table where patrons can have their initials embossed on leather items with the help of a hand-stamping machine.

The men’s merchandise encompasses a wide range of categories. The store carries an ample selection from the men’s fall 2022 collection designed by the late Abloh, who worked with the fashion house since 2018. He created his last collection using the theme of Boyhood ideology, seeing the world through the eyes of a child. There are tapestry looks and touches of streetwear as well as more traditional looks.

Footwear includes sparkly, colorful athletic shoes as well as traditional takes on shoes. There are plenty of backpacks, satchels, trunks and suitcases.

The Tambour watch, celebrating its 20th anniversary, is well represented in numerous styles as well as other watch pieces. And a full fragrance counter offers custom engraving on the colognes developed by Louis Vuitton’s perfumer Jacques Cavallier-Belletrud.

The new dedicated men’s store, occupying a space once occupied by The House of Bijan, is two blocks away from the three-story Louis Vuitton store that used to house both women’s and men’s merchandise at 295 N. Rodeo Drive.

This is Louis Vuitton’s eighth freestanding men’s store in the United States. Last year, Louis Vuitton opened men’s stand-alone locations at The Galleria in Houston and the Miami Design District. There are also three stand-alone men’s stores in Las Vegas, one in New York and another in Orlando, Florida.