Mahershala Ali Takes on the Topic of Masculinity at Zegna Event

The Academy Award-winning actor is the face of the luxury brand's fall advertising campaign.

Mahershai Ali and Alessandro Sartori at the What Makes a Man launch event in New York.

Ermenegildo Zegna is not afraid of taking on complicated subjects, whether that’s conservation, sustainability or education. And now, the 109-year-old company has turned its attention to defining modern masculinity.

On Thursday night, the Italian luxury brand borrowed a private Upper East Side townhouse to unveil its new communication campaign, What Makes a Man. The ads and videos that ask that question, in hopes of starting a thought-provoking dialogue, feature “Green Book” actor Mahershala Ali. At the event, the Oscar-winning actor sat down with Zegna’s artistic director Alessandro Sartori for a chat to take on the subject.

The conversation was supposed to be moderated by Reddit cofounder Alexis Ohanian, but he was at the U.S. Open watching his wife Serena Williams win her semifinal match.

But the two men managed just fine without him. They started out by reminiscing about how they met three years ago at an event in L.A. when Ali came into the Zegna store for a custom wardrobe. Sartori said he was impressed with how elegant the actor was and how much he knew about fabric, construction and fashion.

Ali said he’d had an interest in fashion since he was a child and one of his earliest memories was “learning how to match” an outfit and then “break it up” in order to make an impression. He recalled that in 1993, his father took him to Barneys New York to buy him one piece of clothing for his back-to-school wardrobe. “The price tags were crazy,” he said, but he chose a “beautiful button-up sweater” that he still owns to this day. Initially disappointed that he was only able to get one item, he said it taught him a life lesson — to value quality over quantity and create a closet of pieces that could be mixed and matched.

Sartori said this started him thinking about how people — and men in particular — choose their wardrobes to reflect their personalities. This led the brand to set out to, “not define what a modern man is, but open a conversation” about the topic. And he turned to Ali to front the campaign. 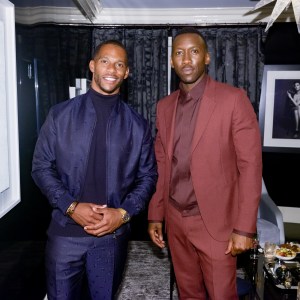 For Ali, he it was a “no-brainer” for him to sign on as the face of Zegna’s new “manifesto.”

“It wasn’t something I paused about because it’s inherent in my work as an actor,” he said. “If you have any kind of aspirations to be a transformational actor, [you need to embrace] diversity and breadth and scope in your choices” — the same characteristics that define masculinity.

Ali said that in the past, he could “literally be thrown off by my outfit” if he didn’t feel he was dressed appropriately for an occasion, “and that would inform my experience.” But once he started wearing Zegna, he said he was “comfortable and more confident” because the brand provided him “some semblance of peace walking out of the house.”

He said that while it’s easier to just wear a great suit, sometimes it’s necessary to step out of that comfort zone, whether it’s on a personal or professional basis. Ali said that when he played a lobbyist on “House of Cards,” his character was in a suit for the first three seasons. But in the fourth year, he no was longer a lobbyist and so had to switch up his wardrobe to present himself “in his daily life — that is the more difficult thing.”

But it also goes with the territory for an actor.

“This larger mission statement is very natural to actors, it’s not anything revolutionary,” he said. “From the beginning of time, we have to step into the shoes of other people and if you want a broad, diverse experience you have to try to capture that.”

When playing Dr. Donald Shirley in “Green Book,” he said he not only had to physically transform himself by losing weight, but also use his mind to become his character.

“It’s easy to pick up 20 pounds or lose 20 pounds, but what’s hard is understanding the psychology and ambitions of the character,” he said.

Ali said that he most admires actors who can “disappear” into a role, pointing to Daniel Day Lewis or the late Philip Seymour Hoffman. “The work I desire to do is to literally step into the shoes of another life. It’s my responsibility to listen and observe and appreciate and have empathy for all walks of life.” As a result, he said he wouldn’t even try to define what masculinity is. “People are so different and that’s what’s so exciting to me.”

However, Sartori took a stab at defining masculinity — at least as it related to himself personally. “As far as myself, it means I can show my fragility and my love for things I do without fear,” he said. 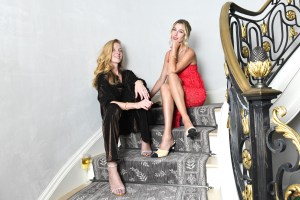 In addition to Ali, the evening drew celebrity guests including Victor Cruz, Irina Shayk, Fabien Baron, Robert Verdi and Michael Avedon, who were treated to a dinner prepared by chef Mario Carbone and specialty cocktails from Ferrari Spumante.

The What Makes a Man campaign also features singer and actor Nicholas Tse. The campaign was teased last week and will also appear in traditional channels such as billboards, taxis and print.