The London showcase for emerging men's talent will stage its spring 2016 show on June 12. 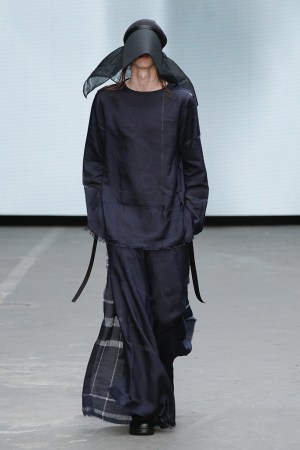 LONDON — MAN, the showcase for emerging London men’s designers, is set to celebrate its tenth anniversary with its spring 2016 show at London Collections: Men on June 12.

The initiative — a collaboration between Topman and Fashion East, a non-profit that promotes new labels — will spotlight two designers this season. They are Liam Hodges, a Royal College of Art alumnus who will show his third collection as part of MAN this season, and Rory Parnell-Mooney, who graduated from Central Saint Martins with a masters in men’s wear last year, and who will show with MAN for the second time.

Alongside those designers’ runway shows, there will be a screening of a film called “MAN Turns 10.” Gordon Richardson, creative director of Topman, said of the showcase: “The excitement that MAN still generates before every show is testament to its validity, and Topman is proud to be Fashion East’s partner in this continuous venture.”

Alongside the runway showcase, the MAN program provides designers with financial sponsorship, ongoing business support and a place in sales showrooms in Paris. Past graduates of the scheme include Jonathan Anderson of JW Anderson, Christopher Shannon, Martine Rose, Astrid Andersen and Craig Green.