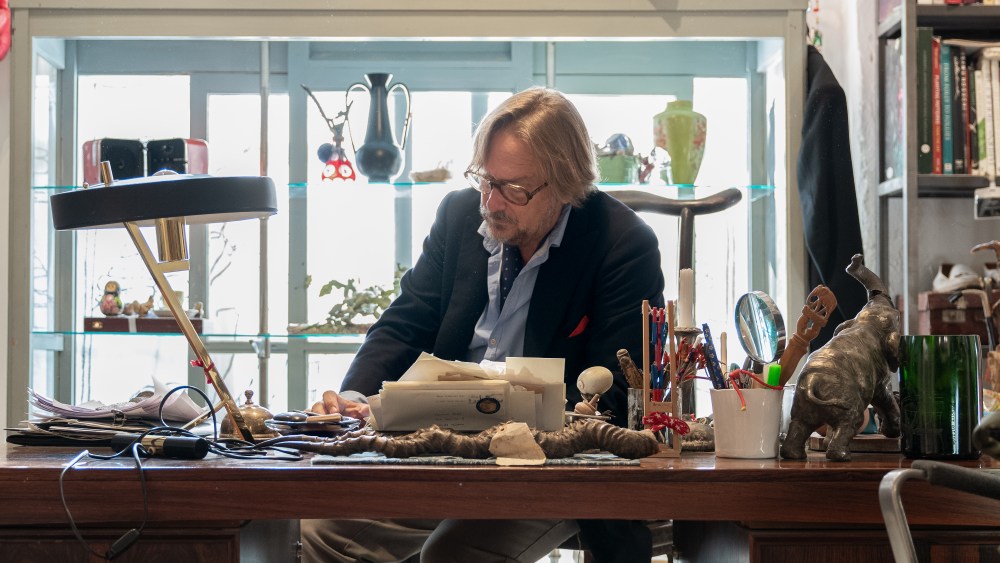 MILAN — At Milan Fashion Week, a new desire to enjoy the simple pleasures of everyday life is emerging strongly across collections, even in the most forward-thinking brands, such as Prada and Fendi.

However, if there is someone in Milan who has always professed that belief, it’s definitely Massimo Alba, who since the founding of his brand has embraced everyday elegance as a mantra.

A designer with an innate sense of style, which isn’t only reflected in his designs but also in his gentlemanly manner and approach to interiors — his office-cum-showroom in Milan is the go-to place for creatives in search for eclectic inspiration — Alba is an enemy of seasonal trends, logos and, most of all, stereotypes.

“For me, a collection is always about a wardrobe that reflects the freedom of an individual who gets up in the morning, picks his clothes and expresses his or her personality,” said Alba during a walk-through of his latest men’s spring 2022 lineup. “Clothes are meant to give people freedom. What is absolutely crucial for me, it’s spreading the message that it’s time to break free from the diktats imposed by the fashion industry.”

Alba, who roots his collections in uncomplicated designs crafted in luxurious materials treated with dyeing and washing processes to give them a signature, almost lived-in look, also believes in fashion’s power to express emotions.

“I think there are deep feelings residing in every item. Fashion is my tool to communicate my feelings,” the designer said. For spring 2022, he explored this concept through a collaboration with artist Elena Cipriani, who created a series of prints for Alba’s signature scarves inspired by objects at the designer’s home.

“I think that at one point, all the designers should invite journalists at lunch at their own homes, since that would say much more about them than the show or the presentation during fashion week,” Alba said. “The way you decorate your home, the way you style the table, the name you give to your children…those things all say who you are, what you want to communicate to the world.”

Alba’s approach to work is very personal, including the opening of the brand’s fifth store, which is located in the center of Tuscany’s high-end seaside resort Forte dei Marmi.

“It has been a major effort for an independent brand to open a store there. We did everything on our own, including the furbishing…we decorated with existing tables, chairs and sofas that I had in other locations. That’s how it works when you are self-financed,” said the designer, who revealed that he is seriously considering taking on outside investment. “It’s a tough decision, since our independence has always been our biggest strength. We have five stores, which is quite incredible for a brand like ours in this economy. I didn’t come from a family with a lot of money, and everything we do, we do it with our work, our passion and effort.”

That said, the support of an investor would help Alba realize two projects that he has in mind — the opening of two international doors, one in New York and one in London.

“Opening a shop in the United States would be ideal also to have a hub for our online store there, while I would like to open in London since I think that there is room for our brand there. Actually, the first customer who made a purchase at the store in Forte dei Marmi was a British guy,” Alba said.

The designer’s dilemma resides in a sort of mistrust of the mechanism of finance applied to fashion. “The world of finance is great and very fascinating, but when it applies to the fashion industry it seems that it takes center stage, rather than putting itself at the disposal of small companies that have a chance to grow,” commented Alba.