Italian designers offer up everything from tasseled loafers to backpacks with Boy Scout-like patches. 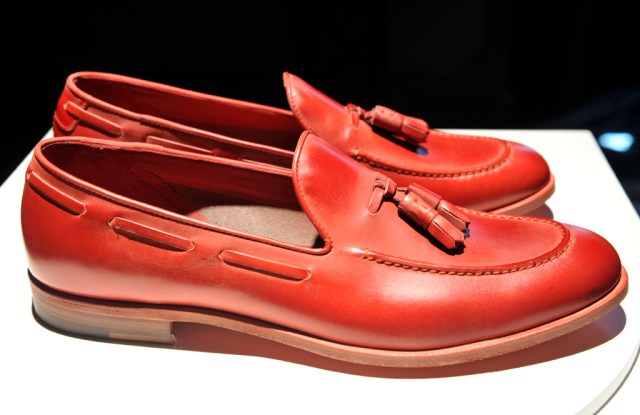 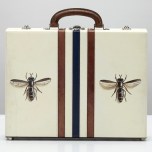 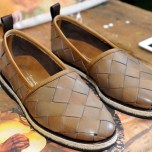 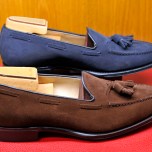 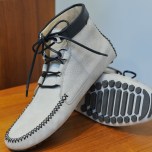 Craftsmanship and precious hides were key elements seen throughout the men’s accessories collections presented in Milan, as were colors and materials mixed for contrasting effects.

Christian Louboutin’s shoes are not for the wallflower. The designer spun pumps, sneakers and espadrilles with an imaginative array of studs, embellishments, multicolored intarsia, mixed media and patterns. The combinations were also translated in fun backpacks.

Picturing “rebel angels,” Giuseppe Zanotti turned out an irreverent collection, mixing heavy hardware with preppy silhouettes. Slip-on brogues came embellished with a sea of metal grommets; esoteric one-toe sandals sparked a chain reaction, while large Western buckles put their stamp on a new shape of high-top sneaker, somewhat harking back to Native American moccasins. Zanotti said he wanted to convey a whiff of Seventies California, which was most evident in a funky pair of desert beige suede slippers enhanced with ethnic patterns, micro-studs, colorful crystals and a playful pair of tassels.

Santoni’s lineup ranged from bicolor, canvas and leather monk-straps to comfortable styles made with strips of calf leather woven by hand.

Valextra’s new chief executive officer, Sara Ferrero, underscored how the brand’s customers need to rely on the functionality of its accessories. Case in point: the versatile Polyhedral bag with an origamilike, space-saving structure that can be flattened when empty.

Church’s presented the “Oreham” model, with a large fringe and tassels on the vamp in soft calf in black, brown and cordovan.

Tasseled loafers were also seen at Fratelli Rossetti, which veered toward a selection of bright hues, including red. Lace-ups were also made modern by the combination of two colors, including azure and aqua green.

For his namesake line, Álvaro González showed backpacks, which came with multiple strap options and a protective pocket for the iPad. He also riffed on his signature sandal, adding an ankle strap. He gave other sandals two parallel straps done in dip-dyed calf or crocodile.

Inspired by the dark atmosphere of the Twenties in the United States, Bertoni 1949 focused on a black-and-white color palette. The brand’s signature pergamena luggage was embellished with hand-painted skulls, bandana motifs and flies. Bertoni also presented the new “Game Trunk,” which contained a sophisticated chessboard.