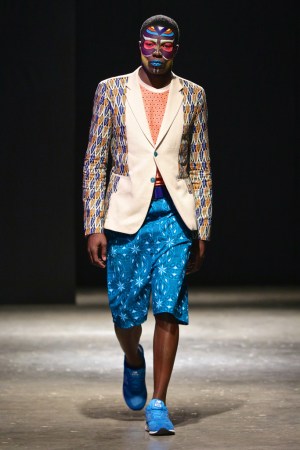 Mercedes-Benz Cape Town Fashion Week bowed last week, the third fashion week in Africa for the month of July alone. Perhaps indicative of the growing popularity of men’s wear in the African market, MBCTFW opened at its new venue at The Watershed along the V&A Waterfront with a show by Goose Homme Prorsum, a new label from young Cape Town designer Snorley McLarean. Other men’s wear designers who showed strong collections during the three-day event included Ruald Rheeder and Adriaan Kuiters.

According to Sizwe Nzimande, group marketing executive of African Fashion International, which owns MBCTFW, “We always look to provide a platform for up-and-coming designers to enhance and drive their careers in fashion.” Goose Homme Prorsum was, along with XIPIXI, one of the two designers who made their debut in Cape Town.

“I wanted to create a collection that would have people at the edge of their seats, and I think I’ve achieved that,” McLarean said. “I am still in shock that I was asked to be the opening event.”

Using fabric he’d been storing since 2010, including a chain-and-rope scarf print reminiscent of Gucci and Hermès that was tailored into a shirt-and-shorts ensemble, the former architecture student-turned-fashion designer explained that he was aiming for “the dapper, preppy, international male. Men in South Africa play it safe too much. They need to be more daring.”

Refusing to be boxed in by an African identity, he chose a name for his brand that sounded slightly eccentric and slightly British. “Using my own name as my brand is not part of my strategy for getting famous,” he stressed.

Another first at the event was the showing of David Tlale’s initial bridal collection, which consisted of 20 pieces. Tlale, one of South Africa’s most established designers, has shown during New York Fashion Week.

The second edition of South African Menswear Week, featuring spring 2016 in the Southern Hemisphere, took place earlier in July, in between the European and New York men’s wear weeks, in keeping with the organizers’ intentions to put SAMW on the international calendar for the sector.

The fashion calendar is already crowded, both in South Africa and abroad, acknowledged SAMW cofounder Simon Deiner, who also happens to be a runway photographer. “We’d like to think that we cut through this by offering the first focused platform, and it appears this has worked, especially due to the way the media locally and internationally have viewed the shows. It does mean we need to offer a viable case for our designers to showcase on our platform; we simply do not have the financial backing of the other SA platforms, but rather invest heavily in our public relations, show spaces and events, than the frills often associated with a fashion week.”

His goal, he said, is that SAMW is seen “as the business platform. We’re working closely with businesses and organizations, such as The South African Fashion Council to develop programs that designers can use to make manufacturing, sourcing and distribution more efficient. As we grow, we also expand our African designer offering to eventually make SAMW the ‘African’ stop on the international men’s wear calendar each season.”

Among the standouts were Orange Culture from Nigeria, which presented a flamboyant Seventies-inspired collection, as well as Oath by Rich Mnisi,  Jenevieve Lyons, Terrence Bray, Augustine, MaXhosa by knitwear specialist Laduma and Fundudzi by Craig Jacobs.

Jacobs, who had built a name for himself with women’s wear and is now making moves into men’s, created a collection that featured reversible elements, oversize shirts and what he called “grandpa pants.”

“Men’s wear seems to be coming into its own. One of the biggest retailers of local designer brands, The Space, is introducing a separate retail concept for men called Space Man, and I am currently negotiating with them to carry my line,” he said. “I think it’s a good fit, since I went more ‘trend’ with this collection, but also with commercial viability in mind so it’s very accessible.”

Jacobs declined to disclose projected retail prices, but said that they would be very “reasonable for the local market.” He characterized the SA men’s wear customer Fundudzi speaks to as being “an Afropolitan man, urban black middle class. I’d say he is someone who is moving up the corporate ladder but proudly African with a global outlook.”

Deiner reported that all the major South African buyers were in attendance, representing both the traditional outlets as well as “all the new options, such as the major online retailers and some of the bigger retailers who collaborate with SA designers.”

In terms of international reach, “this time around we had two agents [who represent African designers] attend, but there were also requests for more information from about a dozen more who are interested in SA men’s wear design. Very few of our designers, however, are truly export-ready, and this is part of our drive to develop and assist them over the course of the next four seasons.”

Gloria Mteyu, founder of the recently concluded Kinshasa Fashion Week in the Democratic Republic of Congo, now on its third season, said that interest was growing, but the market was still “rather timid.”

However, “there never existed a platform for DRC designers,” much less a retail culture.

“We have nevertheless seen a positive effect pouring over in the local communities. We have seen a change in their outlook of the profession, which was not really considered a serious profession before,” she said.

In terms of developing a retail culture, there is still a lot of work to be done. “There haven’t been specific shifts in consumer behavior,” she noted, “the reason being, the design culture has yet to embrace ready-to-wear by Congolese designers. Production is still on an individual, seamstress-tailor basis. In this case, the only concrete change we have noticed is that our designers have had an increase in the number of clients.”

While women’s wear labels such as Okapi de la Mode, Moseka, Fanny Mandina, Bombyx by Rose Bombo, Yasika Mode and MF Couture by Marie France Mumba dominated Kinshasa Fashion Week, men’s wear made a strong showing courtesy of Csquared, Okasol, DM Collection and Stratton Nondo. But the highlight of the three-day event was the performance by Les Sapeurs on July 24 at the Shark Club, fresh from a stint in Paris’ Palais de Tokyo.

Les Sapeurs are part of a movement known as La S.A.P.E., roughly translated as “Society of Ambience Creators and Persons of Elegance,” which emerged in the Congo in the late Sixties, during the dying days of colonialism. They epitomize the “African dandy,” men who dress with a sartorial style that is wholly colorful, exuberant and individual, even as it borrows from Western tailoring.

“It is a society of people that take pride in their clothing and dressing,” said Mteyu.