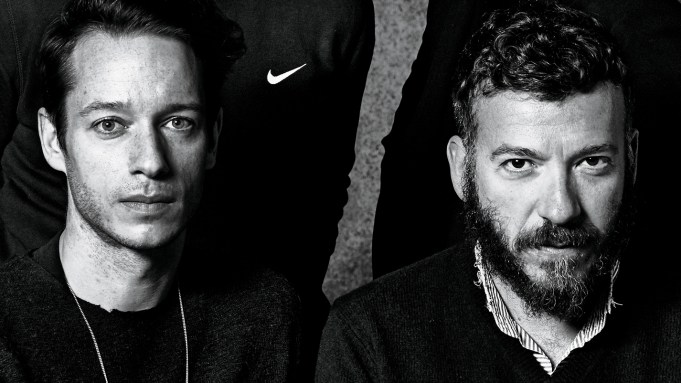 They’re not freshmen — or even sophomores — and already they’ve made names for themselves on the international fashion circuit. But Massimo Giorgetti, Damir Doma, Andrea Incontri and Andrea Pompilio represent the new guard on Milan’s men’s wear scene, helping to reshape the city’s image by injecting a different energy into a market historically anchored by large tailored and luxury brands.

“I’m very positive about the situation of men’s wear in Italy,” said Tiziana Cardini, fashion director of Milan-based department store La Rinascente. “There is a good vibe in Milan, not only because a new generation of designers is affirming its role in both the national and international scenarios, but also because big brands, including the most traditional, are renovating their image.”

Even bigger brands are tapping into the new wave. Tod’s and Canali picked two of the most promising names — Incontri and Pompilio, respectively — to revamp their image and give a younger spin to their collections.

The revived energy isn’t lost on Bruce Pask, men’s fashion director for Bergdorf Goodman. “The younger designers in Milan lend a necessary vitality and freshness to that men’s wear landscape,” he said, expressing his admiration for Incontri’s work for both his line and Tod’s.

“All the members of the Italian Fashion Chamber are keen to give their support to the new generation of designers,” said Camera Nazionale della Moda president and chief executive officer Carlo Capasa. “I think that Giorgetti, Incontri, Pompilio and Doma have their unique style and they perfectly reflect the fact that today’s fashion is the rich combination of extremely different attitudes and approaches.”

Here, a look at the four designers.

His background as an architect — he graduated from the Politecnico di Milano — is constantly reflected in Andrea Incontri’s work. Passionate about the study of shapes and silhouettes, the designer, who launched his namesake brand in 2009, made a name for himself with ready-to-wear and accessories infused with a sense of ease. The collection is available in about 55 stores worldwide.

“I think simplicity is an exercise [that transcends] seasons,” said the designer, 44, who in June 2014 was also named creative director of Tod’s men’s line. “The trademark of the Andrea Incontri man is ‘formal lightness.’ I love design and shapes, and my real challenge is to create pieces which can be a tool to express people’s personalities.”

For the fall 2016 season, Incontri will show a range of outerwear options crafted from padded leather, as well as from some of the most classic Italian sartorial fabrics such as loden, which he uses for coats and bombers. He also is using materials with a more sporty feel, such as heavy nylons and black techno duchesse. “I’ve also worked lightweight wool for supersoft, unlined suits,” he said. Accessories including backpacks with multiple pockets, briefcases and document cases complete the collection. The lineup will be showcased at a presentation on Jan. 18.

In the last decade, many Italian brands decamped to Paris, but last year Croatian designer Damir Doma took the opposite tack. He decided to leave the City of Light, where he started showing his collection in 2009, to settle in a studio in Milan.

The 34-year-old designer, who studied ESMOD in Berlin and Munich, is known for his minimal collections imbued with a certain gender fluidity. He said he found new energy in the Italian city, where he thinks there are more chances for young designers to stand out. For Doma, Milan is also key because it is closer to the factories in Brescia and Turin that produce the collection, sold in about 120 multibrand stores worldwide.

“I wanted to create a very sensitive and mysterious man. The collection is about construction and deconstruction; it’s about the thin line between masculine and feminine. It’s about imperfection, rawness and simplicity; it’s about touching things and leaving things untouched,” Doma said of the fall 2016 collection he will show on Jan. 17.

“Basically it’s a very sculpted collection. We spent lots of time with the pattern-cutters this season. The clothes are volume studies with a strong focus on the materials, finishing and details. The man and the woman are independent, strong. They are creative souls and free spirits.”

After cutting his teeth working for a string of major fashion houses and designers, including Miuccia Prada, Stefano Pilati at Yves Saint Laurent, Alessandro Dell’Acqua and Calvin Klein, Andrea Pompilio launched his brand in June 2011. Pompilio, who is also Canali’s creative consultant, the first tapped by the company, was also the first designer to be chosen by Giorgio Armani to show in his theater in June 2013.

Using vivid colors and patterns, Pompilio’s collections, which are sold in about 50 multibrand stores worldwide, are focused on easy-to-wear pieces crafted from high-end materials. For fall, Pompilio, who will abandon the runway to host a more intimate presentation at his Milan showroom, created a wardrobe of 73 pieces to be unveiled on Jan. 15.

“These will tell my idea of a wardrobe — simply what I like,” said the 43-year-old designer, who studied at Istituto Marangoni in Milan. “The revisited military coat, the double-breasted jacket with surprising details, the sneaker. Iconic, independent pieces, complete in their own individuality. Strong, as usual, due to the quality of a 100 percent Made in Italy expertise, that idea of taste remains my very personal mark: patterns, colors, lines, ‘mismatched’ matches, pervaded by a subtle and never-ending irony.”

Massimo Giorgetti, 38, who launched MSGM in 2009, is among the most successful designers in Italian fashion’s contemporary segment. Giorgetti, who started as a sales assistant in a luxury store, consulted for a range of fashion brands before launching his own line.

Starting with lineups showing bold patterns and vivid colors, over the seasons, Giorgetti, who was named creative director of Emilio Pucci in March, now focuses on a more mature look, setting aside his signature playful graphics to concentrate on edgier silhouettes and high-end finishing.

For the brand’s fall 2016 men’s collection, Giorgetti fused “the eccentricity of grunge and rock ‘n’ roll” with “the rigor of the most classic fabrics of the sartorial tradition.” The designer also said the lineup was inspired by the Seattle of Cameron Crowe’s film “Singles.”