The buzz created by the Expo is trickling down to other industries — including fashion. 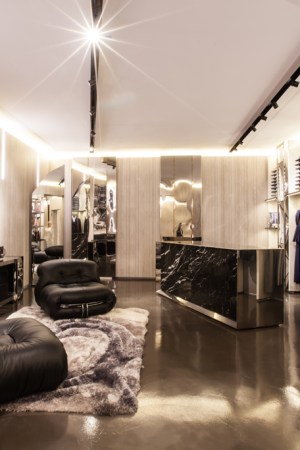 Milan Men’s Fashion Week has some competition this time around.

This season, the shows run concurrently with the city’s largest international event in nearly a century — the international Expo.

Before the Expo closes at the end of October, organizers expect more than 20 million visitors to the fair, which centers on the theme of nutrition and feeding the planet. And the buzz created by the Expo is trickling down to other industries — including fashion.

“Milan is entering a very positive phase,” said Michele Norsa, chief executive officer of Salvatore Ferragamo, lamenting a longtime lack of novelty in the city in terms of art and architecture. “Expo has been the occasion to bring investments in infrastructure to Milan and attention to the city, and this is also touching the fashion world.”

He cited an increasing number of tourists from Asia, the U.S., China and Japan, which is resulting in brisk business for his brand, with ties, shoes and belts among the top-performing categories.

According to the Worldwide Luxury Markets Monitor 2015 Spring Update by Bain & Co. and Fondazione Altagamma, Italy is starting to recover, with a slow rebound in the multibrand channel. Milan — lifted by initiatives associated with the Expo — is the number-one shopping destination. The weak euro is also supporting tourism.

With this as the backdrop, fashion week begins today with Dirk Bikkembergs’ evening show and ends Tuesday with DSquared2, Giorgio Armani, Ermanno Scervino, Christian Pellizzari and Stella Jean. As part of his project to support young designers, Armani is lending his theater to Japanese brand Facetasm founded by Hiromichi Ochiai, which will show on Monday. Marni is holding a men’s runway show for the first time in Milan on Saturday, and Croatian designer Damir Doma is also debuting in town on Monday, moving his show from Paris.

Another big arrival is Ralph Lauren, who will hold a presentation for his spring 2016 men’s Purple Label collection on Saturday at his company’s palazzo. This is the first time the brand has shown in Milan since its World of Ralph Lauren men’s wear show in fall 2003. “The reason for this,” Lauren said of the decision to show in Italy, “is exposure.”

The spring 2016 collections are being unveiled against a backdrop of continuing wobbles in the luxury sector because of slower growth in markets such as China and Russia, which is in contrast to the strong increases brands are seeing in the U.S.

Kiton chief executive officer Antonio De Matteis said he was “very satisfied with the performance” of the brand and noted that sales of the label’s pre-collections “already had excellent feedback. We are very confident for 2015.” He pointed to America as a key market, and said Kiton will open a store in Houston in September. A unit in San Francisco opened in April.

In terms of fashion trends, De Matteis said he continues to see young customers build their wardrobes with suits, sometimes embracing this look for the first time. “After so many years of rags, men want to be more elegant,” said De Matteis.

Gianluca Flore, ceo of Brioni, is also optimistic about the future. He said that after “efforts made in the past three years to integrate Brioni’s organization [within parent group Kering],” the goal is not about repositioning the brand but rather “bringing back its relevance in the market,” and leveraging its “very high legitimacy.”

Flore said that, following an internal reorganization and streamlining of processes, the second half of the year will bring some big announcements about planned expansion in the 2016 to 2018 period.

The ceo said Brioni has seen “an acceleration of results in the past three to four months,” citing a return of the “most loyal” Russians, who are “fundamental” customers for Brioni, as well as new clients. In particular, he pointed to a significantly improving performance at the brand’s Via Gesù boutique in Milan.

The executive, who joined the firm last November from Bottega Veneta, said Brioni has been attracting new shoppers who are between five and 10 years younger than its average. Footwear, he said, is one of the main categories attracting customers who are experiencing Brioni for the first time.

In terms of markets, he cited America as “a pocket of excellence,” along with Russia, Europe — Germany in particular — and the Middle East. Brioni is “very new” in China, hence it has not been impacted by the region’s slowdown, he noted.
Umberto Angeloni, chairman, ceo and majority shareholder of Raffaele Caruso SpA, also said America leads the way in terms of performance for the brand, but the company, which counts Chinese investment group Fosun International Ltd. as a shareholder, continues to eye Asia, with plans to open a unit in Shanghai in June 2016 as well as a flagship in Tokyo.

Angeloni cited a shift in consumer attitude, as shoppers reevaluate their loyalty. “Quality is not enough if there is no value,” said Angeloni, adding that touting “heritage” is also no longer sufficient “if tradition is not relevant or perceived as true. Consumers are more astute and more evolved. Customers are not interested in extreme or volatile design, which is seen as marketing. Classic designs must also evolve and innovate, never stand still.” Supporting that stance, Angeloni trumpeted 32 employees solely dedicated to research and development at Caruso.

Pal Zileri ceo Paolo Roviera was especially proud of the progress made in the group’s distribution and retail network under the company’s new owner, the Qatar-based Mayhoola for Investments S.P.C.

The brand’s newly refurbished store in Milan’s Via Manzoni reopened on June 16 with an additional VIP and made-to-measure room. Coming up next are a unit in London, which will reopen in mid-July; two franchised, relocated stores at the Dubai Mall of Emirates; a new location in Beirut, as well as corners scheduled to open next year in Doha, Qatar; Kuwait City, Kuwait; and Moscow.

“We also have acquired two new key clients: Saks and Beymen. I am very satisfied, and we have finally [turned around our performance] with the spring/summer 2016 collection,” said Roviera, who joined the Italian men’s wear house a year ago and has been revamping the label with the help of designer Mauro Ravizza Krieger.

The executive was upbeat about the men’s market and forecast a “positive trend” going forward. Roviera sees “a reinterpretation of the power suit, with a use of formal elements, as there is a good portion of the world in which formal continues to be worn as a work suit but in a different way, especially in those countries that are key, such as Korea and Japan, for example.”

After years of showing at Pitti Uomo in Florence, Eleventy will hold its presentation in Milan on Sunday. In December, private equity fund Vei Capital took a 51 percent stake in the Italian company launched in 2007 by creative director Marco Baldassari, Paolo Zuntini and Andrea Scuderi, with the goal to expand it internationally. The group is expected to close 2015 with a 35 percent increase in sales to 16 million euros, or $17.7 million at current exchange. Sergio Ravagli, managing partner of Palladio Finanziaria, which manages Vei Capital, said the objective is to reach revenues of 50 million euros, or $55.5 million, in 2019.

Eleventy has signed a joint venture with former Goldman Sachs & Co. banker Earl Rotman to expand in the U.S., and plans to open a flagship in SoHo and shop-in-shops at Bloomingdale’s and Saks Fifth Avenue by the end of the year.

Baldassari said the spring 2016 collection is inspired by London’s Teddy Boys in the Fifties, with a lineup that includes houndstooth tailored blazers, a plethora of vests and waistcoats in pierced leather or denim, biker jackets in washed black napa, and straight-leg pants.