Milan Men’s Shows: Ones to Watch

Brands to watch in Milan. 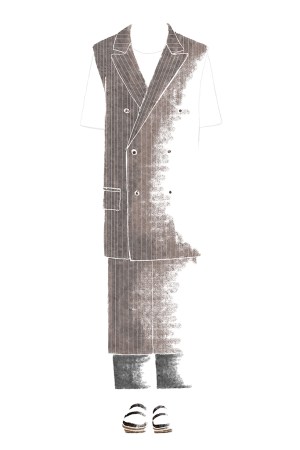 Pure silhouettes and a sense of relaxed elegance are the basis of the brand Lucio Vanotti launched in 2012.
The Milan-based designer established his namesake label after nine years spent developing “February,” a line of contemporary apparel influenced by the Japanese aesthetic.

“At a certain point I felt that I wanted a more personal project, which could be more easily associated with Made in Italy,” said Vanotti, who produces the men’s and women’s collections entirely in his native country.

For spring, the men’s collection is inspired by architecture. “In particular, I looked to the radical architecture of Milan’s Superstudio and to the constructivism,” Vanotti said.

The designer translated this inspiration into a chic, yet easy-to-wear, lineup focused on unconventional proportions and different layers.

The collection also includes a range of lightweight and deconstructed suits.

The color palette focused on white, black and blue with hints of brown and rust, and two different textured fabrics with checkered and dotted patterns.

Damir Doma is gearing up to make its Milan debut with a men’s show on June 22.

The Croatian designer has recently relocated from Paris to Milan, where he opened a design studio on Via Savona, a stone’s throw from the headquarters of several fashion labels including Giorgio Armani, Diesel and Ermenegildo Zegna.

“I think Milan is positioning itself in a new way,” Doma said. “I see much potential in Milan, while in Paris for a brand like mine, you get the right visibility for one season only.”

Being based in Milan also allows Doma to easily collaborate with the companies in Brescia and Turin that produce his collections.

For next spring, Doma, who made a name for himself with collections focused on sophisticated constructions and volumes, created elongated silhouettes characterized by an unfinished aspect aimed at displaying the craftsmanship behind the label.

The collections include a range of slim coats, fluid pants and trousers inspired by skirts. Fabrics include linen and viscose blends, cottons with a paper feel and raw linen. Doma produced an arty take on macro checks as part of the lineup, which also includes touches of pink to liven up the neutral color palette.