New and Noteworthy Brands at the Milan Men’s Shows

New designers and expanded offerings are among the highlights of the fall season.

By Alessandra Turra and Luisa Zargani on January 15, 2016
View Slideshow 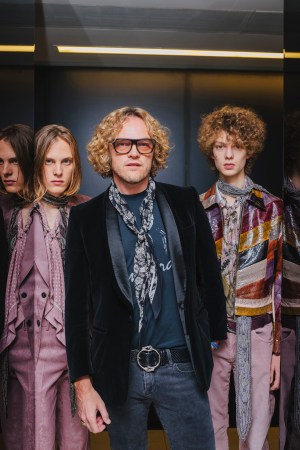 This story first appeared in the January 15, 2016 issue of WWD. Subscribe Today.

Peter Dundas is going to reveal a piece of himself at his debut men’s collection for Roberto Cavalli.

“I feel very comfortable designing men’s,” he said, “and I’m taking a very personal point of view. I really created a wardrobe that I wanted for myself and my friends.”

The Norwegian designer, who was appointed creative director of the brand last March, unveils his first men’s collection for the Florentine label on Friday night in Milan.

“I took two angles in designing the collection,” he explained. One is the idea of creating a wardrobe that fits a man’s needs and his personal aesthetic. The other is music.

“I looked at many musicians, like Jimmy Page, Mick Jagger, Keith Richard, Serge Gainsbourg, Jimi Hendrix and also George Harrison — my favorite of The Beatles,” he said.

But beyond that, the collection is rooted in freedom, according to Dundas: “Freedom is at the base of the spirit of the brand and I want to keep the Cavalli vibe alive.”

To stay contemporary, Dundas said the lineup includes a range of pieces that can be easily mixed and matched. “It’s rich, a bit decadent, casual, effortless. It doesn’t feel stiff,” he said, noting that his goal is to “bring some casualness to the brand [even] in moments of high glamour.”

To that point, jackets and coats are decorated with gold and silver embroideries, appliqués and patchwork details. Many pieces are executed in opulent jacquards. The designer also worked in leather that had been treated using varying techniques, as well as fur, which he printed with animal patterns.

In addition, Dundas created patterns with flora and fauna elements inspired by William Morris, used, for example, in fluid shirts.

The overall color palette of the collection includes different tones of purple along with earth hues and muted shades.

The accessories range includes a bag featuring a guitar-like strap, as well as high- and low-top sneakers and booties in leopard patterns and solid washed leathers that provide a lived-in effect.

“There is no complication,” Dundas said. “This collection is very close to my heart.” — ALESSANDRA TURRA

Lucio Vanotti will make his runway debut at the Armani Theater on Saturday.

“When they told me about the possibility of showing there, I was happy because this collection is very close to Giorgio Armani’s taste and to the  aesthetic of the location,” said Vanotti, who launched his namesake label in 2012. “I admire Armani’s work and I see myself [as part of this] Italian wave he created.”

For fall, Vanotti explored a universe of uniforms, from military to religious ones.

“The collection is infused with a sense of severity that doesn’t only refer to the military atmosphere, but also evokes a sense of moral rigor,” said the designer, who exhibits a taste for graphic, essential shapes.

This season, he focuses on elongated silhouettes and plays with “wrong proportions” pairings — for example, long jackets with short pants. Among the standouts are double-breasted blazers with kimonolike sleeves and military coats deconstructed to resemble robes.

This is a season of debuts for Italian luxury men’s wear brand Boglioli.

The company is not only hosting its first runway show, to be held Jan. 17 at Milan’s Società del Giardino, it is also unveiling the inaugural collection designed by Davide Marello, the first creative director to be appointed by the label.

Before joining Boglioli in November, Marello worked for more than nine years at Gucci with Frida Giannini and then six months with Alessandro Michele.

“I want to respect the story of the brand, but my goal is to develop it through a vision projected toward the future,” said Marello, adding the collection is focused on “soft tailoring with an experimental approach.”

Men’s suiting fabrics include carded cloths, chevrons, tweeds and Prince of Wales that are washed, treated with various techniques and garment-dyed.

“The goal was to make all the materials, from fabrics to leather, as lightweight as possible without losing their original [attributes],” Marello said.

As a result, suits, separates and outerwear sport two silhouettes: “One wrapping the body, the other more [true] to classic tailoring standards,” he explained.

The color palette is rich in warm, burnt tones, camels and tobacco combined with cooler hues of blue and sky blue.

To complete the lineup, he also designed a small range of bags, such as clutches and weekend options, crafted from soft materials treated to resemble fabric. — ALESSANDRA TURRA

Italian tailoring label Pal Zileri has taken the plunge. On Jan. 16, it will host its first show on the Milan Fashion Chamber’s official schedule, featuring the collection from creative director Mauro Ravizza Krieger.

“The idea behind the collection is urban tailoring with a strong focus on sportswear,” said Ravizza Krieger, who joined the company last January. “The aesthetic is rooted in the company’s DNA. We wanted to develop a collection focused on tailoring, but reinterpret it in a contemporary way in terms of proportions, volume and materials.”

In keeping with the sartorial tradition of Vicenza, where the company is based, coats and jackets are cut in clean, rigid silhouettes. But they’re softened by the more voluminous shapes of the bottoms, including relaxed, pleated pants. Silk shirts and scarves add romantic accents.

Peuterey Studio, designed by new creative director Federico Curradi, will make its debut in Milan on Jan. 17 at the Neoclassical Palazzo Serbelloni.

Chief executive officer Francesco Pesci aims to create a comprehensive brand and expand Peuterey globally. The arrival of Curradi in November, he said, was intended “to create more desirability around the brand. He comes from the fashion world, rather than the sportswear arena, and knows how to create total looks.”

Pesci lamented the “excessive attention” paid to function and technical performance in the sportswear segment, which he believes is not enough to spur business. Instead, Pesci wants to rebalance the label’s sales, which are heavily skewed to outerwear to create year-round demand.

And Curradi is the man to do it, Pesci believes. Born in Florence in 1975, Curradi was previously men’s wear creative director for Iceberg. He lived in New York for several years before moving back to Italy, first working at Ermanno Daelli, then as head of the men’s styling office at Ermanno Scervino. In 2005, he became head of the men’s collection at Roberto Cavalli. A year later, he started working with Iceberg on the company’s men’s wear as a fashion and creative consultant. He was appointed Iceberg’s first men’s wear creative director in June 2013, but left in November.

His line for Peuterey is all made in Italy with sophisticated fabrics and construction. The fall line targets “two souls in symbiosis, a man who thinks and works in the city,” setting an “urban dynamism” at the heart of the collection. The intellectual and working worlds blend, as Curradi focuses on the architect’s sphere. Not by chance, the collection winks at Gianfranco Ferré — himself an architect — as well as Giorgio Armani in the Eighties.

“This is a pleasant man, easy to understand, and not conceptual. The collection is a mix of technical and sportswear for the everyday urban hero,” said Curradi.

Technical wools contribute to the functionality of parkas and blousons; tailored overcoats and duffels have internal straps that can be worn as rucksacks; fustian blazers have detachable linings and shearling collars; knits exhibit mathematical jacquards and geometric intarsia inspired by Euclid’s theorems, while patch pockets and tool belts or collars round out the details.

Curradi created exclusive fabrics for the collection that range from double-faced, technical and diagonal wools to nylon and gabardine in a color palette of charcoal, rust, military green and black. — LUISA ZARGANI