The 4,000-square-foot shop allows the performance brand with the contemporary design aesthetic to test the market in New York City.

Sease is testing the waters — and the mountains and the bike lanes — of New York City with its first U.S. pop-up.

The Milan-based performance lifestyle brand geared to the mountains, seas and cities, has teamed with Moda Operandi on the 4,000-square-foot shop at 160 West Broadway in TriBeCa. It will remain open through Nov. 3.

The space is a former gallery and Sease took an “art gallery approach” when creating the space. There are photographs and images that speak to the brand’s ethos on the walls, and a curated collection of key items are hung from fixtures at the front of the space.

“It’s minimalistic and conceptual,” said Franco Loro Piana, Sease’s founder and creative director, adding that the aesthetic helps “give soul to the brand.” 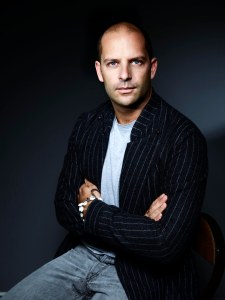 Loro Piana had previously worked at his family’s luxury textile company until it was sold to LVMH for 2 billion euros in 2013. A few years later, he and his brother Giacomo created Sease, which seamlessly blends their innate knowledge of luxury fabrics with their passion for sports, notably skiing and sailing. The collection is highly technical but incorporates high-end fabrics in contemporary designs that work as well strolling in an urban setting as riding on a bicycle.

“We’re creating a contemporary wardrobe of solutions to live day to day. We combine tradition with innovation and elegance with performance,” he said. For example, cashmere pinstripe suiting fabrics have been styled into a sweatshirt/hoodie and Solaro, a 200-year-plus technical fabric used primarily in tailored clothing, has been fashioned into a ski suit. 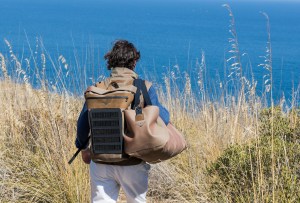 The store also showcases the brand’s collaboration with Sebago which created Docksiders from Solaro fabric, along with a Mission solar-powered canvas backpack and a few “gadgets.”

“We think like an active brand, with a base layer, a mid layer and a shell, but we use high-quality materials,” Loro Piana said. He added that while the products boast all the bells and whistles of performancewear — wind- and water-resistance, UV protection — their design makes them appropriate to wear in the city as well.

Josh Peskowitz, men’s fashion director for Moda Operandi, said this is the first time the luxury e-commerce site has opened a brick-and-mortar location for a brand. But after meeting Loro Piana and seeing the collection and the company’s concept store in Milan’s artsy Brera district, they began to talk about a larger partnership. “We especially like how he brought all these other items together like compasses, sunglasses, record players and bicycles. He has a very distinct vision.”

Moda Operandi is processing the orders from the shop through its web site and the collection will also be carried on its e-commerce site.

Peskowitz said that if this is successful, Moda Operandi would consider other such pop-ups in the future. “The men’s business is just around a year old at Moda and we’re still in the establishment phase and discovering who the Moda man is,” he said.

Loro Piana has high hopes for the pop-up and said it could be a precursor to eventually opening a permanent shop in New York. In addition to Milan, Sease has stores in St. Moritz, St. Tropez and Porto Cervo in Sardinia.

“Presenting the brand in its own environment allows us to better show the pillars and brand values,” he said. “New York would be a great market for us. People will understand Sease here, and there will be less price resistance. So it would be nice to be here, but we’re not ready yet.”