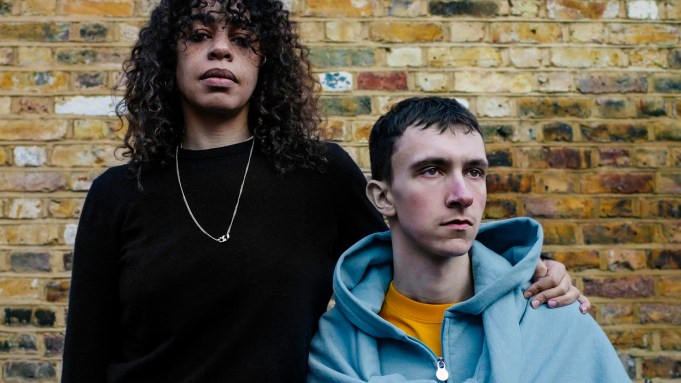 That’s what designers, brands and consumers want. Whether they’re fighting their way to work on public transportation, readying for a wedding, or taking the spaniel for a stroll, today’s men are looking for smart, tailored pieces they can wear with the hoodies, tracksuits and sneakers already brimming from their drawers and closets.

For fall, London designer Martine Rose said she’s taken “real formalwear and thrown it on its head. So we have ruffled prom shirts in really oversize silhouettes, and we’ve done tailoring — but in latex. Actually, the punks were really quite smart if you think of Joe Strummer and even Johnny Rotten — they used to wear tailoring a lot.”

Rose said there is definitely an “uptake in tailoring, but not necessarily to look smart. It is not how your dad would wear tailoring, but how you would wear a tailored jacket with a tracksuit bottom or something. There really is this move toward tailoring, but it is really taking it and making it your own — integrating it into your wardrobe and not viewing it as a special, formal thing.”

This season, Rose is collaborating with Farah to mark the British brand’s 100th anniversary, and she’s worked tailoring into that collection, too. Rose has done a four-pocket safari jacket paired with Farah’s signature creased trousers — the height of fashion in Seventies Britain — and added the famous crease to her oversize chinos.

Retailers will argue that streetwear is far from over — despite Virgil Abloh’s recent comments — and they’re right. But they’re also making room for more tailored separates and coats, dressy shirts and statement pieces on the shop floor. It’s as if the industry has hit peak street and is choosing a new way to dress.

“Fashion tailoring” — jackets and trouser separates — has made a comeback at Harrods, according to Simon Longland, head of men’s wear, while the store is now selling tuxedos 12 months a year.

“It’s not about suiting, but about a jacket or an overcoat, a move away from suits to tailored separates,” he said, adding that it was Kim Jones’ first show for Dior, spring/summer 2019, that marked a turning point. “That show washed across the industry,” he said.

“Streetwear is not dying, it’s just evolving, with more tailored pieces in the mix. Kim Jones is constantly balancing that mix between streetwear and luxury and elevated. That’s what relevant men’s wear is all about. It’s not about pigeonholing brands into streetwear or luxury. The lines are blurring.”

Like Longland, Cassidy said tailored separates, and jackets in particular, are very strong. “The customer might wear them with more of a casual bottom, they might wear them with a T-shirt. Separate jackets and shirts I would say are the key highlights for us this season.”

Across the street from Selfridges, Browns is making more space for tailored clothing, too. Dean Cook, men’s wear buying manager at Browns, despaired when he couldn’t find a dress shirt — at home or in the store — when he was packing for a wedding.

“We’re swapping the hoodie for a sleeve. We think it’s time to move to suiting and talk about people dressing up a bit. As we get ready to open Brook Street [in the summer of 2020], we want people to be able to find something beyond the fashion suit at Browns and have bought into brands like Kiton, Tom Ford and Canali,” he said.

Mytheresa will launch men’s wear later this month, starting with a Prada capsule collection, and it’s all about the tilt toward sharper dressing.

While the offer will include sneakers and lots of casualwear, anyone looking for pure streetwear will be let down.

“It’s high-fashion, post-streetwear,” said Michael Kliger, president of Mytheresa. “The tailoring, the suiting, the appreciation of classic fabrics, will be different from what we had before streetwear. It will be the next evolution.”

To wit, the debut Mytheresa x Prada capsule, which will land online on Jan. 8, fuses outerwear, sportswear — and formalwear — alongside original America’s Cup sneakers, hats and bags. Models in the campaign are wearing tailored jackets over zip-collar windbreakers.

Jake Burt, part of the design duo behind the London men’s wear label Stefan Cooke, sees the rise of tailoring through a different lens.

“We talk a lot with people about post-Balenciaga and Vetements. I really liked it when it was happening, this idea of souvenir and throwaway and turning it into high fashion. That was so amazing for a while, but now people are interested in craft again. They care about how clothes are made, and everyone seems to be ready to spend money on this sort of thing.”

Traditional tailors and brands are not only basking in the extra attention — they’re using it to leverage tailoring’s environmental credentials, too.

Thomas Pink, which re-branded as Pink Shirtmaker and launched a bespoke service earlier this year, wants all of its shirts, even the off-the-peg ones, to last. The company will remake and replace worn-out collars and cuffs and also has a recycling program, which will turn old shirt fabric into cushion stuffing.

“Already, we’re producing something that is built like a tank,” said Pink’s chief executive officer Christopher Zanardi-Landi, “and we want people to buy a lot less, care about what they are wearing and have shirts that last longer.”

He also said the brand is listening closely to younger clients, “who care more about values than product.”

Zanardi-Landi said that the worlds of work and play are merging and Pink has responded by launching a Smart collection of shirts that can be worn tucked, or untucked. All of them have softer collars, so they can be worn with or without a tie, and some have stretch in them.

There’s no doubt the hybrid approach to men’s wear, the new fusion of formal and informal, will be the focus of the men’s shows from London to Florence to Milan and Paris. Those changes have also affected how, when and where brands and designers are deciding to show.

For the first time, the British Fashion Council and Italy’s Camera Nazionale della Moda have struck a deal that will see a series of events take place from Jan. 11 to 13 during Milan Fashion Week Men’s.

Instead of showing in London, A-Cold-Wall will stage its fall 2020 runway show at the Palazzo del Ghiaccio, while other London men’s labels will take part in a London Show Rooms art installation at Spazio Savona 56.

Alexander McQueen, which has staged men’s presentations in both London and Milan in the past, will return to the Italian city on Jan. 12.

The idea for the collaboration was hatched by Stefano Martinetto, cofounder and ceo of the business accelerator Tomorrow, and the Camera’s president Carlo Capasa said it would make Milan’s Men Fashion Week even more international.

Gucci men’s is also making a return to the calendar, prompting cheers from retailers who’d always thought the collection deserved its own show — and audience — separate from the women’s wear. The return of Gucci men’s has also added an extra day to the Milan calendar.

There are more international moves afoot, with brands piling into Paris, too.

Londoners Craig Green and Kiko Kostadinov are both making the switch to Paris Men’s Fashion Week, as is Natasha Zinko. She said she’s taking her Duo men’s brand to Paris to energize the business and gain additional, international fans.

Rushemy Botter and Lisi Herrebrugh, creative directors of Nina Ricci, will be showing their first collection on the official schedule for Botter, the men’s wear brand they founded in 2017 and for which they won the 2018 Hyères Fashion Festival’s main prize.

Other names joining the Paris men’s calendar are Casablanca; Rochas Homme, under the creative direction of Federico Curradi, and Los Angeles-based label Rhude, which made its Paris debut last season as part of the presentation schedule.

Returning to the schedule are Jacquemus, who chose to present men’s and women’s together in a lavender field in June, and Givenchy. It will also be Clare Waight Keller’s second stand-alone men’s show since the French house unveiled its spring 2020 collection at Pitti Uomo in June.

While tailoring is sure to play a starring — or supporting role — in many of these shows (if it hasn’t already), not everyone is rejoicing.

Last October British tailors and suit makers, on and off Savile Row, were blindsided by a new set of U.S. tariffs on products including cashmere sweaters and men’s suits from the U.K. The 25 percent tariffs were the result of a World Trade Organization ruling stemming from a long-running dispute between the U.S. and the European Union over subsidies to the aviation industry.

Some tailors have begun to feel the pain, while others said they haven’t heard a squawk — yet — from their U.S. clients, who are now having to pay extra for their suits.

“It’s a real problem for us, as the U.S. is 50 percent of our market,” said Anda Rowland of Anderson & Sheppard, which is located just off Savile Row on Old Burlington Street. “The U.S. is a big market for all of the tailors. We do trunk shows there and American clients visit us in London.”

Rowland — and everyone else — is hoping the measures are temporary and that the U.K. and the EU can resolve the dispute with the U.S.

Sean Dixon, cofounder of the Savile Row tailor Richard James, said the U.S. continues to be a big focus for the company, which earlier this year opened a store in Manhattan, on the corner of 57th Street and Park Avenue.

“We’ll try to absorb as much of them [the tariffs] as we can, and not pass them onto the customer,” he said.

Good thing that tailored separates are back in fashion, because they’re not subject to the same tariffs — unless they’re cashmere, of course.