Designer Daisuke Obana was a former buyer who created his first deconstructed collection nearly 20 years ago.

By Kelly Wetherille
with contributions from Jean E. Palmieri
on February 4, 2019
View Slideshow 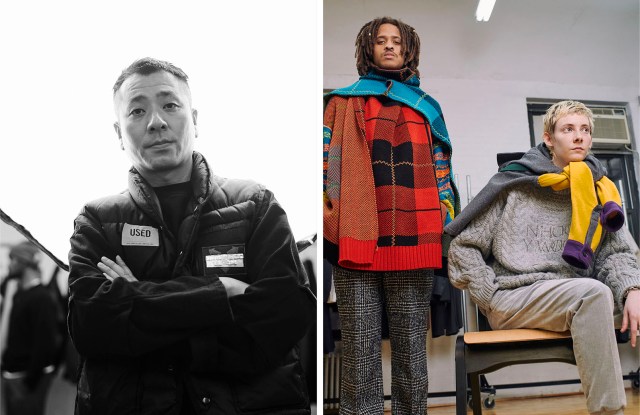 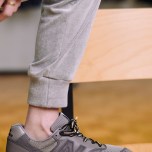 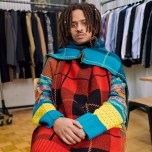 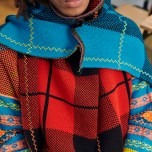 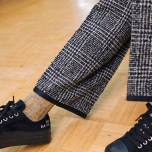 TOKYO — Over the past several seasons, N.Hoolywood has become a staple on the New York Fashion Week: Men’s calendar, and it’s not only for its stylish collection. The brand is well-known for street-casting the models who walk in the show, and often the models draw nearly as much buzz as the clothes themselves.

“After the show ends, there are people from casting companies and modeling agencies waiting outside every time,” said N.Hoolywood’s designer Daisuke Obana. “Some models have even hit it big after walking in our show.”

Obana started his brand almost by accident. He had been working as a buyer for a popular vintage clothing store in Tokyo, making up to 10 buying trips to different parts of the U.S. every year. But after working in the vintage industry for about a decade, he noticed that the best items were getting harder and harder to find, and he started to question whether there was a future for him in his vocation.

“At that time there were a lot of things that were in terrible condition but had a good aura, or things that didn’t hold any value to most people but were still cool,” he said. “So I started to select and edit those, and to pick up and rework the things that were in bad shape. I thought it would be good if I could take things that already existed, change them in different ways, and make them look fashionable. And that was how the brand I have now started.”

The name of the label even traces its roots to that era. Obana got the nickname Mr. Hollywood when he was poring through the vintage stores in North Hollywood back in his retail days. A friend called him a hooligan because he was “crazy” back then, he said with a laugh, and the N.Hoolywood name stuck.

Also in those early years, Obana was approached by stylist Tsuyoshi Nimura, who was planning a club event that combined music with fashion. Nimura ended up showing N.Hoolywood’s pieces in an installation style on street-cast models. Obana, who had never considered doing any kind of fashion show, was almost entirely hands-off.

“In the beginning I left everything up to [Nimura] and I actually watched my own show,” the designer said. “I think that’s something that other designers have definitely not experienced.”

This first event, which took place late at night, drew between 400 and 500 people and garnered lots of buzz and press for N.Hoolywood. Obana recognized his opening, and decided to seize the opportunity to begin designing full collections from scratch, rather than reworking vintage pieces. A season or two later, he decided to do his first runway show and asked Nimura to work with him again. The two have been collaborating on N.Hoolywood shows ever since.

“We’ve been doing this for almost 20 years and we’re very comfortable working together. There’s a mutual respect and trust,” Obana said. “I really think that if you only use the designer’s ideas for styling and casting, it ends up looking the same every time.”

As the lead casting director, Nimura flies into New York earlier than Obana. He and other members of the team split into groups and hit areas from the Bronx to Brooklyn, N.Y., focusing on universities, art schools and gathering places for youth such as parks, Union Square, and even basketball courts. Over the course of five days, they select between 200 and 350 possible models for the upcoming show.

“They used to have to walk around in the snow or the heat with clipboards and pens to get everyone’s information on the spot, and take photos with a digital camera to load them onto a computer later,” Obana said. “But now with Instagram, the process has become much easier. It’s organizing the information that has become a challenge.”

Before the casting process begins, Obana and Nimura discuss the collection and what kinds of models would complement it best. Once, when N.Hoolywood did a speakeasy-themed collection, the pair decided to cast real-life bartenders for the show. The fall 2018 show featured real construction workers for Obana’s reinterpretation of workwear.

But this season, Obana was unsure of what to expect when it came time for the appointments that would lead to choosing the final cast of 30 to 40 models.

“This time, since the collection represents a mix of my ideas, Nimura said he would go out, look at the atmosphere on the street and what kind of people are out there, and then think about what kinds of people would be best,” he said.

For the fall casting, he turned to a couple of his favorite finds who will walk the runway this time. They include Faheem Allah, a 24-year-old from Philadelphia, who was discovered at a skate park about a year ago. He laughs when recalling that he had only $3 in his pocket and visited the park as a way to earn some extra cash for his tricks. It was there that Obana’s team approached him about modeling. Although it wasn’t something he’d ever done before, he liked the idea — and the payout — so he was all in.

Allah said modeling for N.Hoolywood has “changed my life in a fashion sense” by exposing him to styles and clothes he hadn’t seen before. “And I now have a new hobby: fashion and modeling,” he said with a smile.

Grace Parish, one of the women Obana uses in his men’s wear shows, wasn’t as easy to convince when approached to model for the brand. The 22-year-old New Yorker was in her freshman year in college, eating a meal in the dining hall, when the casting team made the request. “I said no,” she said. “I was nervous.” But when the ask came again the next year, she agreed, and has been working with the brand for several seasons.

When not modeling, she’s a waitress with a degree in biology that she’s still figuring out what to do with. Until that time, she enjoys her modeling sideline. “I like playing dress-up, but it also feels real,” she said of her experience. “It’s clothes I’d wear, much more so than women’s runway.”

Giving people clothes that speak to them is part of what makes Obana successful. For the fall collection he’ll show Tuesday at the Metropolitan Pavilion, it’s all about conquering his dislikes.

“For example, I’ve never liked checks or camouflage. I love military items, but I am really bad at wearing them,” he said. “So I started thinking, what kind of camouflage would I be able to wear? What kind of checks would I wear? And I started combining things like a collage and came up with a checked pattern that doesn’t look like checks, and a camouflage that doesn’t look like camouflage. I want to do things that will help me to change the things that I think about negatively into something positive.”

The offering will feature various hidden details in the clothes that may not be immediately apparent during the show. Key pieces will include an array of two-in-one jackets, such as one with a goat leather exterior and a polyester bomber jacket underneath, and a black-and-white herringbone coat that can be removed to expose a bright yellow blazer.

The collection will provide a preview of Obana’s latest collaborations with Woolrich, New Balance, Converse and Outdoor Products. The Woolrich jackets are also two-for-one models, but in a modification of the brand’s original bomber in a more voluminous silhouette with larger pockets and neon mesh detailing. The Converse sneakers are updates on a model used by the U.S. military for phys-ed training, while the Outdoor Products backpacks are colorful and multifunctional, with pieces that can be removed and worn as waist packs. He used the Cordura fabrics from the backpacks to create a kimono-style coat as well.

“I think it’ll be a collection in which the individual items shine brighter than the looks,” Obana said. “It might be easier to understand it when seeing each piece up close rather than on the runway. The pieces are simple, but the construction includes a lot of unexpected elements.”

Obana is fastidious with his attention to detail, and he spends months perfecting his samples so that what appears in his show is essentially identical to the end products that will be sold in stores. (His stockists are heavily concentrated in Asia with a few retailers in North America.) Because of this — as well as his unconventional design method — his collections take roughly a year to get from conception to the runway.

“I think most people start by checking fabrics, then they might take a trip based on their inspiration, and then they start designing based on their thoughts from both the fabrics and their trip. I think that’s the stereotypical way for designers to work,” he said. “But I take a trip first, then when I come back I start drawing my looks and I make the patterns first. Once the shapes have taken form, that’s the first time I put fabric on them. So because of textile production times, it takes a really long time for me to make a collection.”

Looking at Obana’s pieces up close, one would never guess that he has no formal design training and that he never intended to have his own brand that participates in one of the world’s biggest fashion weeks.

“Even I think it’s a wonder. This wasn’t a brand that I started with the intention of lasting this long,” he said. “Or better put, I was working so frantically that I didn’t even think whether it would continue or not. But when I think about it, it’s really been around for a good amount of time.”

But Obana has no regrets, and he says that he wants to keep doing what he’s doing for as long as he can, provided that he continues to harbor a passion for it.