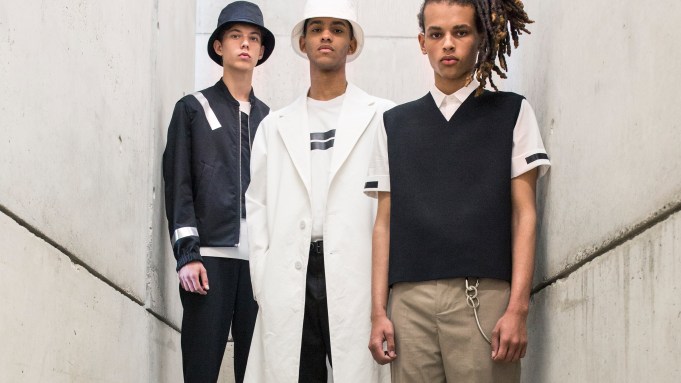 MILAN — “A new chapter in my company’s story.”

That’s how Neil Barrett described the developments at his namesake brand, which recently set up shop in a new headquarters on Milan’s Via Ceresio. The 538,200-square-foot building was part of a former electrical plant and currently houses the Dsquared2 offices with the Ceresio 7 restaurant and gym as well.

“Finally we’re able to house all the operations under one roof,” Barrett said. “I used to be in seven different buildings before and so we would always get wet during the winter moving from one appointment to the other. It kept us quite real.”

That down-to-earth attitude is the spirit that has always guided the designer’s decisions — a low-key, steady-as-he-goes approach to growth that has enabled him to remain independent while generating revenues of more than 90 million euros in 2016.

“It’s such a pleasure to have such a big space that’s been designed specifically for every single operation in the building. It’s really tailor-made,” said Barrett.

Designed by Milanese architecture firm Storage Associati, the building, which features a faded black facade punctuated by myriad windows on both the front and the back, perfectly reflects the sleek, minimal aesthetic of the brand with its graphic combination of concrete and glass.

“Everything revolves around this central void. The concept that I’ve always dreamed of is this black cube jetting out into the void on different levels, irregularly, and so you have this sort of play on the black cubes, the white materials, the rustic cement walls and the glass. It’s very focused on a range of materials, just repeated. The idea was to create multiple viewpoints of geometric combinations in black, white cement and glass and that’s so very much part of the aesthetic of the brand,” Barrett explained. “It’s almost like a trademark of my designs over the last 15 years. And I really wanted to create view points everywhere, any angle I look at, I have this sort of combination of geometric lines; it’s very photographically inspiring.”

The new location also offers a show space on the first floor, which will be inaugurated on June 17 by the brand’s men’s wear spring 2018 runway show. A seated dinner will follow the show, while, from the following week, the space will house the brand’s sales operations.

The business and creative divisions are located on the second and third floors, respectively, while the designer’s archives will be in the basement.

“I haven’t seen my archives for ever in my 25 years,” Barrett admitted. “I’ve collected things but I’ve never actually looked at them so it will be absolutely amazing to actually open the boxes and employ a librarian to sort of create this archive. So looking forward to that — there are so many garments.”

As often happens in transformative moments, Barrett went back in time to the early years of his career to find the inspiration for his latest men’s collection.

“I’ve been working through my life, through to my teenage years, my university years, through to the beginning when I was at Prada, and the show’s basically centered around that period,” said the British designer. “I’m trying to get across the simplicity of the way I would wear garments. There’s a sort of an homage to Donald Judd that’s also visible within the graphics. Then there’s a sort of liquid ink story that I’m trying to create — something rigid and structured and geometric but also softer, to give some more organic shapes you can intertwine with the geometrics.”

Barrett pointed out that trousers and shorts are cut a tad slouchy with drop crotches, and “always with a little bit of ankle showing, which is very much [reflective of] that period when I ended university in ’95 and went to Prada.” To create a balance, tops and outerwear are cut smaller with soft shoulders and silhouettes that are still easy to wear.

The designer said he used mainly lightweight fabrics, including “a lot of cottons, cotton-linens, cotton-viscose blends, Japanese fabrications, Korean fabrications, either textured or very smooth or just with a great memory, all the Italian versions,” he said, adding that to guarantee the best fit, the company developed 60 percent of the fabrics in the collection itself.

A liquid ink motif — which Barrett described as “throwing ink into water” — appears across the entire collection on T-shirts, shirts, bombers jackets and raincoats, as well as on layering pieces with sheer effects.

“Everything is cut with this strip, a band, like a tape, it’s a very strong note in the collection,” Barrett added. “I didn’t want to have so much embellishment. We cut everything with these strips so there are strips on every garment you can imagine, because that’s simple enough…a graphic that I would actually use and actually wear. They’re quite super graphic but super simple. They can be prints, intarsia, jacquards, they can be embossed. I’ve played with the strip in every way possible.”

The accessories include “backpacks with lots of hardware on the straps,” as well as lace-up moccasins, flat-soled shoes and a more bold hybrid style, a combination of a trainer and a cowboy boot.

The restrained color palette is focused on the brand’s signature tones of navy, white, black, military green and beige with bright accents of red, yellow and cobalt blue, as well as chalk and metallic silver touches.

The upcoming runway show will also include 15 women’s looks with 40 men’s outfits.

“It’s one story developed in a more feminine way, with a lot of tailoring and one extra element to make it more desirable, more feminine, more fluid,” he said. “Then there are a lot of dresses just to show that side of the company which I think is necessary for building the brand.” Last year, he said he realigned the design of the women’s with men’s wear “and now we are focusing on realigning all the timing. I really believe that the current system is devouring the energy and sucking dry not only the designers, but the teams and all the people who work around production, PR. So we’re already getting it sorted out, aiming to style and do everything for the show before pre-collections.”

In addition to expanding women’s wear, which currently accounts for 20 percent of the company’s business, the designer this month unveiled the Black Barrett ath-leisure line and is about to debut the first children’s collection, developed under license with Italian manufacturer Daddato, at the upcoming Pitti Bimbo trade show. The brand also does skiwear and swimwear.

“Everything has its home now and it’s funny keeping the DNA under one roof and finding the right place for each idea so we can dress our clients for every occasion in their life,” said Barrett. “[Before having this building] I felt that I had a very articulated collection in the different areas but they didn’t have a home and a method to show them. I had the feeling that the amount of work and time I’ve spent in creating them and the incredible workmanship that you have with the Made in Italy [production] were not shown off in the best ways. So this building can actually house under one roof and in one showroom the fitness athletic collection, the kids’ collection, the women’s collection, the tuxedo collection, the formal collection, the show… it’s all in one area. You can take this brand and make it supermodern, classic or you can it take it very formal.”

Retail expansion is also key for Barrett over the coming months.

“From July onward, our main focus for part of the team is to start finding investments for retail. We’ve already worked out how to do it and we’re just in contracts at the moment so once we have that sorted, that should be going from July through to September and then we can start investing in opening retail,” said the designer.

The company has 20 stores across Asia, as well as boutiques in Milan and Mykonos and a corner at London’s Harrods. “That’s the big next step. It would seem to be a waste of time to do retail when you’re not at this first. Everything was based around opening this first [the headquarters].”

He expects the next store to open in Europe by the end of the year.

“Now it’s the right timing, everything is coming together now. It’s melding together now, so it’s a very positive moment and very exciting moment,” he said.

Ones to Watch During Milan Men’s Fashion Week

The Boys of Milan