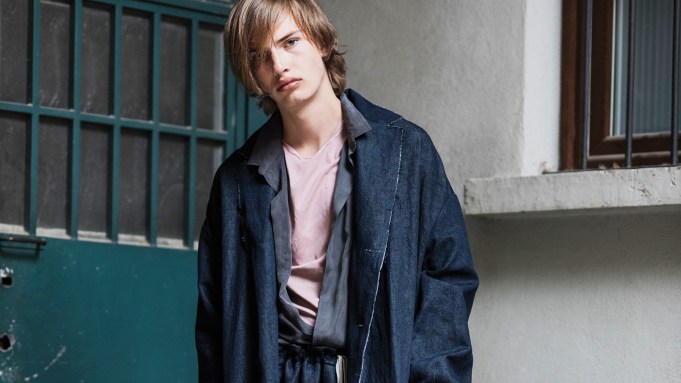 “The goal of my work is to build a house for people’s bodies,” said Miao Ran during an interview at the headquarters of his namesake brand in Milan.

The designer, who moved to Italy from northern China eight years ago, will unveil his new collection with a show at the Armani Theater on June 18.

“I really think that fashion needs to be functional to the body shape, and this is the reason why my approach to work always starts from the definition of silhouettes,” said Ran, who graduated with a degree in fashion design from Milan’s Politecnico University. He also has a degree in model-making from fashion school Carlo Secoli.

Deeply rooted in a minimal aesthetic, Ran develops genderless collections with sizing that ranges from zero to 5.

For spring, the Chinese designer’s fourth collection is inspired by deep-sea creatures. This translates into colorful embroideries that appear on a range of pieces such as a macramé coat. Outerwear plays a relevant role in the collection with raw-cut coats worked into a heavy cotton canvas or denim, as well as more fluid styles with a robelike effect. These are paired with oversize pants with elastic bands at the waist and cuffs. Channeling a subtle streetwear theme, Ran also combines a bomber in crinkled cotton with metallic threads and coordinated Bermuda pants.

The color palette, which focuses on traditional tones of blue, white, black and military green, is softened by shades of pale pink and ocher. — ALESSANDRA TURRA

Anselm Kiefer is an artist known for mining the darker chapters of German history and producing highly textured pieces incorporating materials such as straw, ash and clay. Jun Li, a Chinese designer who launched his own atelier in 2014 after honing his skills at a bespoke tailoring shop in London, turned to the neo-Expressionist artist for inspiration this season.

“It’s about the force of destruction that inspires and urges its counterbalance — the power to re-create. I have a lot of respect for tradition. On the other hand, I also tend to break it,” said Li, who sketched a spring look featuring a long coat with oversize lapels.

Kiefer’s mixed-media approach also appears to resonate with Li, who said he favors fabrics with a special texture such as virgin wool mixed with silk for his sharp, sophisticated takes on tailored items. “I like fabrics with special textures. They often surprise you with their touch, which might be totally different from how they look,” explained the London College of Fashion graduate.

Li said he is heading into his show on June 20 at Milan Men’s Fashion Week devoid of any expectations and that for now he’s just concentrating on presenting a strong show.

“This is a great opportunity to present my work to the world. At the same time, it’s also a big challenge to be well-prepared within such a tight schedule,” said Li, who sells at Vertice London and Daad Dantone Milan. “Taking the challenge itself helps me to build my brand.” — AMANDA KAISER

Malaysia-based designer Moto Guo said he approaches his work with a sense of “cynical, self-deprecating humor.” Appropriately enough, his spring preview look consists of an oversize pair of pink corduroy culottes, cheekily accessorized with…well, with nothing. Back to the camera, his guy is going shirtless.

Guo, a graduate of Raffles College of Higher Education who was a classical musician before moving into fashion, posits himself as something of a storyteller, spinning a tale each season. For fall 2016, he transported a “pencil pusher” to an alternate universe, providing cartoonish takes on office wear. He turned out a sporty, Seventies-inspired lineup for spring centered on a fictional character named Lulu, who is “jaded, confused and facing an identity crisis.” (Gender neutrality is part of the brand’s ethos, according to a spokesman.)

Guo offered up a somewhat more cryptic story behind this season’s effort: “My realization of the importance of teamwork and exploration into the reality of the ‘society,’ which is a metaphor of the fashion industry in the collection,” said the designer, who added that he likes to inject a dash of sarcasm into his work.

But the designer seems prepared to approach at least one topic seriously — the fact he’s hoping to capitalize on his Milan show, on June 20, to grow his label. For both he and Li, the invitation to fashion week came by way of Vogue Italia editor Sara Maino, who introduced him to the Camera Nazionale della Moda Italiana. For now, his brand counts just a few sales points, including Cuevolution, in Kuala Lumpur, and Please Do Not Enter, in Los Angeles.

“The connections, the exposure, the expansion of our market,” he said. “I’m sure the entire experience is going to be rather remarkable and it will open a lot of doors. We can’t wait to be overwhelmed by it.” — A.K.

The son of entrepreneur Renzo Rosso and the creative director of Diesel licenses, Andrea Rosso launched Myar at the end of 2014. Stemming from his passion for military fashion, the line started as a pants label but is now extending its offer to shirts, T-shirts and jackets.

“There is something sustainable about this,” Rosso said. “The idea is that you give new life to something from the past.”

According to Rosso, research — especially in Italy, the Netherlands and Poland — is a crucial step in the design process. “It’s not easy to find big quantities of the same model,” he said. “In addition, the most common sizes are the most difficult to find. It’s easier to find the very small and very large.”

In order to preserve the story of each piece, all the pants and tops come with a pouch containing the original pieces of fabrics that have been cut for restyling and refitting.

The new collection, for example, includes pants from the American Army that date back to the Korean War; Greek Army pants from 1949, as well as British shorts.

The collection is currently sold in select stores across Japan, Italy and Germany. “I personally take care of establishing relationships with retailers since I think it’s key they understand exactly what’s behind this brand,” Rosso said. “But sometimes the biggest challenge is to make them understand this project is not related to Diesel,” he stressed. — A.T.