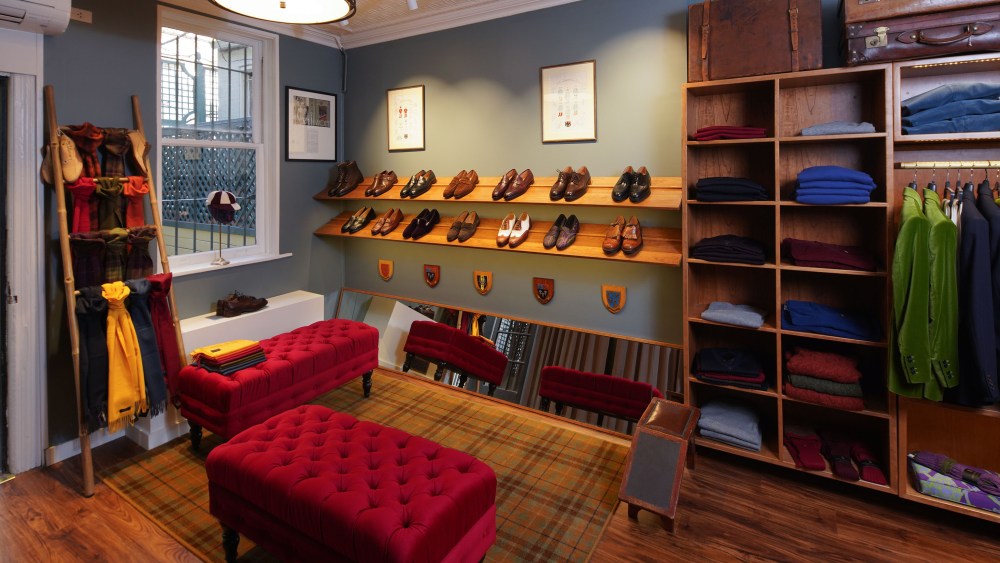 On Thursday, New & Lingwood, the men’s wear brand that traces its history to Eton High Street in 1865, opened the door of its first store in the U.S. The 2,300-square-foot, two-level unit at 970 Lexington Avenue, between 70th and 71st Streets, is only the third location for the label and joins the original 153-year-old shop in Eton as well as the flagship that has been on Jermyn Street in London since 1922.

The New York store offers ready-to-wear and furnishings on the main floor — including a vast selection of socks — and made-to-measure, formalwear and limited-edition silk dressing gowns on the second level. The store also boasts an unusual feature for Manhattan — an outdoor garden in the rear, which New & Lingwood can utilize for events in the nice weather.

New & Lingwood is one of several U.K. brands to make a move to Manhattan. In June, Harrys of London, the footwear and accessories label, opened a boutique at Park Avenue and 57th Street. Harrys is owned by billionaire real estate developer Charles Cohen, who also owns a majority stake in Richard James and is close to opening a 2,000-square-foot flagship for that brand next door. The Richard James store is expected to open in early December.

New York is proving to be a successful landing spot for men’s wear brands from across the pond. Alexander Duckworth, one of the owners of New & Lingwood, said, “We had a pop-up on Madison Avenue and 67th Street last holiday season and we were encouraged enough to look for a full-time space.”

Duckworth, who oversees marketing and branding for New & Lingwood, is one of three principals of POP Capital, a U.S.-based private equity firm that purchased the brand in 2015. His partners are his cousin, Elijah Duckworth-Schachter, who focuses on finance, and former De Beers executive Ray Simpson.

The New York store offers the core New & Lingwood product as well as some other U.K. labels such as cigars from Highclere Castle, otherwise known as Downton Abbey; whisky from J.J. Corry; paint and wallpaper from Farrow & Ball, and jewelry and leather goods from Asprey.

“We’re looking at it as less of a rack-and-sell and more of an experience with the garden and the Kingsman-esque sock wall,” he said.  New & Lingwood merchandises its socks in cubby holes on the back of a secret door that leads to the staircase to the second floor.

Duckworth-Schachter said he expects the socks, which retail for $45 to $85 — more for cashmere — to “just fly off the shelves.” Other items that are expected to be popular are the elaborate dressing gowns, which sell for $2,000 to $4,700, and the sport coats, which have distinctive linings and details.

The company was founded by Elisabeth New and Samuel Lingwood, coworkers who eventually married and created a brand that combined their names. New & Lingwood was established to serve the students of Eton College, and soon gained official status as outfitters to the college. The relationship continues today and it provides some 140 sporting colors to its teams, houses and societies.

Duckworth-Schachter said that under its prior owner, a South African businessman, the relationship with Eton wasn’t evolving. In addition, the other brands that New and Lingwood acquired over the years —  shoe and bootmaker Poulsen Skone and bespoke shirtmakers Bowring Arundel among them — were also dormant.

Eventually, he said, POP Capital hopes to reintroduce these labels. But for now, the focus is on New & Lingwood.

Duckworth said that with the exception of a few years in the Nineties when it wholesaled to Barneys New York, New & Lingwood has not had a presence in the U.S. market until now. “But we know that we have a strong customer base in the U.S. We chose this location because we were able to analyze the zip code and knew that it was a very good one for us.”

Their customer is in his late 30s to early 60s and “knows enough about men’s wear to know what to look for in quality,” Duckworth said. He’s either conservative and seeking a little fun surprise in the linings and details, or a true dandy who embraces “outlandish” fashion to make a real statement.

That is available both off-the-rack and in made-to-measure at the store. In fact, New & Lingwood has an entire book of tartan fabrics along with others of colorful linings. Prices for made-to-measure range from $2,400 to $4,000.

Tailored clothing is either semi-canvassed or soft constructed in English or Italian fabrics, trousers are half-lined. Shirts have a 12-piece collar, French seams, split back yoke and reinforced side seam gussets. Shoes are handmade by English and Italian craftsmen, neckwear is offered in silk and is lined, and there are both mid-calf and longer length socks in myriad colors and patterns.

In terms of additional retail stores, Duckworth-Schachter said he envisions eventually adding a “handful” down the line. “But they’ll be in geographic regions that we consider interesting such as Charleston or Richmond, Va., where the dandified look is important,” he said.